Kansas Governor Laura Kelly on Friday signed SB 13 into law, providing property tax transparency that goes into effect this year.  Kelly vetoed a similar bill last year but the overwhelming majority votes in the House and Senate may have been a factor in her decision to sign the bill and avoid a veto override.  The House passed the bill 120-3 with a few modifications to the Senate bill that passed in January.  Senators concurred with the House bill by a 30-5 vote.

SB 13 was modeled after Truth in Taxation legislation in Utah and Tennessee, which have had property tax transparency in place for over 30 years.  A collaborative effort organized by Senator Caryn Tyson in 2019 brought together legislators, policy experts, property owners, and local officials to craft a solution to taxpayers’ strong desire for transparency.  Kansas is now the third state in the nation with property tax transparency.

When new property values are set this year, mill levies will automatically be reduced so that the new valuations bring in the same dollar amount of property tax to cities, counties, and school districts as in 2020.  If local officials want to increase the revenue-neutral mill levy, they must notify citizens of their intent, hold a public hearing to accept input, and then vote on the entire property tax increase they impose.

SB 13 also does away with the so-called property tax lid, which required public approval to increase property tax by more than inflation.  The lid was rendered almost meaningless, however, by a long list of exemptions that allowed cities and counties to avoid the public vote requirement.  The new Truth in Taxation law has no exemptions.

Property taxes increased far more than the rate of inflation over the last 23 years.  The average county increased property taxes by 180% between 1997 and 2020, while inflation was 53% and the population grew by just 11%. 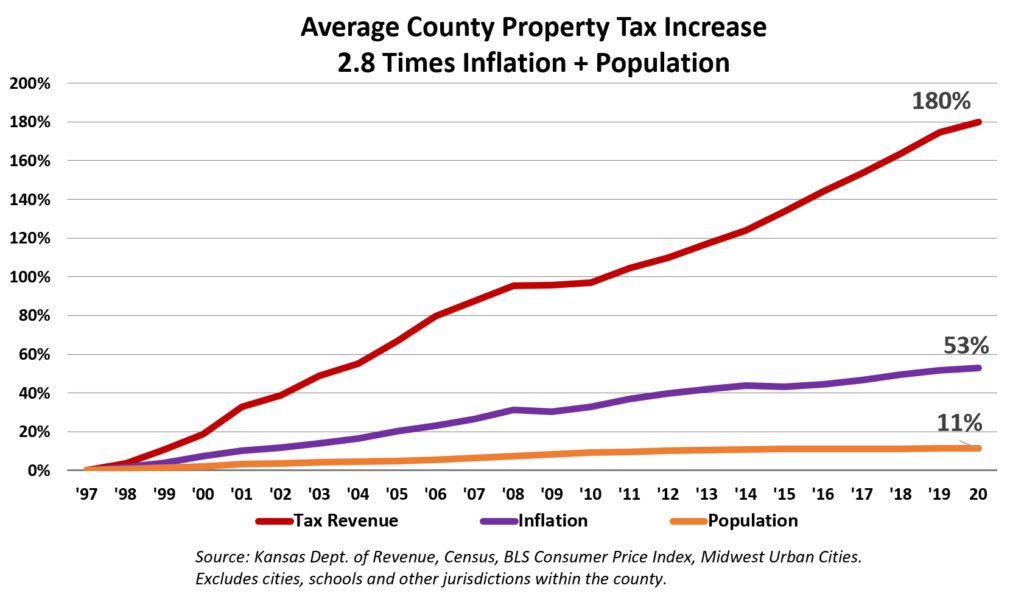 Property tax increases for every county and many cities, with comparisons to changes in mill levies and population are available on KansasOpenGov.org.

Local officials have long maintained they have been ‘holding the line’ on property taxes, referring only to mill levy changes, while ignoring the property tax hikes due to valuation changes.  This has created an ‘honesty gap’ in taxpayers’ minds. 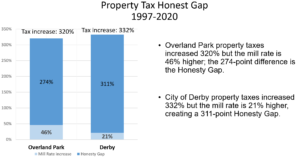 Honesty gaps are also available on KansasOpenGov.org; counties are here and the city list is here.