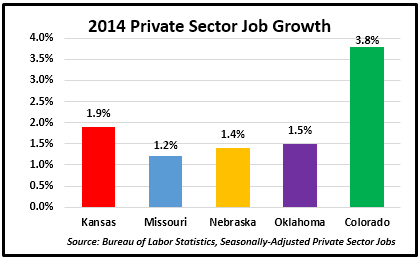 Revised data from the Bureau of Labor Statistics shows that Kansas had better private sector job growth in 2014 than neighboring states of Missouri, Oklahoma and Nebraska. Colorado was the only neighboring state that did better, as it has done for thirteen of the last sixteen years. Kansas also outperformed Iowa and Arkansas, both of which had job growth of 1.5%. BLS annually updates data for prior years.

Kansas also outperformed Missouri in the Kansas City Metro Area, with job growth of 3.0% on the Kansas side of the metro vs. 1.7% on the Missouri side. See here for more information on the metro comparison.

A longer-term look at the data shows that Kansas achieved private-sector job growth of just 2.2% in the 14 years from 1998 through 2012. This growth rate amounted to just 61% of the 3.64% job growth its income-taxing peer states experienced. Yet, in the two years post-tax reform, from December 2012 to December 2014, Kansas has become much more competitive, achieving private-sector job growth of 3.71%, or almost 88% of the growth its income-taxing peers achieved.

Check back soon for our next jobs update, in which we will examine job growth in Kansas for the first quarter of 2015.