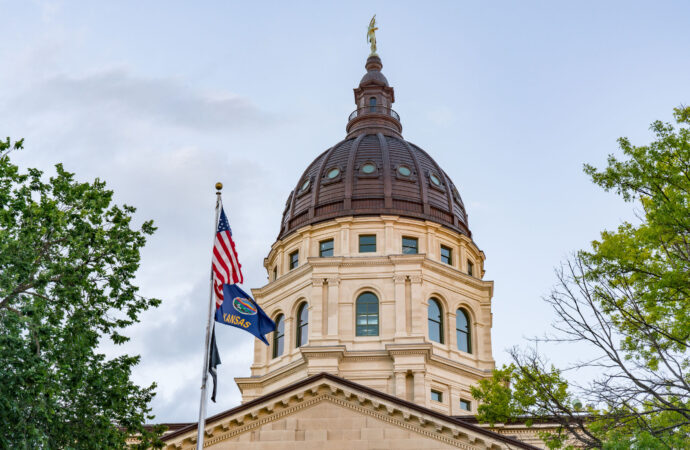 In October 2022, Kansas was on track to recover to January 2020 job levels by the end of this year. However, November’s job report fell flat on these expectations. The state lost 1,000 private-sector jobs, with a job growth rate worse than 41 other states. This month, Massachusetts and Oklahoma joined 27 other states that have recovered to their pre-pandemic job levels while Kansas remains below. To keep up in the foreseeable future, Kansas needs to adopt reforms to its economy to be more in line with North Carolina and South Dakota, which are two of the fastest-growing states in the country. Otherwise, the slow job recovery is a bad sign of weak economic growth.

If Kansas continues to grow at the same rate it has since January 2021, the state will fully recover from its pandemic losses by early next year. Whereas, 29 states have already recovered to their pre-pandemic private sector employment levels. 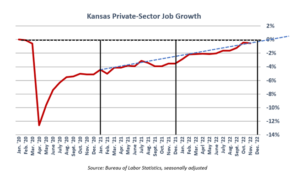 Most industries in Kansas had sizable job losses, including Leisure and Hospitality losing 1,700 jobs, Education and Health Services losing 1,100 jobs, and Financial Activities and Trade, Transportation, and Financial Activities sectors lost 800 jobs each. Manufacturing gained 1,200 jobs, and Professional and Business Services gained 1,800 jobs, but not enough to offset the losses in favor of job recovery. The definitions of these industries are outlined by the Bureau of Labor Statistics.

At the same time, the government grew by 600 jobs, primarily at the local level.

Kansas is stagnating with slow job recovery while others are prospering because of competitive tax reforms other states have undertaken.

For instance, North Carolina is the third highest target in domestic migration, after Texas and Florida, and has a booming economy whose private-sector job levels are 6.0% higher than in January 2020. That largely stems from a decade of tax reform, starting with reductions of the corporate income tax rate with a phase-out planned by 2029 and then a flattening of the income tax to 5.8% in 2014 and later 4.99%. These bipartisan reforms have resulted in an influx of venture capital investment, job growth, and prosperity. A low cost of living and affordable housing has helped in the move, but free-market reforms like changing exclusionary zoning laws and reducing prohibitive regulation are key to keeping homes built at an affordable selling price.

Rapid City, South Dakota was the fastest-growing city in the Midwest this year, growing at triple the national average from 2020 to 2021. It’s not hard to see why: South Dakota can afford a low-tax, high-growth economy because of a tight budget. The state has the lowest amount of unfunded liabilities in the country and no outstanding general obligation bonds because of strict control of the pocketbook. This means more room for tax relief, and South Dakota has been able to keep itself income and death-tax free. Though the discipline to keep spending low is something that requires a decades-long commitment from legislators, it’s necessary to see the benefits of tax relief come to fruition.

The trend of economic stagnation is decades-long in Kansas and will not be turned around overnight. And yet, things like common-sense government spending, lower taxes, and updating regulations for a 21st Century economy could certainly help turn the tide to help families now and set out a vision for the next decade.