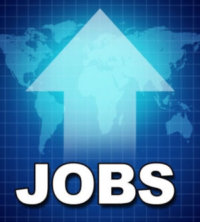 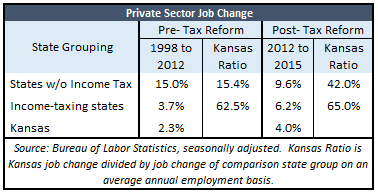 These gains may not be the ‘shot of adrenaline’ predicted by Governor Brownback and while it’s fair to criticize any political prognostication, some perspective is also in order.  His statement accompanied passage of a massive tax reform package that was never fully implemented.  The plan passed in 2012 could have been implemented with a one-time 8 percent efficiency improvement in state spending but Governor Brownback, Democrats and many Republicans resisted cost reductions, which resulted in a tax increase and higher spending in 2013.  The same happened again in 2015.  There is still a net reduction in the tax burden, but nowhere near what was passed in 2012.

Honest measurement of whether something is ‘working’ requires the elimination of unrelated factors, such as government employment.  Tax reform was not intended to grow government bureaucracy so we look at private sector employment rather than Non-Farm (which includes government).  The private sector composition also varies considerably from state to state, so it’s also important to examine changes in certain sectors for relevance.

Kansas, for example, is much more dependent upon aerospace and Mining (which includes oil and gas, forestry and other mineral extractions) than most states, and those sectors

have been hit hard recently for reasons unrelated to state tax policy.  Missouri meanwhile benefited from thousands of auto manufacturing jobs being restored, but Kansas doesn’t have enough jobs in that sector to meet minimum reporting requirements.  Looking at the remainder of the private sector workforce for neighboring states (at least 96 percent of total), Kansas outperformed Missouri, Nebraska and Oklahoma over the last three years and trailed Colorado (which has been the case for a very long time thanks in part to their controlled spending and lower taxes).

Similar analysis shows that the Kansas side of the Kansas City Metropolitan Area also grew faster than the Missouri side between December 2012 and December 2015.  The Kansas side of the Metro grew by 6.9 percent compared to 5.9 percent in Missouri (i.e., jobs grew 17 percent faster in Kansas), but the Kansas advantage is even greater after considering two major anomalies that are unrelated to state tax policy.  Telecommunications jobs were lost in both states, but the Sprint layoffs in Kansas had a much greater impact.  The Kansas advantage widens to 23 percent (7.5 vs. 6.1) with this anomaly removed.

The Missouri side also benefitted from Ford adding 4,300 jobs to its Claycomo plant in response

to national demand for F-150 pickups and other vehicles.[i]  The Bureau of Labor Statistics provides a breakout for auto manufacturing at the state level but not for the Kansas City Metro, so it’s unknown if BLS has the accurate number of auto manufacturing jobs in their Metro market total.  But if so, the Kansas advantage widens to 44 percent (7.5 vs. 5.2) when telecommunications and the Ford increase are removed.  Total jobs less Telecom and Auto account for 99 percent of the Kansas side of the Metro and 98 percent of the Missouri side.

FYI, recent media reports regarding Metro job comparisons included government jobs, made no consideration for the above anomalies and only covered a one-year period from February 2015 to February 2016.

To be clear, this is not presented as evidence that Kansas’ tax reform is ‘working.’  It will take several more years of data before extensive analysis can begin to fully comprehend the incremental benefits of Kansas having reduced income taxes.  On the other hand, those claiming that tax reform isn’t working based on a simplistic average job growth that includes government are not basing their claim on sound economic analysis.  That’s just politics.