LeBron’s “I Promise” school – a model Kansas should emulate

There will be no mention of basketball in this essay despite the fact that as a Phoenix Suns fan throughout my adult life, nothing could be worse than LeBron James joining the despicable, hated Los Angeles Lakers. (If there any Suns fans out there, you know exactly what I’m talking about.) Ok, that’s the only one. I promise.

The LeBron sponsored “I Promise” school in his hometown of Akron, Ohio has garnered almost as much attention of late as LeBron’s move to La La Land. Unfortunately, most of the focus has been on LeBron himself, and not enough on the remarkable potential the school model has for public education.

-“I Promise” is a public school, not a private school. And it is not a charter school, it is a partnership between the LeBron James Family Foundation and Akron Public Schools.

-The school is beginning as a third and fourth grade school with 120 students in each grade. A new grade will be added each year until the school goes through the 8th grade.

-Similar to a charter school, the students are selected by lottery and must fit the district’s definition of being at-risk.

-The school will have longer days – from 9:00 to 5:00 – and offer a variety of family support services, aimed to keep students in school.

-The Foundation is not footing the entire bill for operating the school, that is left up to the district. Initially, about $500,000 is being donated, a figure that will increase to about $2 million when it grows up to eighth grade. In fact, according to the Cleveland Plain Dealer, the district will ultimately be paying for about 75% of the cost.

-Teachers, administrators and other employees will be employed by the district.

-Students are also promised free tuition at the University of Akron. However, according to the Plain Dealer, the university will be picking up that tab, not James. 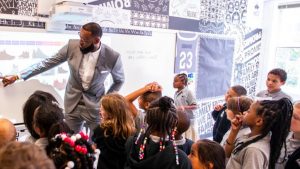 It goes without saying that the James model is student focused, not institution focused. James himself was at-risk in elementary school, claiming to have missed 83 days of school in fourth grade as his mother was struggling with issues being a single parent. That is clearly a major influence in his approach that is from a student’s, rather than a school’s, point of view. He doesn’t see the at-risk problem as one that can be solved by giving blanket money to public education and allowing them to spend it as they see fit, as is the Kansas approach. That lesson should have been learned when Mark Zuckerberg donated a staggering $100 million to the Newark school system to spend as they please, an effort that even the Newark mayor called a failure.

The “I Promise” model could be, and should be, emulated here in Kansas. And it doesn’t need a multi-millionaire celebrity benefactor to make it happen.

The Kansas Legislature can make that change. During the next session, when all indicators point to adding yet more money to public education at the behest of the Supreme Court, they should make it count for something this time. Instead of just perfunctorily adding more base state aid to appease the Court (and the educrats), the money should be targeted to establish “I Promise” models in a handful of districts. Those districts could set up a school such as Akron did to serve and entire population of at-risk students – after all, isn’t that what at-risk funds are for?

The Legislature should designate all or a portion of Gannon VI (or would it be Gannon VII?) money to that approach. Certainly Wichita, Kansas City, Topeka, and even non-urban areas like Garden City and Dodge City – schools with significant at-risk populations – could create their own “I Promise” schools. Considering that LeBron’s foundation is actually paying a relatively small amount of running the school, the $100 million or so the Legislature is predicted to pony-up to satisfy the Supreme Court could easily fund several student-focused improvement model schools.

It’s far past time to finally take a serious approach to improving the achievement of at-risk students. While they

continue to lag at unacceptable levels behind other students, the State Board of Education and KSDE are playing space games with their “launch to the moon” program, a school redesign effort apparently inspired by the Blues Brothers that is embarrassingly empty next to the “I Promise” approach. “Launch to the moon” is nothing more than a silly diversion that will make no difference in the success of students. It is the antithesis of the “I Promise” approach, putting focus on the institution of public education, not the students they are charged to serve.

A recent study of from the University of Pennsylvania Graduate Education School is an echo of the “I Promise” approach. The researchers conclude that states across the country need to begin a student focused approach and not institution focused if public education is to adequately prepare students for their futures.

With the spotlight on LeBron’s approach, it’s high time the Kansas education establishment remove the dark glasses and see clearly their failure to address the needs of our at-risk students. Gimmicks simply don’t cut it.