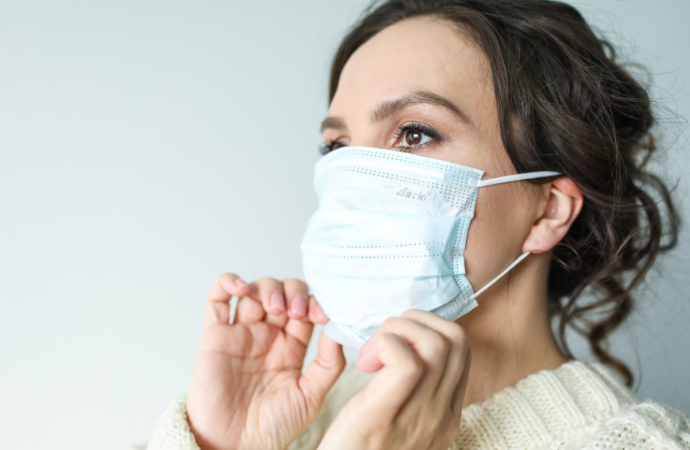 The Governor’s seemingly endless call for a statewide mask mandate demonstrates a belief that Kansans cannot make wise decisions independently. However, two independent surveys find at least 90% of Kansans in no-mandate counties wear a mask in a public setting at some frequency. The Governor made the right call to forgo a state mandate and allow local control and personal freedom to fight COVID-19. Surveys show Kansans exhibiting free choice has achieved what Governor Kelly was seeking to coerce.

In early July, the New York Times surveyed 250,000 residents in all U.S. counties about their respective mask-wearing. They asked Kansans how diligently they wore a mask. Responses were recorded as “Always,” “Frequently,” “Sometimes,” “Rarely,” and “Never.” At nearly the same time, Governor Kelly signed a statewide mask mandate with 80 Kansas county governments opting out. The Kansas Policy Institute pulled the Kansas survey responses and aggregated them for the mandate and no-mandate counties.

The Kansas Speaks Survey, from Fort Hays State,  further corroborates these findings. The survey uncovered “93.5% of respondents wore a mask or face covering in stores or other businesses all or most of the time in the past month.” In other words, Governor Kelly’s July mandate had little effect on Kansan’s decisions to mask-up. Additionally, these 90+ mask-use rates have two implications.

As the Sentinel, which KPI owns, outlined, counties with mandates saw cases increase 582% between June 29 and October 19 versus a 260% increase in the counties without mandates. Additionally, Governor Kelly recently used the situation in Norton County to justify a new statewide order. However, Norton news reports speak to COVID case growth in nursing homes and correctional facilities. The nursing home in Norton exhibited poor COVID-19 practices with no state inspections for four months.  The Norton correctional facility has been under a mask policy for staffers since April.

On the day Governor Kelly called for a statewide mandate, another governor also responded to calls for a statewide order, Kristi Noem of South Dakota. In an opinion column, Governor Noem said this about mask mandates.

…South Dakotans should take the time to read this information [on masks] so they can make informed decisions for themselves and their families. As I’ve said before, if folks want to wear a mask, they should be free to do so. Similarly, those who don’t want to wear a mask shouldn’t be shamed into wearing one. And government should not mandate it. We need to respect each other’s decisions – in South Dakota, we know a little common courtesy can go a long way.

To be clear, this isn’t about whether masks work or not. It’s about whether Kansans deserve the freedom to choose for themselves. Since March, the Governor’s repeated calls for mandates and shutdowns are about control. A KU economist and advisor to Laura Kelly,  Donna Ginther, unknowingly proves this. Her analysis “found” the Governor’s mask mandate worked because it assumed Kansans didn’t wear a mask until told to do so. Not only do surveys reveal this premise is false, but Ginther’s analysis subtly insults Kansans and their freedom to choose what’s best for them. In combatting COVID-19, the best policy decisions come from those closest to the people; local government. What’s more, Kansans are masking up on their own regardless of mandates from elected officials.