No, KSBOE, Kansas doesn’t ‘lead the world’ in education 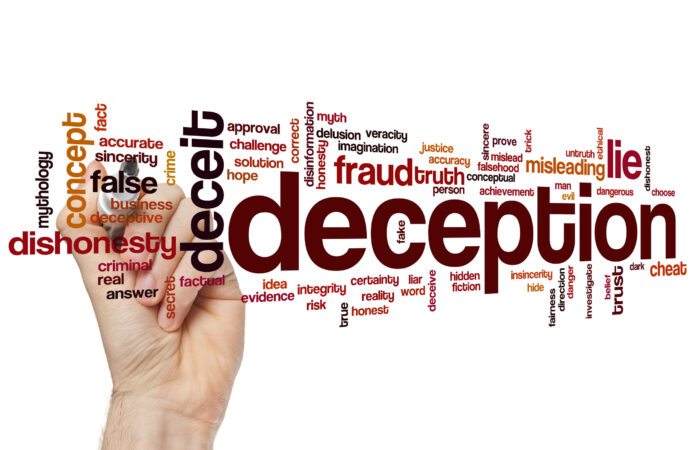 A recent mailer distributed by the Kansas Board of Education and the Department of Education (KSBOE)implied that Kansas “leads the world” in the success of every student.  But that’s not true.  According to the National Assessment of Education (NAEP), Kansas doesn’t even lead the region or the nation, let alone the world.

Kansas is below the national average of student proficiency in seven of the eight primary measurements and trails Missouri in five categories.  National rankings range from a best of #19 to the lowest ranking of #34.

Low proficiency levels in the early years lead to even worse results in high school.  For example, only 23% of Kansas graduates who took the ACT in 2020 were considered college-ready in English, Reading, Math, and Science.

Lest there be any doubt about KSBOE embracing NAEP results, the Department of Education issued a press release in 2011 say NAEP results since 2003 are “valid and reliable.”

The mailer deceptively says “education in Kansas is among the most rigorous in the nation” but the graphic referenced is from a NAEP analysis that compares standards on the state assessment test to NAEP standards.  It means that Kansas and NAEP set their cut scores for proficiency at about the same level. That’s like saying they both use 90-100 for an “A” but that has nothing to do with how students scored on the test – it’s just a grading scale. 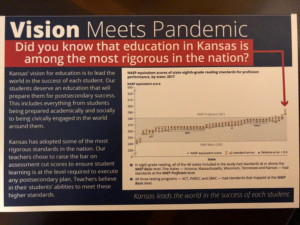 The headline on the KSBOE mailer – Vision Meets Pandemic – is not explained.  But parents and students have been sharing their extreme dissatisfaction with local school boards and legislators throughout the pandemic.  Parents’ vision is for full-time in-person learning that prepares graduates to be on track for college and career, not ineffective remote learning that many students have had to endure for nearly a year.

By the way, this isn’t the first time or even the second time that KSBOE and individual board members have tried to deceive the public.

KSBOE approved the ‘lead the world’ campaign, also known as Kansans CAN, in 2016.  At the time, my colleague David Dorsey likened it to rearranging the deck chairs, and he was right.  Almost five years into the plan to ‘lead the world,’ achievement went backward. 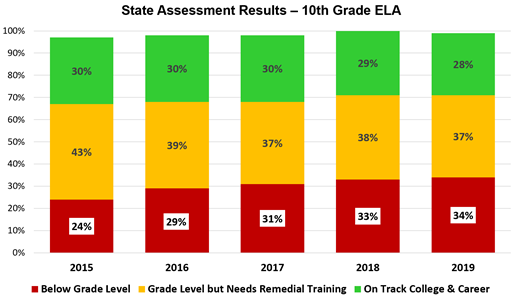 No assessment was given in 2020 because Governor Kelly closed schools in the spring.

The 2019 Math results show tiny improvements (42% below grade level, now down to 41%, and 25% on track compared to 23%).  But those little gains aren’t enough to offset the declines in English Language Arts. 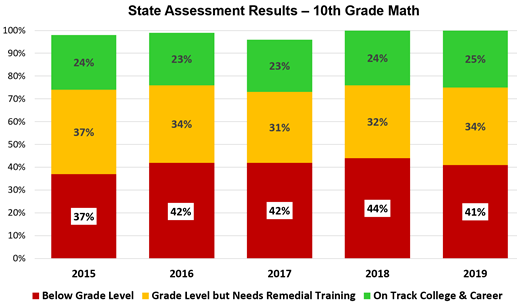 Part of the reason that achievement isn’t improving under ‘Kansans CAN’ could be related to the plan’s Outcomes to Be Measured, none of which measures academic improvements between kindergarten and graduation –  which should be the goal of public education in Kansas:

A high school graduation rate is meaningless; with more than a third of 10th-graders below grade level, it’s a sure bet that some students are still below grade level when they walk across the stage.  It’s not an accident that improving state assessment results and closing achievement gaps are missing in action; education officials are moving away from accountability at every opportunity.

The education lobby in Kansas (state and local school boards, administrators, unions, mainstream media, the state department of education and KSBOE) and has been perpetuating its own version of the ‘cancel culture’ long before it became fashionable.  The USD 259 school board in Wichita slipped once and publicly said they would not tolerate disagreement.  Parents voiced extreme displeasure with the Board’s decision to build new schools and close others in 2012 during the public input section of the meeting. Board President Betty Arnold threatened to clear the room if parents didn’t stop criticizing board members, saying, “This board meeting is being held in public, but it is not for the public, or of the public.”

As long as the education lobby keeps people believing schools are underfunded, the focus stays on the money.  But the unnecessary cancellation of in-person learning in some school districts has helped parents understand that achievement isn’t quite what they’ve been led to believe; they’ve seen first-hand how their children struggle as they try to learn from home.

As a result, there is overwhelming support for money-follow-the-child programs in Kansas, and that may be motivating the education lobby’s latest effort to mislead parents and legislators.  Legislation has been approved by House and Senate education committees that expand the tax credit scholarship program for low-income kids; another bill creates education savings accounts for students deemed academically or financially at-risk or for students in schools that aren’t offering full-time in-person learning.

By a margin of 2 to 1, voters believe school funding should follow the child to allow educational options that meet each child’s needs.  And these programs work!  Go to Giving Kids a Fighting Chance for more information.

The education lobby is diametrically opposed to better opportunities for students because they want the money currently generated by those kids to go to only one place – the zip-code designated public schools.

It’s abundantly clear that nothing will change for students unless the Legislature intervenes and provides kids with better options – and many of them at least privately acknowledge that sad truth.

The only question, I suppose, is how many more generations of students will be left behind before enough legislators stop worrying about the education lobby coming after them in elections.