Between memories of “I’m Just a Bill” and “Mr. Smith Goes to Washington” we all have visions of how the legislative process is supposed to look. Soaring rhetoric and epic clashes of statesmen, and women, doing battle over the issues of the day. The slow, deliberative process of a bill going from the committee, to the chamber, and so on until it reaches the executive’s desk.

But those idealized versions skipped over an “sausage making” aspect of legislative happenings that also inform our visions of the process – the cold reality of petty squabbles, bureaucratic inertia, and electoral politics.

To be sure, some issues of substance are being addressed and others have the backing of many legislators, but are being held back for various political reasons. My personal favorite, “We can’t touch that bill. Its an election year!”

A quick review of KPI’s Freedom Index makes clear that lots of substantive bills promoting economic freedom and student-focused education haven’t even warranted a hearing, or remain stuck in committee. 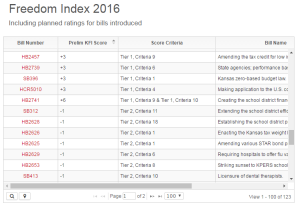 The point isn’t that many of the unheard bills are manifestly positive on the Freedom Index. Most of the bills on the KFI have a preliminary score of either a -1 or a +1, maybe a few even reach 2 points either way. Bills with higher relative scores 3+ points, either way, are much rarer on the Freedom Index and demonstrate a more-significant impact. Of course, our preference is for the higher positive bills to move. But, just the same a high NEGATIVE score also demonstrates the relative impact of a bill and, presumably, is important to someone.

There is always a fair amount of legislation on the cutting room floor as legislative deadlines pass. It is the importance of many of those bills that are not brought up that may surprise most Kansans. It’s fine to recognize sports teams for winning a championship or a community group for doing a good turn, but not if it means there’s limited time to address important matters of policy.

The Legislature wrapped up this week and won’t return until Veto Session, at the end of April, but there is still much heavy lifting to be done. Hopefully time will remain to vote on many of the good bills still to be considered.