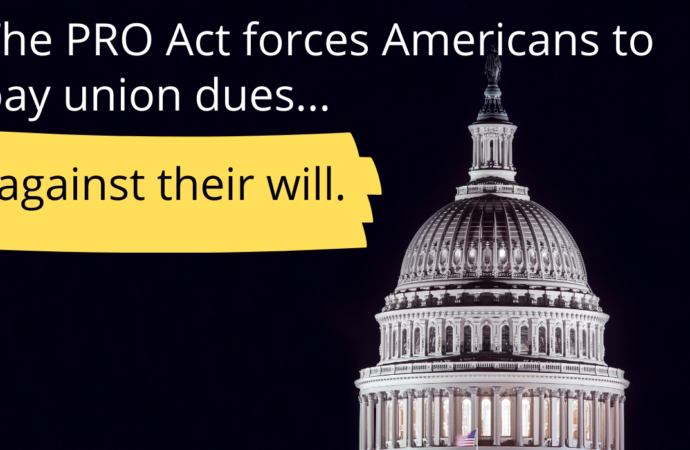 President Joe Biden promised to not increase taxes on the middle class, but his gift to organized labor, the Protecting the Right to Organize Act (PRO Act), has the same impact as a tax increase on millions of Americans.  The PRO Act does not protect anyone’s right to organize; those rights already exist.  Quite the opposite, it strips employees of their right to not associate with a union and forces them to annually pay hundreds of dollars to unions against their will.

Currently, people living in Right to Work states and working for a unionized private-sector company are not required to join the union or pay dues.

But Biden and House and Senate Democrats want to strip private-sector Americans of their right to choose and compel expensive union membership in companies that are unionized. (Public-sector employees would still enjoy right-to-work protections due to the US Supreme Court’s ruling in the Janus v. AFSCME case.)

The motivation behind the PRO Act is simple.  OpenSecrets.org says unions poured $27.6 million into Biden’s campaign, and he wants to repay the favor by forcing millions of Americans to pay them dues or agency fees.

Forced union payments is the most obvious cost the PRO Act will have on the middle class, but job loss could be an even greater cost. 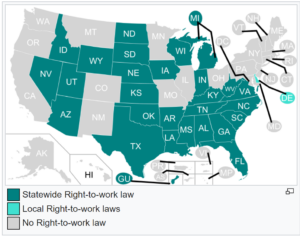 Our colleagues at State Policy Network list 12 ways that the PRO Act will hurt American workers and businesses, including these examples.

— The PRO Act would implement California’s AB5 law nationwide. As a result, tens of millions of independent workers will be at risk of losing their businesses or being forced into untenable work arrangements.

— Franchise owners can’t run their businesses as they see fit. The PRO Act would re-classify many small businesses that franchise or contract with larger companies as “joint-employers,” making both businesses liable for employment decisions of the other.

— The PRO Act would allow unions to strike and picket businesses that aren’t even involved in a labor dispute. Currently, striking is only allowed of businesses that have some involvement with a labor union, but the PRO Act would allow striking of completely neutral parties. For example, if a union is involved in a dispute with an auto manufacturer, it could also strike in front of a parts supplier that provides material to the manufacture, even though the supplier has no involvement with or way to solve the dispute.

The PRO Act would also harm workers’ privacy by giving unions access to their personal information in an electronic, searchable format.  During an organizing election, unions would have access to employees’ personal cell phone numbers and home and email addresses. Employees would not be able to prevent the company from distributing this information.

Manchin supports unions instead of workers

The PRO Act recently picked up an important supporter in Senator Joe Manchin, D-West Virginia). In a speech at the National Press Club, Manchin proudly threw middle-class Americans under the bus.

“Fifty percent of unions fail in their first year of organizing. This legislation will level the playing field, he said.”

Never mind that many of his constituents will lose their right to choose, have to pay hundreds of dollars in union dues against their will, and maybe lose their job.  Like state legislators who say they support education but prioritize school unions over students, Manchin is siding with unions over workers.

Biden’s PRO Act is bad for American workers and employers, and Congress should dump it in the trash.

A version of this column appeared in RealClearPolicy