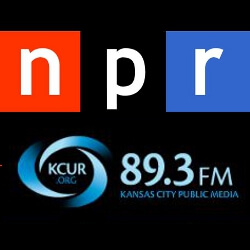 Kansas City public radio station KCUR ran a story recently about a group of Democrats and moderate Republicans developing a new school funding formula, which included a false statement by Senator Laura Kelly (D-Topeka) about school property tax.  Property tax would not increase statewide as stated in the story, but would actually decrease under the plan developed by Senator Steve Abrams (R-Arkansas City) and Rep. Ron Highland (R-Wamego).  We shared the facts with KCUR and they published a follow-up story with some of the information we provided, but they did so in a way that still provided cover to the Senator’s inaccurate statement, made factual errors and substituted their opinion for fact.

Let’s start with the factual errors.  On the net statewide property tax reduction KCUR says, “Trabert’s analysis, according to some legislators, is right.  But he makes some important assumptions.”  The story also contains a table caption that says “A graph from Trabert’s analysis claims (emphasis added) that mill rates would actually decrease for a large majority of school districts under the new formula.”

However, the findings are not the result of my analysis, but of Kansas Legislative Research.  They prepared the analysis for Senator Abrams, which he shared openly.  I forwarded the Senator’s email to reporter Sam Zeff so he could see that it was a government analysis.  Saying that a KPI analysis is right ‘according to some legislators’ is media sleight-of-hand for casting doubt when in fact it’s the government analysis that clearly shows a property tax reduction.

The story is also wrong is saying that I “make some important assumptions” in finding a net property tax reduction: “But what’s important in this discussion is the asterisk at the bottom and phrase “includes implementation of efficiency measures.”  As clearly shown in the table, the asterisk applies to funding increases and 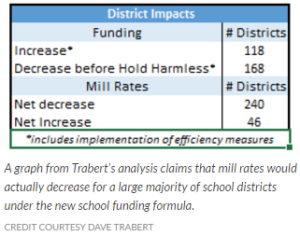 decreases, not mill rates.  The Abrams/Highland plan shows that 118 school districts would have had a net funding increase in 2015 if they had purchased health insurance at better prices and used a portion of their cash reserves (in accordance with the recommendations of an independent efficiency study) and had not lost money on food service and extracurricular activities.  There is no assumption that the residents of 240 districts would see a net mill rate reduction under the Abrams/Highland plan; that is a fact according to Kansas Legislative Research.

They provide cover to Senator Kelly and substitute a special interest opinion for fact with this: “KASB says that if districts want to continue to subsidize food service or pay for things like football and band, they would have to hike property taxes. If school districts just maintained current levies, then overall property taxes would go up for most Kansans, Kelly says.  So, it turns out, everybody can be right on this issue depending on how your cut the numbers.”

That’s a typical false choice put forth by KASB.  Instead of asking citizens to increase taxes, school districts could follow Legislative Post Audit recommendations to reduce food service costs or slightly increase meal prices.  They could also choose to purchase the same quality health insurance and other commodities at better prices.  Further, the Abrams/Highland plan allows districts to implement an extra 2 mills of property tax to cover their extracurricular losses (expenses less fees and gate receipts), and there would still be a $49 million net property tax reduction statewide!

Districts cannot ‘maintain current levies’ under the Abrams/Highland plan as alleged by KASB; they need voter approval to increase levies and spend more.  And let’s not forget that when districts choose to lose money on food service and otherwise operate inefficiently, they are making conscious decisions to divert money from Instruction.

Saying ‘everybody can be right on this issue depending on how your cut the numbers’ ignores the fact that, contrary to Senator Kelly’s claim, property taxes would decline under the Abrams/Highland plan.  There is only one right answer as to whether a bill as written would increase or decrease property taxes; how things might change if school districts took additional action with voter approval is an entirely separate matter.  Media’s job is to report the facts; they shouldn’t provide cover to legislators who make inaccurate statements.