Tax Cuts and the Kansas Economy 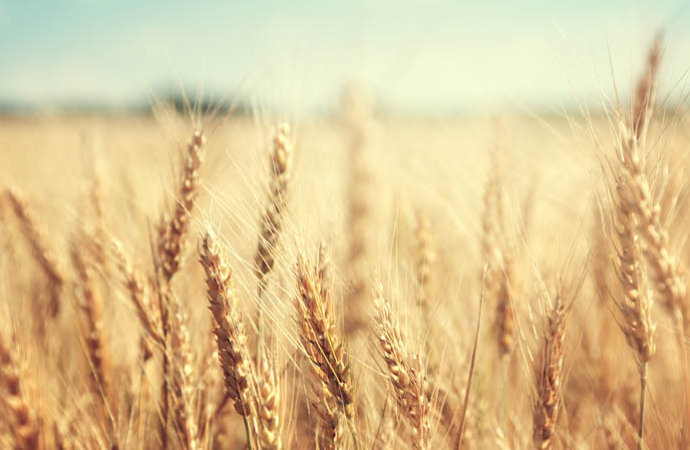 Challenges in the Kansas economy over the last few years have often been blamed on tax cuts, but such simplistic arguments are based on a logical fallacy – ‘A’ happened and ‘B’ happened, so ‘A’ caused ‘B’.  Attempting to ‘connect the dots’ in this manner may seem sensible (or even convenient for those who prefer higher taxes) but most often other circumstances are at play.

Aerospace and aviation are very important to the Kansas economy, with several major manufacturing facilities and related parts suppliers located primarily in Wichita, including Spirit AeroSystems, Cessna, Beechcraft and Bombardier Learjet.   Unfortunately, global economic conditions and workforce relocations created havoc in the industry throughout the Kansas tax cut effort.  Boeing ended its 85-year history in Wichita in the middle of 2014, moving work to Texas, Oklahoma and Washington State.[i]  Between 2012 and 2016, average annual

employment in Aerospace Product and Parts Manufacturing dropped 8 percent[ii] and the loss of those jobs had a negative economic ripple effect, especially in the Wichita area.  The Bureau of Economic Analysis reports Gross Domestic Product for Aerospace Product and Parts Manufacturing in the Other Transportation Equipment Manufacturing category, which accounted for 3.9 percent of the Kansas private sector GDP in 2012 but the national average was only 0.8 percent.[iii]

The Kansas economy is also more dependent on agriculture, where farms accounted for 4.3 percent of private GDP in 2012 versus the national average of 1.1 percent.  Oil and gas extraction and petroleum refining is another outlier for Kansas, at a combined 5 percent of private GDP against a national average of 3.1 percent.  On top of aerospace challenges, commodity prices for key agricultural products and oil dropped precipitously. 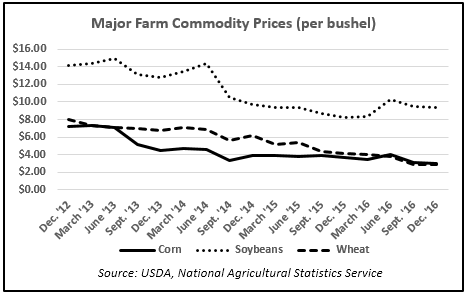 Pass-through income for farms was exempt from income tax between 2013 and 2016 so income tax estimates weren’t affected, but sales tax receipts were hit hard as the cutback on farm spending rippled throughout the economy, as shown on this map of state sales tax collections by county for FY 2016.[vi]  The state sales tax rate increased by 6 percent effective July 1, 2015 so collections should have increased by that amount.  However, 20 western Kansas counties – home to much of the state’s farmland – experienced declines of more than 6 percent and another 13 counties had smaller declines.  Only seven Western Kansas counties experienced real growth in taxable retail sales and use tax activity. 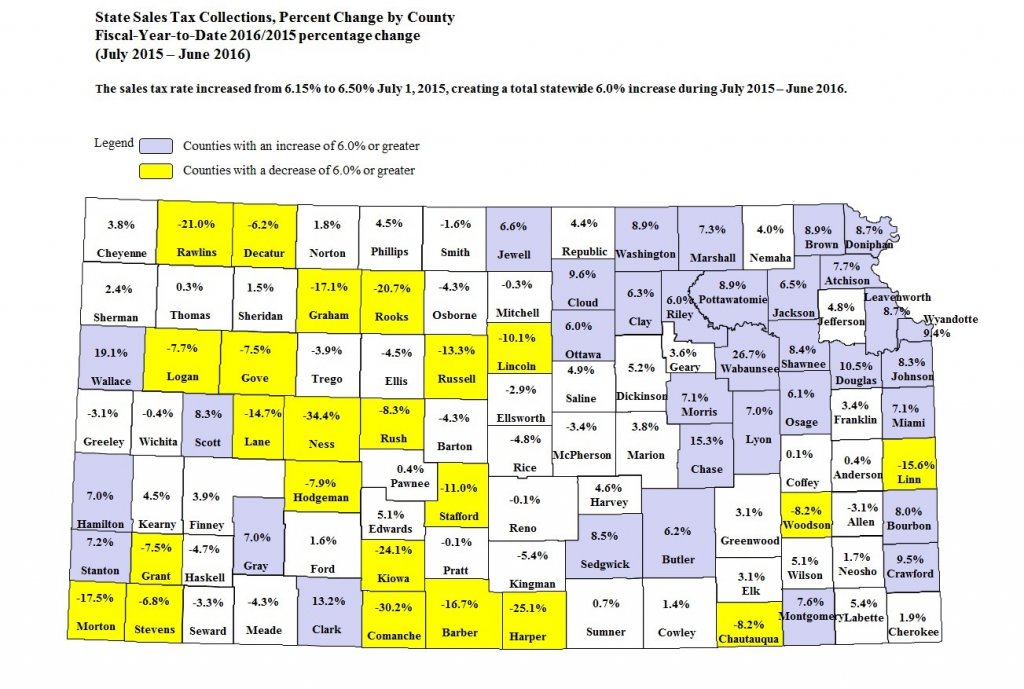 Steep declines in oil prices also hurt much of the agricultural area in Kansas as there is considerable geographic overlap.  The Cushing, Oklahoma crude price hovered around $100 per barrel in late 2013 and early 2014 but fell below $50 by March 2015 and a year later was only at $38.[vii]  Natural gas fell 65 percent between March 2014 and March 2016 before beginning to recover.[viii] 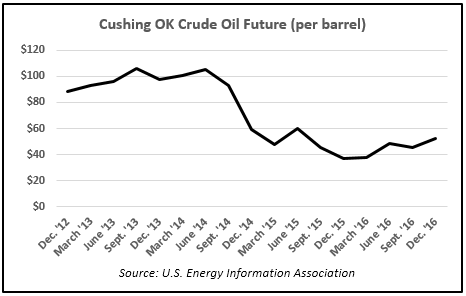 The impact to the Kansas economy was also extensive, as explained in a white paper published by the Kansas Independent Oil & Gas Association (KIOGA).  “To understand this better, let’s look at capital expenditures (capex) which are funds used by companies to maintain or increase the scope of their operations. This kind of spending is very good for an economy. It builds infrastructure, it creates jobs, and is an investment in the future. Companies make these investments because they believe they will get a good return on those investments. Unfortunately, when the price of oil crashes those investments become unprofitable and capex gets cut ($69.2 billion cut nationwide in 2015 and $89.6 billion cut in 2016). Kansas crude oil prices dropped below $20 per barrel in early 2016 as a global glut of production drastically dropped prices. The drop in crude oil prices triggered over 100 oil and gas producer bankruptcies across the nation since the beginning of 2015 that involve over $34.3 billion in cumulative secured and unsecured debt. This is having a profound impact on the oil and gas service sector where we are seeing large job cuts [of approximately] 250,000 direct industry layoffs and about 1 million indirect industry layoffs nationwide.

Allowing citizens to keep more of their hard-earned money over the last few years didn’t cause challenges in the Kansas economy, any more than doing so caused farm commodities and oil prices to decline.