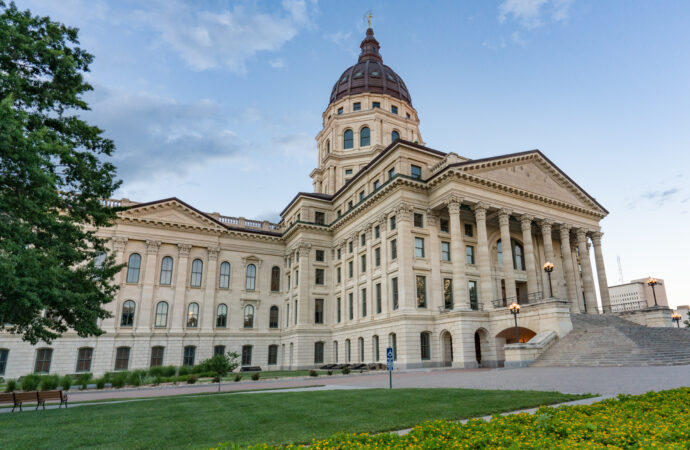 In wake of a massive tax revenue surplus, the state of Kansas should reduce its tax burden. Legislators should consider eliminating unfair taxes on retirees, reforming how state institutions use a property tax allocation to repair their buildings, and other burden-relieving tax options in the FY 2022 session.

In their June 2021 report for FY 2021 tax results, the Kansas Division of the Budget reported an actual collected tax revenue of $8.9 billion, which is $758 million higher than the previous estimates for the same fiscal year. This record-setting revenue supports record-setting spending of $7.865 billion. The actual collected revenue is also a whopping 26.4%, or roughly $1.85 billion higher than it was in FY 2020. While some of this increased number is artificially inflated due to the movement of the tax filing date from April to July, it doesn’t explain a nearly $2 billion increase in revenue: that’s a sign of potential over-taxation during a national pandemic.

One of the areas of concern of the Kansas legislature is dealing with the $1.9 billion in reserves that are currently sitting and waiting to be spent…or not. If this money isn’t being used for anything and isn’t going to be used to fund the state, it should go back to the individuals and communities it was collected from. Spending an additional $1.9 billion sets a dangerous precedent for increasing the budget: no government likes to reduce its spending, even after spending a one-time reserve.

Instead, providing tax relief with the surplus by eliminating the income tax on retirement income, property tax reform, and cutting the sales tax on food are three good reforms to consider.

In December of last year, Kansas was ranked as the fourth least tax-friendly state for retirees across the entire country by Kiplinger.  It’s not a surprise why: private retirement plans such as IRAs and 401ks, Social Security benefits for people with a federal adjusted gross income exceeding $75,000, and out-of-state public pensions are all fully taxed. Other issues Kiplinger mentioned are the ninth-highest combined state and local sales tax as well as higher than average property taxes. The estimated costs of exempting some of these taxes can be found below. The table demonstrates the budget shortfalls over the next three years. With just this year’s surplus, the state of Kansas would already have almost three times the amount needed to offset the elimination of these taxes for the first three years.

Kansas should eliminate these taxes on retirees to create a fairer tax environment. This is especially true when public sector pensions are not taxed. A move like this would make the state more livable and would keep retirees here instead of moving elsewhere. Eliminating, or reducing, these taxes is a politically viable move and could reinforce the state’s commitment to its elderly population. With the current budget surplus, the state would have time to adjust its spending plans to prevent a deficit.

For the sake of efficiency and transparency, this budget surplus gives legislators an opportunity to re-organize eliminate 1.5 mills of property tax that is transferred to two state-building funds, saving taxpayers about $60 million annually.

One mill from the statewide property tax goes to the Kansas Board of Reagents to repair buildings, while the other .5 exists for statewide (non-education) building projects. This direct transfer of funds does not go through the regular appropriations process and is clunky.

Kansas has one of the highest combined state and local sales tax rates on food in the nation, exceeding 10% in some areas. For every one point reduction in the state sales tax rate of 6.5%, Kansans would save close to $70 million annually, according to 2019 state estimates.

Though everyone pays the sales tax, it is overwhelmingly regressive and affects lower and middle-income families significantly more than it does higher-income buyers. Decreasing the sales tax would help lower the costs for many families trying to make it through the COVID-19 pandemic and the current economic downturn. Specifically, targeting lowering the sales tax on vital items like groceries would have considerable societal benefits.

Other potential ideas for tax reforms include a ratcheting system towards marginal income rates in which excess collected revenue is used as a justification for lowering taxes in subsequent fiscal years as well as creating spending and revenue limits through tax and expenditure limits.

Fiscal responsibility isn’t a partisan matter: it’s Kansas’ obligation to the taxpayers who support our state. With a surplus available in the state budget, the Kansas legislature can enact the above budgeting and spending reforms to create more stability in the future. Legislators control the purse strings and time will tell if they can make the most of this opportunity.