3 things to know about Truth in Taxation 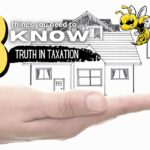 The new Truth in Taxation legislation is now in effect, and there are three things that taxpayers should know about the process to maximize the benefits and reduce taxes.

1.  Local officials can reduce taxes or hold them flat if they wish.  As of August 24, almost 250 cities, counties, and school districts

Transparency – being forced to vote on the entire property tax increase they impose – provides a great incentive to sharpen their pencils and make better use of your money.

2.  Hold local officials accountable to the law.  The revenue-neutral/Truth in Taxation law says any taxing authority that doe not follow the process may not collect more property tax than the year before.  If they do, there is a process for them to issue refunds.

Each taxing authority is required to publish a notice of the revenue-neutral rate hearing at least 10 days in advance in the newspaper and on their website.  Taxpayers should ask officials to produce documentation that they have done so and be sure both notices were published far enough in advance.  If not, you may be able to prevent them from increasing property tax.

Be respectful, but ask for direct answers to questions like, “How much property tax are you collecting this year, and how much is in your budget for next year?”  Let’s say a county collects $10 million this year, and they budget $11 million next year…that is a 1o% increase!

Here is another one: “Can you show an analysis that says the county (for example) is operating as efficiently as possible?  You need to find ways to operate more efficiently and reduce our taxes.”

Kansas Policy Institute examined 2018 spending for all counties and found very large variances in the amount spent per resident.  The per-resident spending among the counties with populations between 10,000 and 30,000 ranged from as little as $589 per resident in Labette County to as much as $1,396 in Franklin County.  Taxpayers in Franklin County may ask commissioners whether they are getting more than twice as much service as Labette County residents, or if Franklin County just spends a lot more.

Taxpayers should also remind local officials that they and their predecessors imposed very large property taxes over the years.

Overall, property tax has increased by 167% since 1997; that is more than three times the inflation rate.  Property tax for education (including community colleges) increased by 148% and other local government entities collectively hiked taxes by 187%

Taxpayers can see how much their county tax increased here, and the increases for the largest cities in Kansas can be found here.