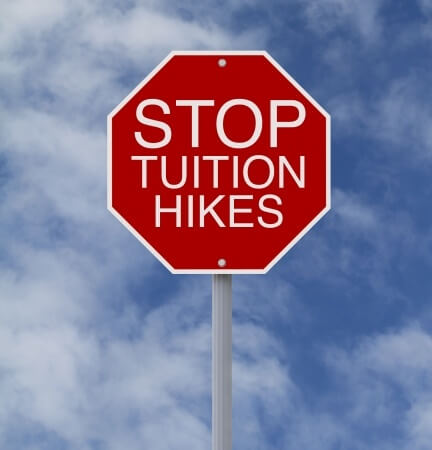 Kansas universities are proposing more tuition hikes and placing the blame on what they describe as “budget cuts” for the upcoming fiscal year.  But as is often the case in government, “budget cuts” means getting a smaller increase than desired rather than getting less than the previous year – and that’s the case with 4 of the 6 Kansas universities.

The Kansas Division of Budget shows 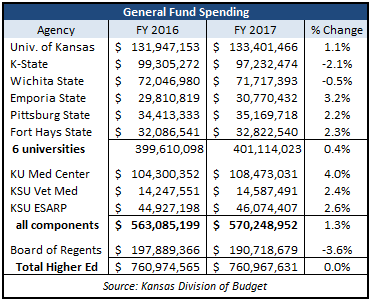 revised funding (after the Governor’s allotments) for the six universities is budgeted to increase by $1.5 million (0.4 percent) and including other university components, total university funding would increase $7.2 million (1.3 percent) over estimated actual funding for the current year.  Wichita State and Kansas State University show small declines but the other universities are budgeted to receive more money.  Funding for the Board of Regents is estimated to decline by $7.2 million, leaving higher education funding flat overall.

The original budgeted funding for FY 2016 was higher but was later reduced; universities may be reporting reductions from the original state budget for FY 2017 rather than compare to funding actually received for the current year.  Their collective hope to spend even more next year is being reduced, but not the collective funding that the six universities and their components actually received this year.

A small funding increase isn’t the only reason that tuition hikes aren’t necessary.

Tuition is deposited in universities’ General Fees Funds, which operate like your checkbook; the balance only increases when more money is deposited than spent.  Universities began the 2004 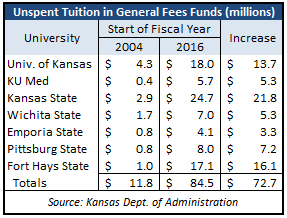 fiscal year with $11.8 million in those funds but the balances increased to $85.1 million at the beginning of the current year.  The increases in those balances represent $73.3 million in tuition that was collected over the years but not spent.

Confronted with these inconvenient facts in the past, universities (and K-12 school districts) have offered numerous excuses to justify large cash balances but their own operating history refutes each attempt.  Universities aren’t hesitant to say they want more money, yet there is no legislative record of them saying they lacked sufficient cash reserves.   Also, cash reserve balances have grown rather steadily over the years; this isn’t a matter of a recent surge that could be explained away as an anomaly (or to be specific, seven identically-timed anomalies).

Raising prices to be competitive?

When asked a few years ago why tuition increased so dramatically beginning in 2004, it was explained that double-digit tuition hikes were needed to be more competitive with universities in other states that charged higher tuition.  Yes, you read that accurately.  There wasn’t a need to charge students more…they just felt they wouldn’t lose market share because tuition was more expensive in other states.  So Kansans literally paid the price. 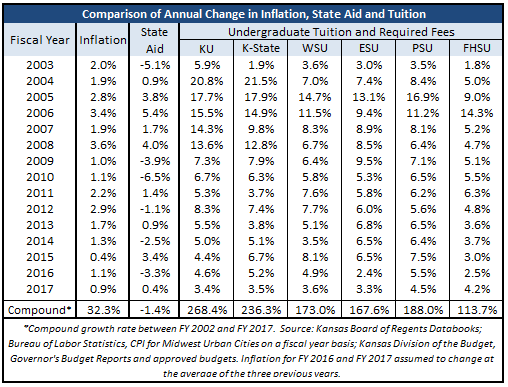 Tuition increases since have been smaller but the compound impact on students and parents has been crushing.  Since state aid has not kept up with inflation, one could understand tuition increasing by 65 percent over the last 15 years (inflation of 32 percent and another 33 percent for the difference between inflation and state aid change) but every university went much farther.[ii] 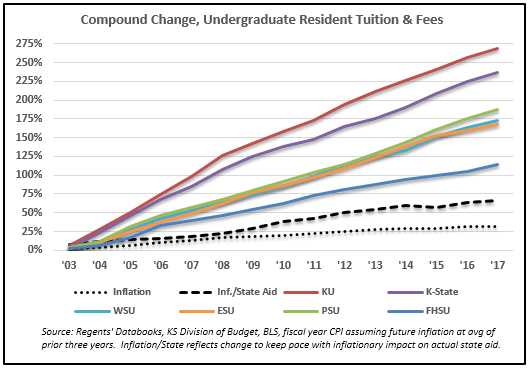 Use cash or cut costs, but don’t increase tuition

The Board of Regents should deny tuition hikes and direct universities to use their cash reserves or operate more efficiently.  Here’s the proof it can be done by using unspent tuition dollars, even if universities proposed an unnecessary 4 percent tuition hike. 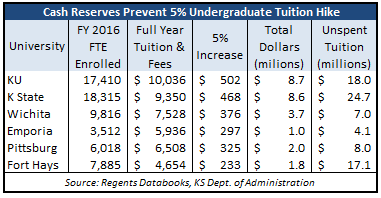 is less than the amount of unspent tuition every university had at the beginning of this year.  No university could say that doing so wouldn’t leave them with enough cash, as each would still have more than they had in 2004 – and didn’t complain that they had insufficient cash.   This is not to suggest that a 5 percent increase is in anyway justified; inflation is quite low and some universities are actually getting a small increase in state aid next year.  The point is only that each began this year with more than enough unspent tuition cash to avoid at least a 5 percent increase.

And does anyone believe universities makes efficient use of taxpayer and tuition dollars?  The management structure alone is mind-boggling, with a myriad of vice, assistant and associate provosts, deans and directors.  Check out university payroll listings at KansasOpenGov.

Forcing people to pay higher taxes and tuition is the go-to government reaction.  It’s time they starting looking within for solutions.

[i] Tuition and fees in Regents Databooks are based on an Academic Year, which starts in the Fall, whereas fiscal years are referenced to the year in which they end. Accordingly, university tuition for AY 2016 (for example) is the same as FY 2017.

[ii] This calculation applies the change in state aid equally to each university. Actual state aid change over the last 15 years are: University of Kansas -3.5%, K-State -9.1%, Wichita State +9.2%, Emporia +0.9%, Pittsburg +5.2%, Fort Hays +3.1%. Still, every university increased tuition far more than inflation and adjustment for their individual change in state aid.