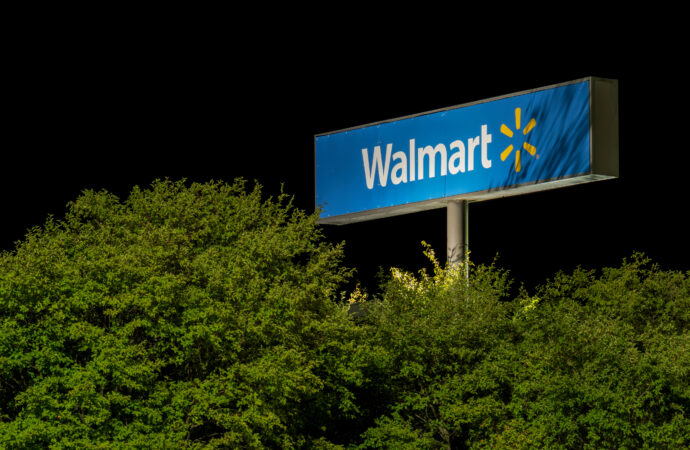 Earlier this year, the Kansas Supreme Court sent a 2019 Board of Tax Appeals (BOTA) decision back to BOTA, saying they should have reached their decision without considering the Court of Appeals in Prieb. The Supreme Court didn’t determine whether BOTA’s decision on the appraisal methodology is right or wrong, just that BOTA must reconsider the case without relying on Prieb. BOTA ruled several times that Johnson County had overtaxed so-called “big box” retailers like Walmart and Sam’s Club properties. While this legal issue is part of the unsettled debate on the “dark store theory,” the decision has serious repercussions for business and home property taxes across the state.

The case began when the State Board of Tax Appeals found that Johnson County overvalued Walmart’s and Sam’s Club property by $63 million in 2016 and $60 million in 2017. The 2019 decision found that the appraisal method for Walmart’s properties included the intangible values attributable to a lease in place and business value.

What if Johnson County prevails?

“Dark Store Theory” is a phrase coined by government officials, referring to setting commercial property values based on the building and land. Ironically, that’s the way big-box retailers have been valued all along. Now the county also wants to tax intangible value attributable to a lease in place and business value. In other words, Johnson County officials applied an ominous-sounding label to generally accepted appraisal practices to provide cover for what they were doing. JoCo is essentially saying that the physical building of a Walmart store is of higher value than some other “big box” store because of the tenant, even if the building itself is exactly the same and the tenant could shift from one year to the next. They want residents to believe retailers are asking for special treatment with “tax reductions;” in reality, those retailers are trying to hold county appraisers to existing law and appealing what they believe to be large, improper tax increases. 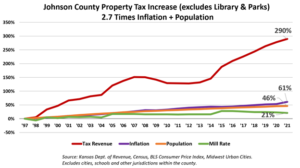 Johnson County officials are telling homeowners that their property taxes could jump if the county loses its appeal, but that is misleading on at least two fronts. First, their claim is based on not getting to keep money that BOTA has said they improperly took.  Second, taxes paid by big box retailers have increased, just not as much as the County wants.  Johnson County commissioners have hiked property tax by 290% since 1997, which is far more than is necessary to account for inflation and population growth.  Commissioners could be looking for ways to reduce taxes and spend more efficiently.

Other types of businesses would see large tax increases, also. County Commission Chair Ed Eilert has warned homeowners that their taxes will go up if the county loses, which would extend to all types of property because the same mill levy applies to all property.

If Johnson County is able to keep valuations high, that opens the door for more taxes in the future. The methodology for the increased valuations on Wal-Mart isn’t codified in law, so giving a green light for greater decision-making power outside of direct public involvement brings up transparency and equity issues. Higher valuations for businesses in a neighborhood could lead to valuations in nearby homes increasing as well. In the end, consumers are the ones who pay higher business taxes through higher prices. Then, with a crowded metro area spanning a state line, people will adjust their decisions differently: shoppers may go to Missouri to save a few dollars, or bigger stores may start popping up right across the border instead of in Johnson County.

Kansas already has some of the highest effective tax rates in the nation on commercial property. Further increasing property tax on businesses could cause some to close, and the county likely would again raise taxes to offset the losses.  In a 2018 legislative hearing on this topic, a partner in the investment firm that owns the Overland Park Marriott said the Johnson County Appraiser’s Office is the biggest threat to the hotel’s solvency.