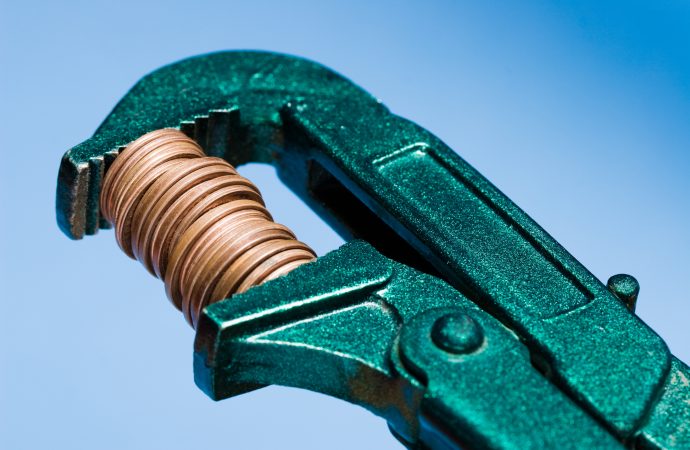 Mega-subsidies, property tax increases, and uncompetitive economics, oh my! From the local to the state level, legislators have the opportunity everywhere from government budgets to the next legislative session to make Kansas a more affordable and economically competitive state for families.

Cities, counties, school districts, and various other government budgets across Kansas are awash in cash. Approximately $3.3 billion from ARPA – the second federal COVID-19 relief package passed in 2021 – is hitting state budgets for the FY 2023 year. Despite warnings of “unprecedented revenue collapse” in April 2020, cumulative county and city sales tax collections in 2020 didn’t decrease during the pandemic but instead were 0.1% greater than 2019 collections. By 2021, these same cumulative sales tax collections were 10% greater than in 2020. While every city and county’s experience is different, the trend here is that local governments are awash in cash and should return it to taxpayers.

Wasteful spending is already happening. Of Overland Park’s, $9.2 million received from ARPA, 49% of that is going to “infrastructure projects” like $1.85 million for new LED lights for a soccer complex. Sedgwick County is spending a whopping $5.4 million of ARPA funds on new cameras and locks for prison cells. Though the ARPA allocation process is close to done for many cities and counties, policymakers should consider tax cuts and less spending if ARPA is used to fund these “needs.”

Property tax season is upon us as well. 2021’s Truth in Taxation legislation required local taxing entities to hold public hearings and vote on tax increases. After the legislation’s passing, 50% of local taxing authorities didn’t increase property tax revenues. To stay at the same dollar amount of property tax, mill rates need to be reduced to account for new valuations.

As told in KPI’s Green Book, counties across Kansas saw a 188% increase in property tax between 1997 and 2021 while the statewide population only grew by 11% and inflation was 61%. Overland Park, for instance, had a 320% increase in property tax collections, significantly higher than its hypothetical growth with Overland Park’s population growth and inflation. 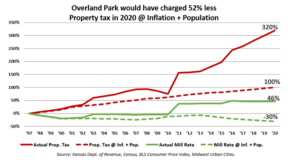 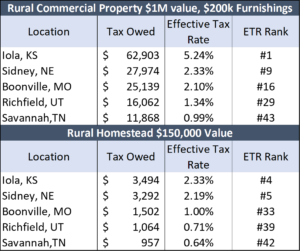 Property taxes are especially concerning in rural Kansas, where commercial properties in a town the size of Iola have the highest property tax compared to similarly sized towns across the country. Industrial properties and homesteads have some of the highest rates in the nation.

The amount that government budgets choose to spend is the only determinant of the amount it taxes. Local governments have to provide the same basic services like education, infrastructure, public safety, etc., but some do it much more effectively. KPI’s 2020 review of Kansas county per-resident spending showed thousand-dollar differences between how counties spend. For instance, counties with populations between 6,000 and 10,000 people differed in their per-resident spending from a high of $3,038.58 to a low of $949.97. 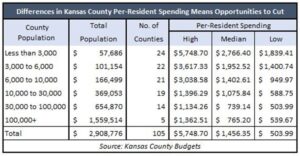 The key to budgeting is continually removing wasted costs while providing the same services. Finding small amounts to save in the budget adds up quickly. And, can result in real savings for taxpayers. Performance-based budgeting and constant review of regulations and their enforcement which can drive up prices are two ways by which governments can analyze and reduce their costs, opening the way for competitive tax reform.

In mid-2020, the Kansas government predicted that the state would have a $2.1 billion shortfall in July 2023; according to updated estimates, that number is an expected $3.1 billion surplus by the end of FY 2023, at the end of June 2023. This trend has been seen in different states’ government budgets nationwide: state tax revenue on average increased by 12.1% instead of dropping by 50%. Alongside $1.6 billion in aforementioned federal COVID bailouts on top of this high revenue, the Kansas state government is awash in taxpayer cash.

This money should be spent wisely: eliminating debt and one-time expenditures to reduce future costs should be the extent of new spending. Then, the money should be returned to the taxpayers who know how to spend it best for themselves. $829 million in subsidies obligated to Panasonic for a new battery plant in De Soto has already taken a giant slice out of taxpayer relief – and worse yet, on subsidies that historically haven’t brought meaningful economic growth in the state.

The end result of reducing taxes is making Kansas more economically competitive and a place where more families and businesses want to plant their roots – the tough part is a commitment to a balanced budget. Eliminating Kansas’s retirement tax and special exemptions to sales taxes, reducing rates on income taxes, and addressing Kansas’s highest tax rates on mature businesses could all help stimulate growth.

Government must reduce spending by finding ways to operate more efficiently. While states that tax income provide the same public services as states that don’t, incoming taxing states like Kansas spent 52% more per resident in 2020 compared to states that don’t tax income. Kansas has 6 times the number of cities, counties, and townships per capita than the national average and has the 2nd lowest rate of government employees per capita nationwide. Not filling positions after employees naturally leave and continually evaluating the size of government are ways to start saving money.

Mitch Daniels, the former Governor of Indiana and current President of Purdue University, compared budgeting to approaching a marbled steak: there’s fat everywhere inside it, and any trimming of it makes a difference. As a result of this philosophy, under Daniels’s leadership, Purdue has maintained an 11-year freeze on tuition, making education more affordable to thousands of families. A similar approach in budgets across Kansas would save taxpayers millions over time and help keep families in the Sunflower State.