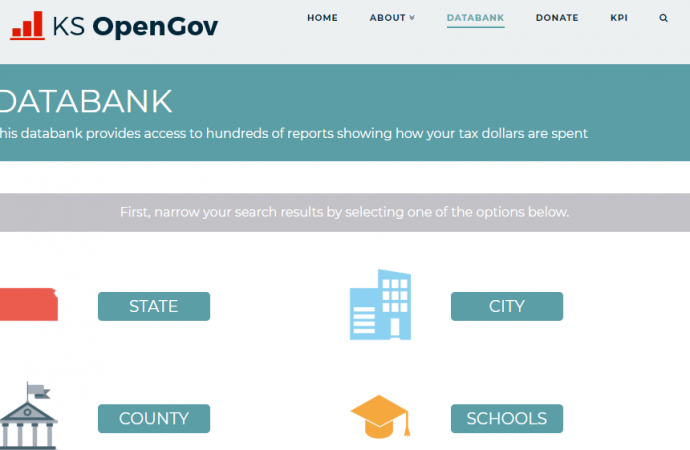 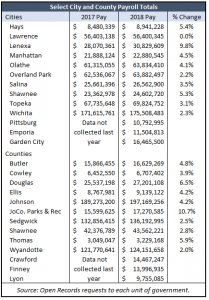 Kansas Policy Institute collects the data annually in Open Records requests and publishes the results online.  Employee payroll listings for each city can be found here and county payroll listings are here.  Government is allowed to charge a fee to provide this public data so we started with governments in the more populous counties and add a few more city and county payrolls each year.

Of the cities examined, Lenexa had the largest increase at 9.8 percent, followed by Hays (5.4 percent) and Shawnee (5.3 percent).

Douglas County had the largest increase among counties examined, with a 6.5 percent total pay hike.  Thomas County had the next highest increase (5.9 percent) followed by Butler County (4.8 percent) and Johnson County (4.7 percent).  Johnson County’s increase is a combination of Parks & Recreation (which for some reason is reported separately) with a 10.7 percent hike and all other county payroll increasing 4.2 percent.

Local government can give increases and add staff because cities and counties continue to increase property taxes far in excess of inflation.  Charts showing a 20-year trend in tax hikes for all 105 counties can be found here and charts for 38 of the state’s largest cities are here. 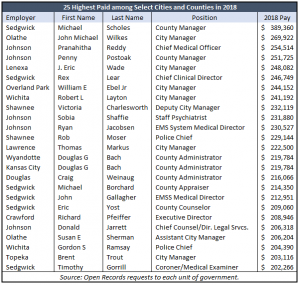