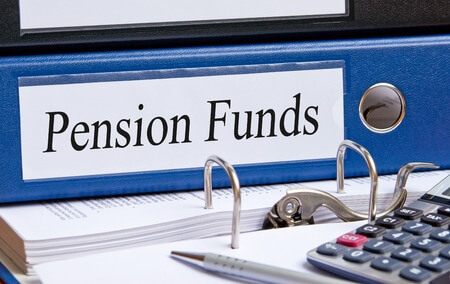 An Open Records request fulfilled by the Kansas Public Employees Retirement System (KPERS) shows record-setting payouts in 2016 of $1.6 billion.   The number of KPERS ‘millionaires’ also set a new record, with 2,007 government retirees expected to receive more than $1 million in pension benefits over their first 20 years of retirement.  Pensions are paid over the lifespan of each retiree, so actual payouts could be more or less.

The KPERS system covers employees of state government, local government, school districts, and even some employees of private entities associated with government.  Some university employees participate in KPERS but most of them are covered by a separate system.  KPERS retirees have the option of taking a lump sum distribution upon retirement with reduced monthly benefits thereafter or they can collect their pension in regular monthly installments.  KPERS retirees who reside in Kansas also receive preferential tax treatment.  Their personal contributions are subject to state income tax when made but their withdrawals are exempt from state income tax, which means government retirees never pay state income tax on most of their pension benefits that come from employer contributions and earnings on all contributions.

The twenty largest distributions are driven by those who elect lump sum distributions.  State law prohibits KPERS from releasing retiree names but the two at the top of the list are likely school superintendents; Marlin Berry of Olathe and Julie Ford of Topeka.  See the complete list here. 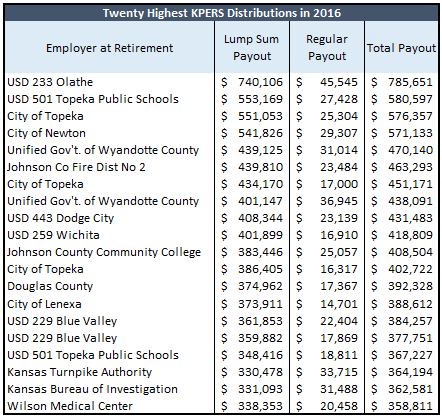 Educators also dominate the twenty highest ‘millionaires’ list.  School superintendents likely hold the top five positions, with Blue Valley’s Tom Trigg expected to collect over $4 million in payouts during his first twenty years of retirement.  Trigg is one of many retirees who collect their pensions while still working elsewhere.  His annual pension of $214,258 was boosted by as much as $40,000 because he received over $300,000 in deferred compensation in his last year of employment, which pumped up his final average earnings.  Local school boards cut these deals but citizens across the state have to pay the excess KPERS costs. 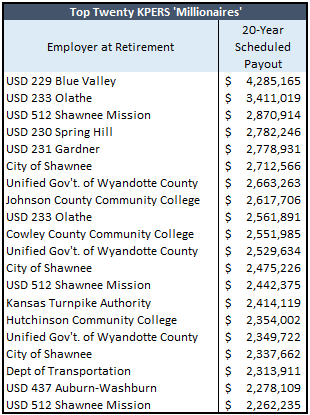 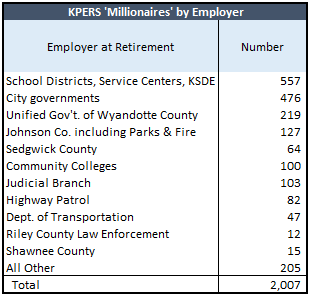 With the caveat that retirees may not have spent their entire time at the employer from which they retired, there are nine school district employees in the top twenty and three people from community colleges.  The City of Shawnee oddly has three members of the top twenty, as does the Unified Government of Wyandotte County.

Educators also comprise the largest portion of the full list of ‘millionaires.’ School districts, education service centers and the Kansas Department of Education (KSDE) collectively have 527, or 26 percent of the total; counting community colleges, education accounts for a third of all ‘millionaires.’

City governments comprise the next largest group, with 24 percent of the total.  The Unified Government of Wyandotte County, which includes the city of Kansas City, Kansas, has a little over 10 percent of the ‘millionaires.’

And given media coverage over pay levels in the courts and Highway Patrol, citizens may be surprised to learn that they collectively have 185 pension ‘millionaires.’

The complete list of KPERS ‘millionaires’ can be found here.