Legislature moves away from freedom in 2017 session 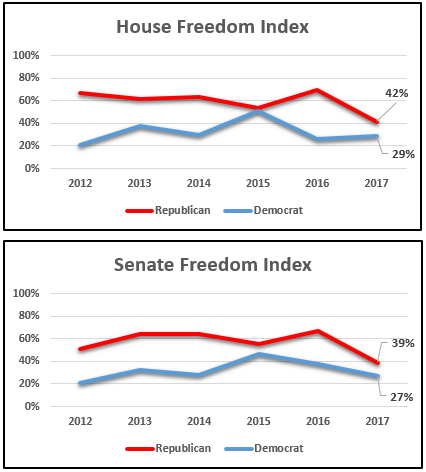 The 2017 legislative session was noteworthy both for its length and for the relative opposition to economic and educational freedom in the 2017 session, according to KPI’s annual Kansas Freedom Index. Taken as a whole, the legislature moved away from freedom and the principles of liberty in the just-completed session when compared to returns since 2012, when KPI first published the Freedom Index.

Republicans in the House and 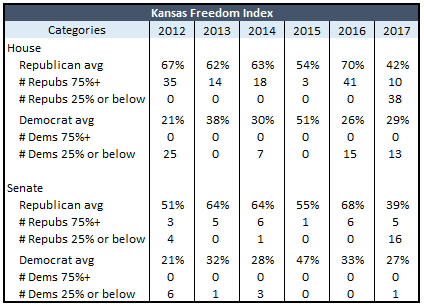 Senate had their lowest scores since 2012, with each chamber falling below 50 percent and collectively considered as opposed to freedom issues; 50 percent is considered ‘neutral’ on the Index.

Democrats in the House moved up a little from 26 percent to 29 percent but Senate Democrats dropped from 33 percent to 27 percent.

Just as in years past, political party seemingly has nothing to do with votes on freedom-related issues. In fact, in both the House and Senate the highest and lowest scores are held by Republicans. This also isn’t a product of outliers on either end. Indeed, the 12 lowest scores in House and 14 lowest in the Senate are all Republicans. Across both chambers 47 Republicans were above 50% and 70 Republicans were below 50%; 50% effectively being “neutral” on issues of economic and educational freedom. Only one Democrat was above 50% and one legislator hit the nail on the head at 50% exactly. 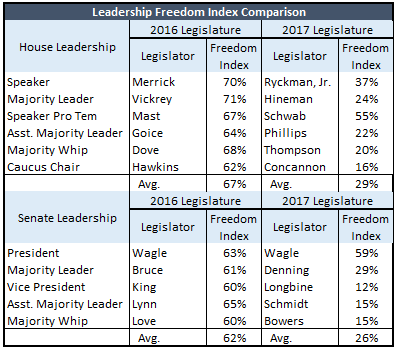 There was also a pronounced movement away from freedom among leadership in both chambers. The Freedom Index for House leadership fell from 67 percent last year to 29 percent this year; Senate leadership dropped from 62 percent to 26 percent.

This guide is a one-stop shop for the impact that legislative votes have on your ability to run your business, live your life, and raise your family as you see fit. It is the product of nonpartisan analysis, study, and research and is not intended to directly or indirectly endorse or oppose any candidate for public office.

You might hear certain legislation was passed or voted down, but it is often difficult to know whether your legislator voted in accordance with the promises made on your doorstep. The KFI seeks to fill some of those gaps by capturing the economic and educational freedom votes in the legislative session. Again this year we include a “Lifetime Score” for those legislators who have served in Topeka for at least two sessions since 2012, they needn’t be consecutive or in the same chamber.

As the team reviews the scores each year is it stark reminder of how our federal system of government has been flipped on its head. Maybe it is the wall-to-wall coverage of President Trump or that I am still getting over the firework-induced patriotic fervor of Independence Day but it seems we’re spending an increasing amount of energy on the goings-on in Washington. This is at the expense of what happens in our state and local government. It was the hope of our nation’s founders and early leaders that local and state government would be where the action was, so to speak. DC would be relatively distant and have less impact on our daily lives. That clearly isn’t the case. More-troubling, perhaps, is that it hasn’t been for a long time.

What that means for the Kansas Freedom Index is that we’re trying to help shine light directly where there is a dearth of the same. Facebook feeds, the Twitter monster, nightly screaming matches on cable news, and the dinosaurs of print media are filled with DC-based coverage but where is the focus on Topeka? The KFI aims to redirect a bit of this focus and helps demonstrate if Topeka is moving towards or away from freedom.

You can view the final 2017 Freedom Index and read the Methodology here and a PDF version will be available for download shortly. E-mail or give us a call with any questions or to request that we drop a printed version in mail. Taken as a whole, the KFI can help Kansans achieve a better understanding of how much folks in Topeka trust you to make the economic and educational decisions for yourself. It is the product of nonpartisan analysis, study, and research and is not intended to directly or indirectly endorse or oppose any candidate for public office.