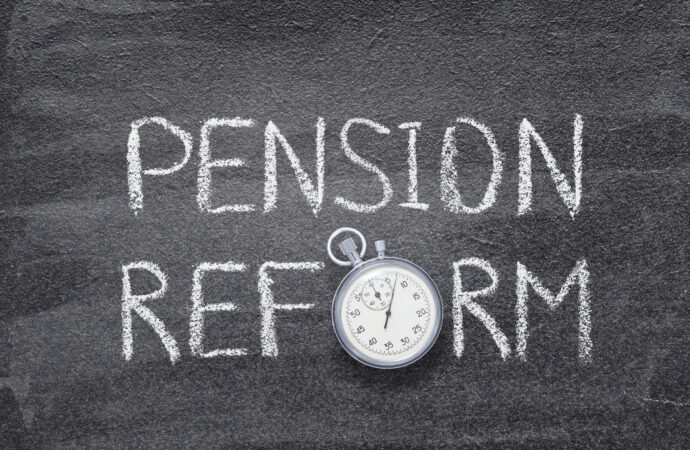 Information provided by the Kansas Public Employees Retirement System (KPERS) shows school officials top the list of KPERS ‘millionaires’ — people who will collect at least $1 million in pension benefits during their first 20 years of retirement.  But while government retirees are collecting generous pensions at taxpayers’ expense, the system’s unfunded liabilities are nearly $38 billion according to a 50-state analysis published by the American Legislative Exchange Council (ALEC). 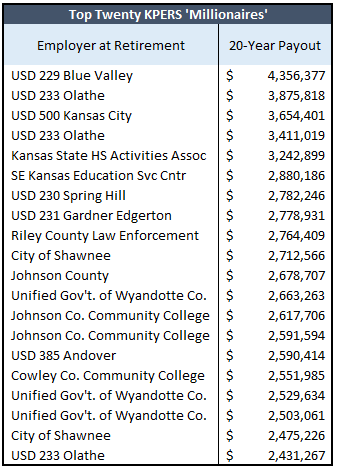 Ten of the top 20 KPERS ‘millionaires’ worked in the K-12 education system; eight at local districts, one from the Kansas High School Activities Association, and one from the Southeast Kansas Education Service Center.  State law prohibits the release of retiree names, but the school district retirees are likely former superintendents.

It’s probably former Blue Valley superintendent Tom Trigg collecting the largest payout in Kansas; an annual pension of $217,819 will deliver $4,356,377 in pension payments over his first 20 years of retirement.  Trigg left Blue Valley in 2015 to become superintendent of Highland Park Independent School System in the Dallas area at an annual salary of $325,000 plus $13,800 in car and technology allowances, and a $1.2 million interest-free loan to buy a house.

Marlin Berry, former Olathe superintendent, is probably #2 on the KPERS ‘millionaires’ list, at $3,875,818.  A new entry to the list this year, collecting the third-highest payout of $3,654,401, is likely former USD 500 Kansas City superintendent Cynthia Lane, who presided over one of the worst-performing districts in the state.

There are now 2,706 KPERS ‘millionaires’ collecting more than $1 million in pension benefits over their first 20 years of retirement, an increase of 184 over last year.

The 20 highest regular payouts and the 20 highest total payouts (regular plus one-time payments in exchange for reduced monthly payments) are listed in the table below. 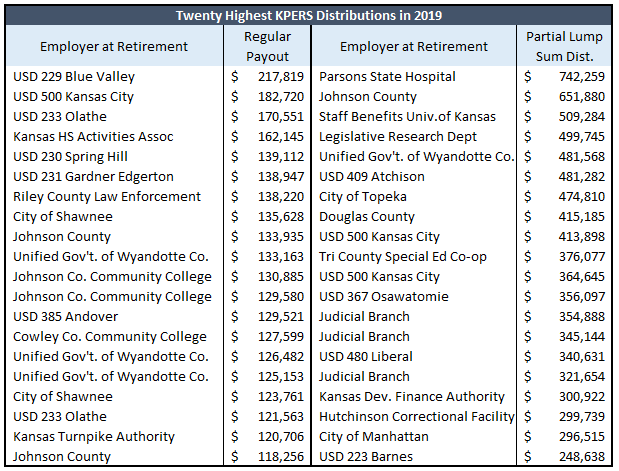 Officially, KPERS is ‘only’ $9.2 billion underfunded, which is the gap between the actuarial value of assets and the actuarial liability for services already earned by public employees.   The most recent annual report puts the funded ratio at 68%; that’s the ratio of assets to future liabilities.  The report says, ” funding over 80 percent and rising is generally good. Funding below 60 percent is poor and needs prompt attention.”

But the funding ratio and estimated unfunded liabilities are based on an overly optimistic 7.75% annual rate of return.

Reamortizing would cost more than $4 billion

Governor Laura Kelly’s plan to reamortize pension liabilities by taking longer to pay off the official $9 billion indebtedness would have cost taxpayers  $4.4 billion more, according to KPERS.  Her plan, rejected by legislators, was designed to reduce KPERS payments now to plug large budget deficits caused by excessive school funding.

With next year’s deficit ballooning to as much as $1 billion next year following the governor’s statewide COVID shutdown, she’ll likely propose her reamoritzation plan again next year.

Payments to KPERS ‘millionaires’ and other retirees could be in jeopardy if legislators continue underfunding the plan (every year since the early 1990s) and don’t enact further pension reforms.