Kansas has some of the nation’s highest property tax rates 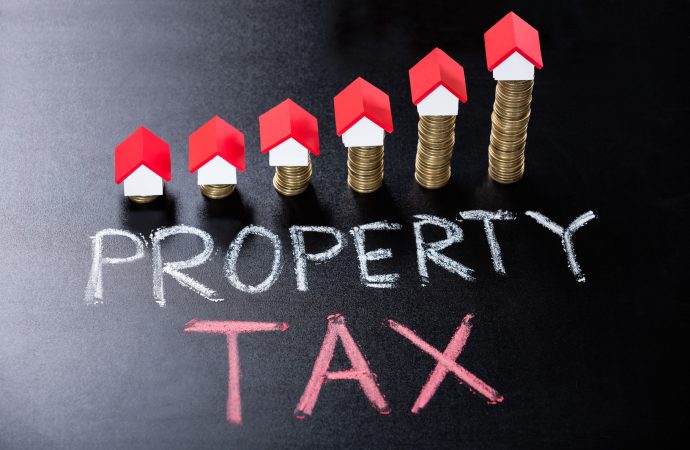 Our 2021 Green Book shows once again that Kansas has some of the highest property tax rates in the nation.

Iola has the dubious distinction of having the highest effective tax rate on commercial property for rural areas in the nation.  A property 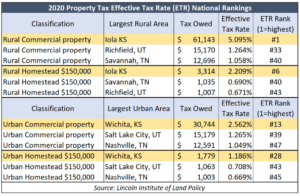 The analysis by the Lincoln Institute of Land Policy defines a rural area as a non-metro county with population between 2,500 and 10,000.  Iola is largest county seat in Kansas fitting that definition.

The owner of a $150,000 home in Iola pays over $3,300 in property tax, or three times as much as the owner of the same house in Richfield, Utah.  That is the sixth-highest ETR in the nation.

Comparing the largest cities in each state, Wichita has the 13th-highest ETR on commercial property and the nearly $31,000 in property tax is more than twice the cost of the same property in Salt Lake City, Utah.  The tax on a $150,000 home in Wichita is 70% higher than in Salt Lake City, with an effective tax rate ranked #28. 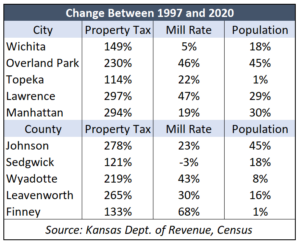 The Green Book also provides comparisons of changes in property tax, mill rates, and population for each county and the largest cities in Kansas.

The average property tax increase is 180% across all counties between 1997 and 2020, and it is 167% for the largest cities.  There was 11% population growth in Kansas over that period, and inflation rose by 53%.

Comparisons for all counties and the large cities can be found on KansasOpenGov.org.