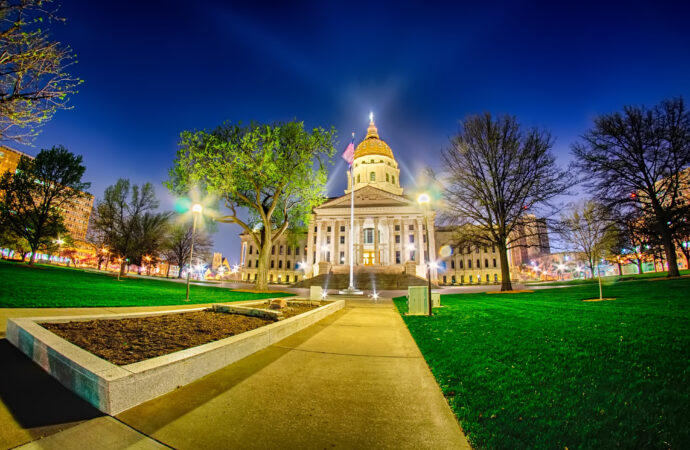 Most Kansans have probably heard claims recently about the state’s “booming” economy. Aside from the false claims that massive government mega-subsidies equal economic growth (they don’t) or that the state’s job market is thriving (Kansas is now in a minority of states that haven’t recovered their pre-pandemic jobs), it’s easy to look at Kansas continually exceeding tax revenue expectations and the massive surplus of taxpayer cash and think the economy is booming. However, the historical inaccuracy of these revenue estimates undermines the arguments.

The Kansas Legislative Research Department and Division of the Budget create revenue estimates for future fiscal years’ end collections in April and November of each year. Between FYs 2002 and 2019, the first predictions for a fiscal year’s income tax collections made 20 months before its end varied, either positively or negatively, from the actual haul by an average of 13%. Just three months before the end of the fiscal year and the predictions for income tax were still off by 4.7% on average, again either way. That may not sound like a lot, but an average of 4.7% off is equivalent to $128 million off each year. Since these estimates are the basis for proposed and enacted budgets each year, that 4%+ variance means the legislature is spending money based on little more than a wing and prayer.

This issue of poor estimates isn’t new though. Overestimations of GDP and personal income growth by the Consensus Revenue Estimating Group in the mid-2010s lead to higher revenue anticipations which in turned lead to high spending. Between 2013 and 2016, the estimates varied from the actual collections by an average of 4.9% when they were only three months away from knowing the total.

The recent variation from estimates is in part due to misbelief about how the COVID-19 pandemic would affect state economies. Many feared an “unprecedented revenue collapse” that, thankfully, never came. But, this belief was reflected in estimates that consistently lowballed actual tax revenues during the pandemic – total taxes in FY 2021, including the height of pandemic lockdowns, were 14.8% higher than estimates.

Another factor is inflation: underestimation of income taxes isn’t because business is booming in Kansas, but because there is a factor of artificial wage growth that is driving up incomes and thus taxes.

The contrary is true: there are signs in the revenue reports of coming economic trouble. In the revenue estimates for September of this year, income tax collections for FY 2023 are up from FY 2022, but sales tax collections are 2.8% below what they were at the same time last year. With inflation in the Midwest at 8.1%, the lower sales tax is a sign that people may be cutting back on purchases because of higher prices. This reduced consumer spending could in turn mean less business and money flowing through the Kansas economy or a steep decline in income tax collections.

The beginning of this disparity between income and sales tax collections can be seen in the revenue receipts for FY 2021. The actual tax revenue brought in by the state in FY 2021 was 13.5% higher than that what the Kansas Legislative Research Department and Division of the Budget estimated in November 2020. Broken down, income taxes were 18.1% higher, and sales taxes were only 6.3% higher.

The annual trends have two big takeaways. The first is that the constant underestimation of income tax means that the burden of the most direct and consequential taxes on people and businesses is being overlooked. The second is that the sales tax predictions have been spot on, so when sales taxes start to decrease, it’s a reliable sign the economy is changing.

When the legislature reconvenes in January they’ll be greeted by the Governor’s Budget Proposal that will set the course for spending decisions over the next two years. This proposal, no matter who is governor, will be skewed from reality because of the ever-increasing revenue estimates for the future. Maybe the legislature should demand a better estimating, and therefore spending, process before they agree to spend another dime.