Kansas Title I program has not improved low-income student achievement 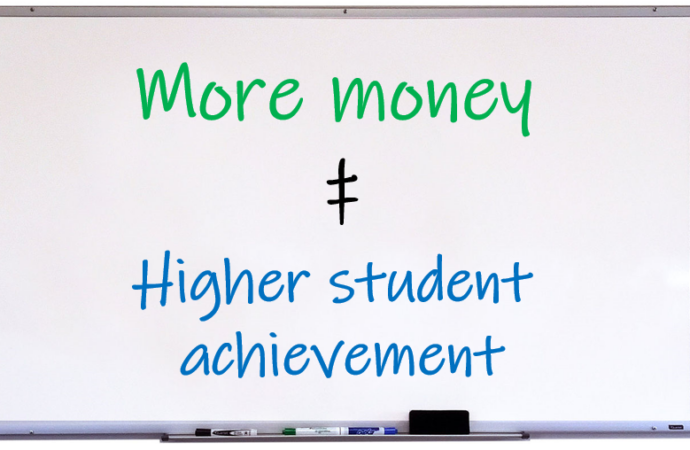 The Biden administration proposes to spend billions more on the federal Title I instructional program, but given the program’s history, the massive increase will likely not improve achievement of the low-income students – including those here in Kansas – Title I was designed to help. This article will show that Title I, despite providing annually approximately $110 million statewide, has done virtually nothing to improve the outcomes of the Kansas students it’s designed to help.

Title I was established with the original federal Elementary and Secondary Education Act (ESSA) in 1965. Its purpose is “to support school districts in educating the nation’s economically disadvantaged students.” The program funds school districts directly, based on a formula largely driven by the number of students in poverty. According to the U.S. Department of Education Kansas received $108,530,780 in the 2019 school year. To wit:

Despite Title I being formula-driven based on low-income students in a district, there are clearly other distinctions that make huge per-pupil allocation differences among the state’s districts which range from  $1,189 to $48. The size of this range allows a fundamental question to be addressed regarding the effectiveness of Title I on the achievement of low-income students. In other words, it’s a test to see if there is a relationship between the amount of Title I dollars and student achievement. To address that I ranked the districts in terms of percentage of their low-income students, then chose every fifth district to get a representative sample of districts with low, middle, and high percentages of low-income students. Below is the table that shows the results of that sample. The 2019 state assessment ELA (reading) scales scores for students who qualified for free or reduced lunches are paired with the Title I distribution per low-income pupil. The percentage of students in each district who qualified for free/reduced lunches ranges from 7.9% in Blue Valley USD 229 to 78.1% in Kismet-Plains USD 483. 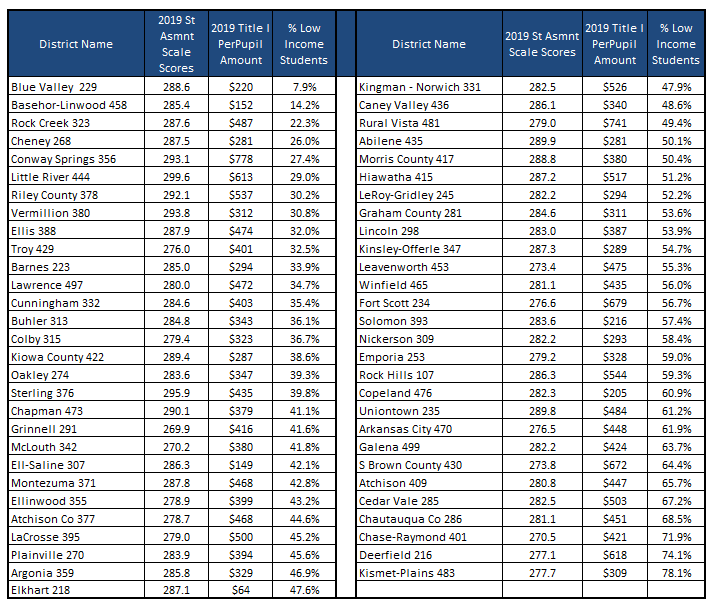 The scatterplot represents the distribution of scale scores by per-pupil Title I allocations for 2019.  If there was a positive relationship between per-pupil Title I spending and state assessment scores the dotted trend line would get higher moving from left to right. That is not the case. In fact, there is a small, but hardly significant, negative relationship between the two variables in this sample. In other words, more per-pupil Title I spending does not improve the achievement of low-income students, those who are the target of the program. 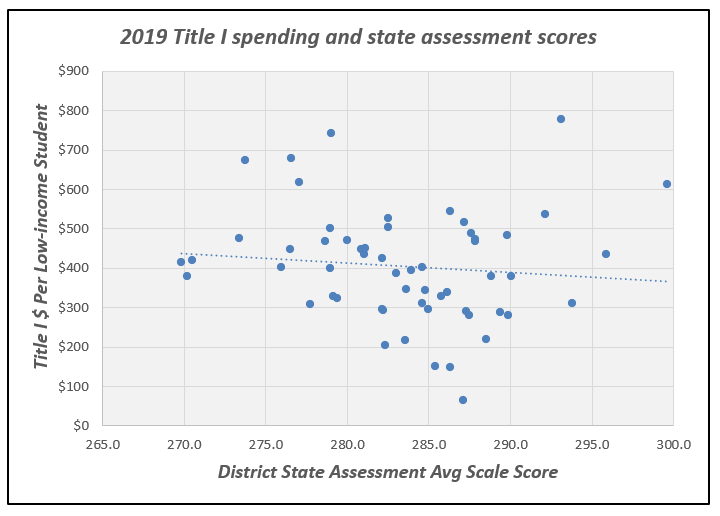 There are a couple of items of note. First, this is not a comparison between low-income and not-low-income students. This is not a gap analysis. KPI has shown here and here along with many other scholars that income-based achievement gaps are significant and not improving. Secondly, this lack of relationship is not a function of the sample presented. The trend line stays virtually identical when including all districts. The use of the sample makes the table and graph easier to see.

Title I funding has flowed to the nation’s school districts for decades. As mentioned in my previous article the Brookings Institute published a report that simply says that nationwide Title I “doesn’t work.” Taking a closer look at only Kansas, it seems obvious that Brookings is correct. Clearly, Title I has not closed income based achievement gaps, which it was implicitly designed to do. Nor does more per-pupil money among the Kansas districts make a difference in the achievement of low-income students.

Since the program doesn’t do what it was created to do, what’s the justification for more than doubling the funding? The likely answer is that it’s merely an attempt to establish a bigger encroachment into the state function of public education and appease the two largest teacher’s unions, the AFT and the NEA, which donate millions of union dues to the Democrat party

Just like the state at-risk program, Title I is seemingly little more than a supplement to the districts’ general fund, to be spent as districts see fit. Doubling the amount of Title I funding will not change that reality, nor help any students improve achievement.