Property taxes assessed for the operation of local government totaled $2.7 billion in 2018 and significant differences in per-resident amounts across the counties indicate large savings opportunities – if the political will exists to take advantage.

As we wrote last month, the $2.7 billion for the operation of local government consumes the largest portion of property tax in Kansas.  This column examines some specific examples of variances among counties with similar populations. 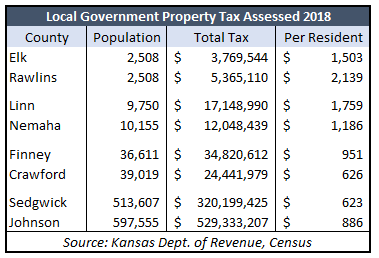 Elk County and Rawlins County each have 2,508 residents according to the U.S. Census but cities, townships, the county and other local government entities in Rawlins County collectively assessed $5.4 million in property tax, while local government in Elk County charged $3.8 million.  If the potential savings of $1.6 doesn’t sound like a lot of money, consider this: it’s an average savings of more than $600 per resident.  Some of that potential savings would go to businesses but even if a third of the savings went to individuals it would still mean a lot.

Finney and Crawford counties are larger, with populations of 36,611 and 39,019, respectively, and so is the potential savings.  Finney County charges $10.4 million in local government property tax than does Crawford County even though it has the smaller population.

And that brings us to a comparison of the state’s two largest counties.  Johnson County is the most populous; with almost 600,000 residents, it’s 16% larger than Sedgwick County but local government entities in Johnson County collectively charged 65% more in property tax.  Johnson County charges citizens and employers $229 million more, which is a 42% premium on a per resident basis.

The complete list of all 105 counties is available at KansasOpenGov.org.

Services certainly vary across counties and that will account for some of the property tax difference, but the next installment of our property tax analysis will explore what is likely the major cause.  As Mercatus scholar Maurice McTeague noted during a recent visit, Kansas is massively over-governed.