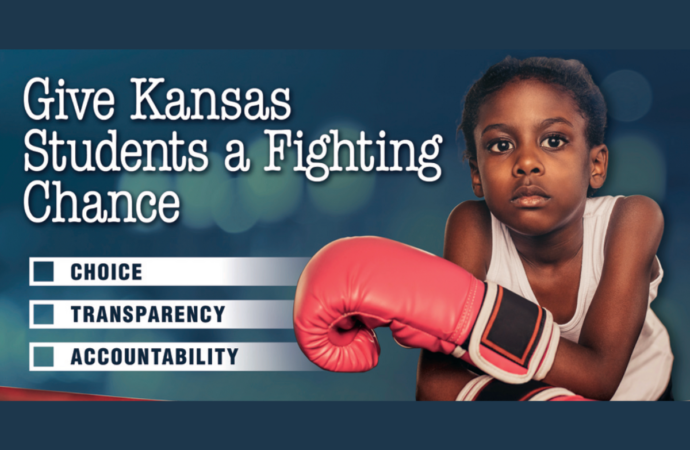 Now, more than ever, Kansas K-12 students must be given a fighting chance to succeed against an education establishment that measures success in terms of dollars and not student achievement. Students and families must be given that chance  through choice, transparency and accountability. In this Q & A session, we hope to answer some frequently asked questions regarding how school choice can help give students that fighting chance.

Q: There has been a lot of chatter about school choice lately, especially in the context of school shut-downs due to the pandemic. What exactly is school choice?

A: The concept of school choice is to give families and students the opportunity to pick an educational path that best suits their individual needs. School choice is a student-centered philosophy, as opposed to the traditional institution-centered approach in which students must attend a certain school based on where they happen to live. Practically, this means that tax dollars follow their child to the school of their choice, not just the public school down the road. This can take many forms, as can be seen here.

Q: Why is that a problem? I hear Kansas has one of the best education systems in the country.

A: Despite what the Kansas education establishment would like you to believe, there are two basic problems with the premise that Kansas schools are doing great. First, results from the Kansas state assessment program show far too many kids need remediation in the basics of math and reading. Second, there are considerable achievement gaps in learning based on family income in virtually all testing. The fact is, Kansas is essentially a middle-of-the-pack state when it comes to education.

Q: Is the idea of school choice something new? Being here in Kansas, I’ve not really heard much about it.

A: School choice is not a new idea. In some New England states, school choice has been around for over 150 years. Charter schools started in the early 1990s.

Q: I’ve heard of charter schools but I’m not sure what they are and how they work.

A: Charter schools have become the most common form of school choice. They are actually publicly funded alternatives to traditional public schools. Charter schools can take many forms and can be operated by private or public organizations.

Q: Kansas has charter schools as an option, right?

Q: Are there other school choice options here?

A: In Kansas there is a tax credit scholarship program targeted to low and middle income students that was passed several years ago. Although the program has expanded over time, students who get a scholarship can escape public schools that are not serving their individual needs and attend a private school. An example of the power of this school choice option can be seen in this YouTube video which focuses on a fifth-grade girl, Alaina and her family, ones who were happy to have the opportunity to choose the school that was right for Alaina.

Q: What are some other school choice options around the country?

A: Many states offer more school choice than Kansas. Most states have better charter school laws that allow for many options for families and students. For example, Arizona has about 560 charter schools that service roughly 232,000 (1 in 5) students across the entirety of the state. Another school choice program that is gaining popularity is called ESA (Educational Savings/Spending Accounts). ESAs provided money directly to families to use for their children’s education. ESAs can provide many options, depending on what a state allows. For example, a family could use their ESA dollars to pay tuition at a private school. Some states provide money for certain special needs students to attend a different school. The same goes for students stuck in low-performing schools.

Q: Wow! I had no idea there were so many alternatives. But don’t they take needed money away from the public schools?

A: That’s what they’d like you to believe, but consider this: Kansas schools spend more than $16,000 per pupil each year, and that amount increases much faster than inflation. Also, the schools combined have more a $1 billion in cash reserves. Not only that, but since much of the funding schools get from state and local government is based on the number of students, so if the students aren’t there, they don’t need the dollars. Does that sound like they need more money?

Q: But isn’t it true that there are laws that prohibit tax dollars from going to religious schools? Doesn’t that violate separation of church and state?

A: Kansas is one of many states that have what is known as a “Blaine amendment” in the constitution that was written to keep public money from going to religious schools. Recently, the Supreme Court has struck down that idea, recognizing “Blaine amendments” are rooted in religious bigotry. The Supreme Court has declared such restrictions violates a person’s right to practice religion.

Q: School choice sounds good, but do students who attend schools of their choosing actually do better in school?

A: The short answer to that is yes, they do. But school choice is much more than simply test scores. The concept of “choice” whether that be where one chooses to live, shop, practice religion, etc. is fundamental to American society. Why should one of the most important aspects of life, education, be excluded from individual choice? Also, choice provides competition, which drives improvement. If schools have no incentive to improve, they will never change the way they do business.

Q: That sounds good and all, but if school choice is such a great thing, why isn’t Kansas on board with it?

A: The public-school lobby is very powerful in Kansas and the education establishment has used that power to keep out any competition. They work hard to make the public believe the current system is just fine and there is no need to change a thing.

Q: What can be done to change it?

A: The first step is public awareness that all is not well and there are alternatives that can benefit Kansas students.