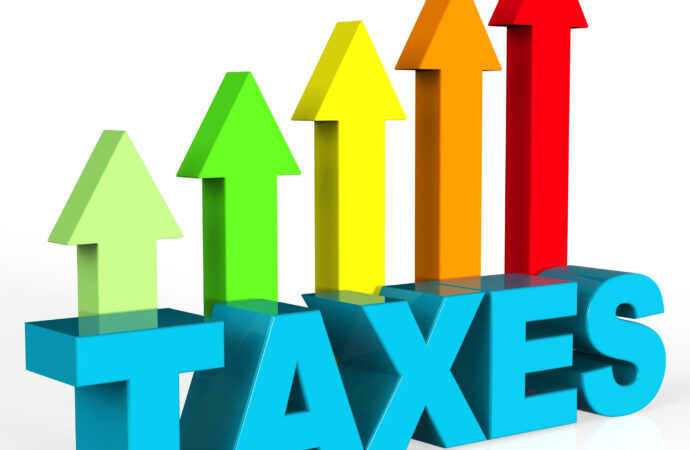 Some state and local officials believe that subsidies – taxpayer handouts to a few, select businesses – are the way to grow an economy, but most people know that picking winners is, by default, also picking losers.  A new study from the Tax Foundation makes that crystal clear. 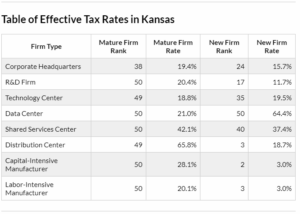 “Tax burdens in Kansas are slightly below average for new firms—and among the lowest in the nation for new manufacturers and distribution centers—but Kansas ranks worst in the nation for mature firms. Kansas offers very low tax costs for new capital- and labor-intensive manufacturing operations and new corporate headquarters due to the Promoting Employment Across Kansas (PEAK) incentive program. Such generous incentives, however, keep tax costs for mature firms much higher than they would be if the tax burden were distributed more equitably. The state ranks 49th or 50th for all mature firm types except corporate headquarters, which rank 38th.”

It’s a very simple concept to understand.  The cost of government continually rises must faster than inflation, so the handouts given to some businesses have to be made up by everyone else.

State and local officials tout the few ‘successes’ when a business accepts a subsidy but they don’t want to talk about those that leave or shrink due to the high tax burden, or those that say ‘no thanks’ after looking into the long-term costs of operating in Kansas.

Property tax, shown in light blue on the chart below, is by far the largest component of the tax burden for most mature business categories.  Our 2020 Green Book shows Kansas has some of the highest effective property tax rates in the nation, as analyzed by the Lincoln Institute of Land Policy. 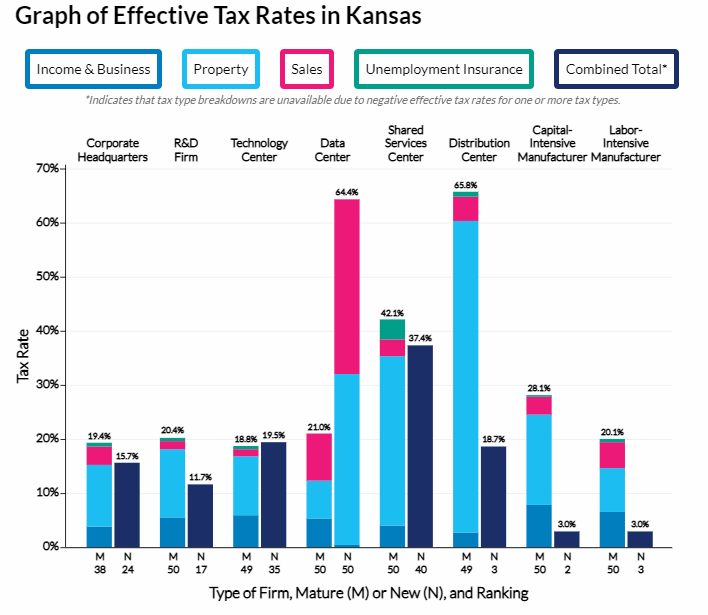 City and county officials and local chambers of commerce know that exorbitant property taxes are a huge barrier for mature businesses, but they fiercely resist efforts to reign in the cost of local government.  For example, cities, counties, and most local chambers even opposed Truth in Taxation, which merely requires local officials to be honest about the entire property tax increase they impose.

But cities, school districts, and counties embed themselves in local chambers of commerce, continually pushing to expand government and driving costs higher.

Dr. Arthur Hall, Executive Director of the Brandmeyer Center for Applied Economics at the University of Kansas, analyzed the efficacy of STAR bond subsidies for Kansas Policy Institute.  He concluded that claims of job growth from the projects were offset by losses in other parts of the city, saying the STAR bond projects “merely rearranged the pattern of economic development.”

Government incentives can appear to generate activity if used, for example, to create a new retail area.  But taxpayers have a fixed amount of disposable income, so if they spend more in the new retail area, they are spending less somewhere else.

Hall says economic research points to the importance of encouraging “gazelles.”  He cites a Kauffman Foundation study that found that, nationwide, “Just [one] percent of companies – those growing the fastest – generate roughly 40 percent of new jobs in any given year.”  But because gazelles emerge out of the trial-and-error process, it is virtually impossible for state or local government officials to identify them.

“Venture capitalists, too, hunt for their gazelles and consider themselves fortunate if they invest in the approximately one out of 20 businesses (per venture fund) that will generate enough investment return to compensate for the 19 failures.”

It begs credulity for state and local government officials to believe they are far better at finding gazelles than venture capitalists who invest their own money.  Indeed, subsidies aren’t given to gazelles; they go almost exclusively to mature firms.

It’s not rocket science – reducing the size and cost of state and local government is the key to having lower tax rates and a more competitive business climate.  But Lt. Governor/Commerce Secretary David Toland’s economic strategy is more of the same – subsidies and a host of government spending programs that keep taxes high.

The subsidy-laden strategy promoted by Toland and others has never worked.  For the record, Toland is a Democrat but it’s not a D vs. R thing; Republican administrations in the past have done largely the same and many of the local chamber officials are Republicans.

Kansans need state and local leaders with the courage to let go of failed strategies and who will go about the hard work of reducing the size and cost of government.

[i] Finance, insurance, real estate, rental, and leasing combined produced $32.6 billion in 2020 GDP, but the largest component of that category (Real estate and rental and leasing) was less than manufacturing, at $22.8 billion.