Truth in Taxation is a model for legislative change 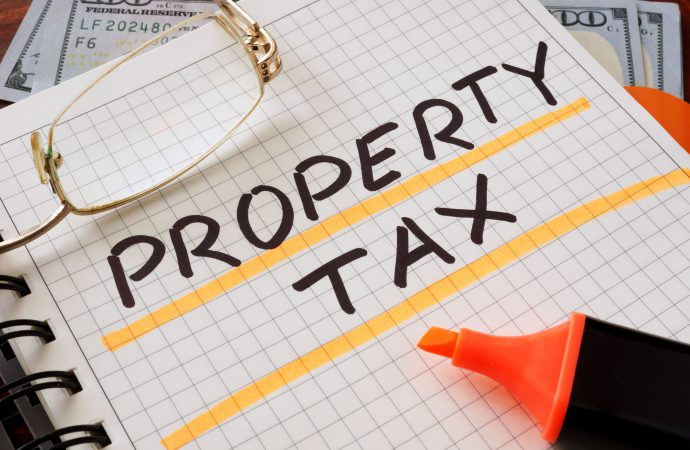 Forcing local officials to be honest about the entire property tax increase they impose will save taxpayers hundreds of millions over time because city council members and county commissioners know they won’t stay in office if they vote for the big increases they quietly imposed in the past.  My recent joint column with my colleague Jonathan Williams in National Review told the nation about Truth in Taxation property tax reform coming to Kansas, which promises a significant reduction in tax burden.

The Kansas effort was greatly helped by having successful models to study in Utah and Tennessee, where legislators implemented variations of Truth in Taxation over 30 years ago.  Now, we want to ‘pay it forward’ with an inside look at the strategic moves that led to its passage with strong bipartisan majorities in the House and Senate.

Far too often, good ideas fail (or don’t even get off the ground) for lack of a strategic plan.  The odds of success dramatically increase with a consensus of key players in advance and robust communication tactics that trigger emotional grassroots demand for change.

First who, then what

In Good to Great: Why Some Companies Make the Leap… and Others Don’t, author Jim Collins says, “Those who build great organizations make sure they have the right people on the bus and the right people in the key seats before they figure out where to drive the bus. They always think first about who and then about what.”

Before even considering ‘what’ to do, a team of subject experts was assembled in the summer of 2019, led by Senate Tax Chair Caryn Tyson.  She brought together legislators from the House and Senate, local officials, property owners, legal experts, and policy nerds (like me).

First, we compiled a comprehensive list of reform possibilities with input from everyone on the team.  Next, we used a weighted decision matrix to prioritize dozens of issues identified by the team, with transparency rising to the #1 priority. (Freezing or limiting valuation increases was at the top, but since that requires a constitutional amendment in Kansas, it was decided to defer that effort for various reasons.)

After what, then how

The team settled on about a dozen issues at the top of the priority list, and then we turned to the ‘how’ – how should we communicate the need for change and what change would look like, as well as the needed statutory changes.  Some of us focused on the legislation and others worked on communication. 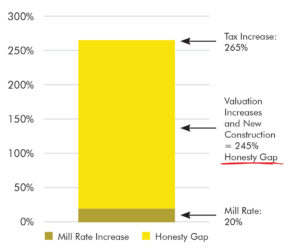 Kansas Policy Institute’s communication wizard, Ellen Hathaway, crafted powerful messages to imprint the transparency issue on taxpayers’ brains.  One message focused on closing the Honesty Gap. Taxpayers are furious with local officials who claim to ‘hold the line’ on property taxes, referencing the change in mill rates, while collecting big tax increases from valuation changes.  The adjacent example shows a city increased the mill levy by 20% between 1997 and 2019, but taxes increased by 265%; the 245-point difference is the Honesty Gap.

Keeping with the honesty theme, Ellen created a Bee Honest Kansas campaign that drove people to BeeHonestKansas.com (because, you know, property tax stings).  Truth in Taxation proponents were coached to explain the legislation, saying, “All this does is ask local officials to be honest about the total property tax increases they impose.”  This also forced opponents to try to explain why they didn’t want to be honest.

Taxpayers didn’t have to know the bill number or remember a lengthy description.  The message was so strong that some people said, ‘oh, that be honest thing? Yeah, I’m for that.’

KPI has been raising awareness for years of the severe need for reform.  Our KansasOpenGov website tracks changes in property tax, mill rates, population, and inflation since 1997 for every county and more than 30 cities. 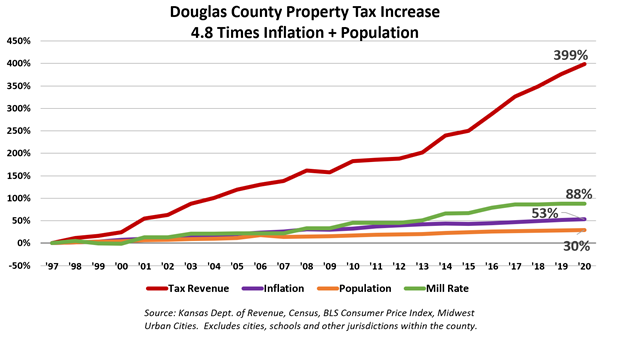 Pictures like this show how local officials have increased tax burdens, and citizens only needed to remember that property taxes have increased several times greater than inflation and population.

Months of collaboration led to several bills being introduced at the beginning of the 2020 legislative session.  Truth in Taxation, including a prohibition on valuation increases solely for routine replacement and repairs, and our other reforms quickly passed the Senate, but progress stalled in the House, and then COVID shortened the session.  Truth in Taxation finally passed on the last day of the session but Governor Kelly vetoed it with no opportunity for a veto override.

We reintroduced everything this year and it passed with strong bipartisan majorities; 30-5 in the Senate and 120-3 in the House.   Cities and counties lobbied hard against Truth in Taxation but this time, Governor Kelly signed it into law.  Another bill also was signed into law that contained the rest of the reform package.

All told, the collaborative team effort resulted in a dozen property tax reforms.

Anything is possible with the right approach and dogged determination.  For a long time, no one thought school choice would ever come to Kansas, but we finally passed a tax credit scholarship program and are now working to expand it and add education savings account to the mix.  And who would have thought Right to Work would ever come to Michigan – but the Mackinac Center for Public Policy did it in 2012 after many years of effort.

School choice in Kansas and Right to Work in Michigan are good examples of expanding the Overton Window, named for the late Joe Overton, former Executive VP at Mackinac.  Overton posited that shifting the window of ideas politicians can support without unduly risking their electoral support is key to creating state policy change.

We aren’t done with property tax reform, but we are already laying the groundwork to achieve the next ‘impossible’ task.