Use Excess Revenues for Tax Relief, Not More Spending 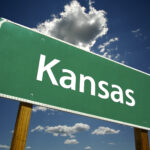 Kansas took in 33% more in revenues in the first quarter of FY 2022 than the first quarter of FY 2020 before the COVID-19 pandemic, according to the Kansas Department of Revenue’s 2021 report. This trend isn’t new: in FY 2021, the state recorded an actual collected tax revenue $758 million higher than its estimate. This is all part of a larger trend of the state’s frequent gaps between estimates and reality. Trends for new revenues can be seen in the table below. 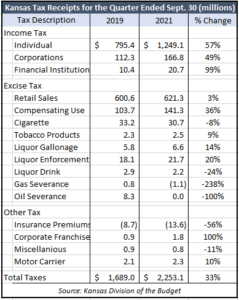 and income growth. However, there hasn’t been a 57% increase across Kansas – in fact, by the end of 2019, Kansas’ real median household income was declining. At the same time, the revenue from the retail sales tax only increased by 3% between the two periods. Higher incomes suggest higher consumer spending as people have more cash to spend as wages increase. But, that isn’t happening here.

While at first, these numbers may seem a cause for celebration, legislators and observers should be cautious about acclaiming them as a sign of success. For one, the continued budget surplus is likely a sign of a time when Kansans are still recovering from the pandemic. Since October 1st of 2019, Kansas aggressively responded to the Supreme Court case South Dakota v. Wayfair Inc. by imposing a sales tax on goods from remote sellers without a physical presence in the state; done by executive fiat no less. While This tax is a large part of why the compensating use excise tax was 36% larger in the first quarter of FY 2022 than it was in the first quarter of FY 2020.

The government should tax only to the extent necessary to efficiently provide services. Outsized growth in tax revenue is a sign that taxes may be too high or unnecessary for the government to efficiently operate. Excess revenue also presents an opportunity to reduce high tax rates; instead of spending more, use that money to gradually reduce marginal income tax rates or the sales tax rate.

Kansas was ranked the 4th least friendly state for retirees this year by Kiplinger because of full taxation on private retirement plans, non-Kansas public pensions, and Social Security benefits for people with incomes greater than $75,000. Kansas has the 9th highest combined state and local sales tax rate nationwide. According to the Tax Foundation, Kansas ranks dead last nationwide with the highest tax rate on mature research and development business (20.4%), with similarly high rates for mature technology centers (ranked 49th, 18.8%), data centers (ranked 50th for both new and mature firms), and dead last for mature capital and labor-intensive manufacturers. In light of these taxes, Kansas’ surplus seems harmful considering where that money is from. Furthermore, Kansas’ recent history has been marred by boom-or-bust budgets. Addressing over-taxation could help restore Kansas to a balanced budget.

Seeing the size of the surplus and growth in corporate income tax revenue, the state should take advantage of its flexibility with the current surplus and bring down some of its tax rates. A policy of reduced or eliminating full taxation on retirees would help bring down the cost of living of seniors in Kansas. Kansas government needs to remember its role isn’t to rake in taxpayer dollars and expand: it’s to guarantee the life and liberty of its citizens.