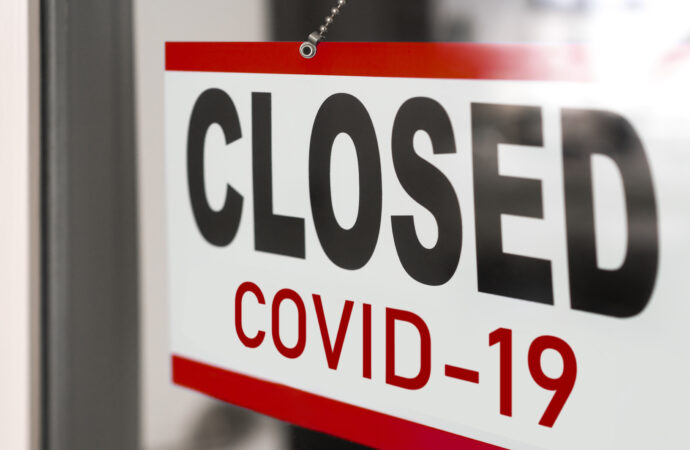 During the worst of the public health crisis, Kansas Governor Laura Kelly locked in place the COVID-19 economic shock. That means state policy closed businesses and ended jobs longer than necessary. As a result, the April jobs report announced Kansas lost 130,400 total jobs. Analysis of this jobs report suggests the state economy is shrinking at a rate of $66 million a day. 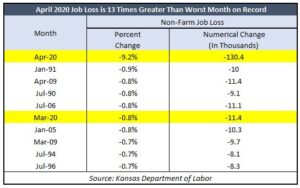 Kansas lost 130,400 total nonfarm jobs in April 2020, a monthly drop of 9.2%, with over 90 percent of that drop coming from the private sector.  The March jobs report showed a downward revision of 5,500 jobs or a monthly decline of 11.4%. April and March job growth are the biggest and 6th biggest decline ever recorded, respectively. In fact, the April jobs report is over 13 times greater than the previous worst month on record. 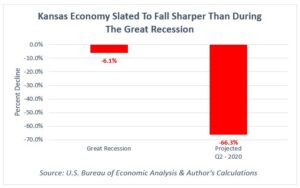 Using the April jobs report, the Center for Entrepreneurial Government predicts the Kansas economy could shrink by 15.3% from Q1-2020 to Q2-2020 (See Appendix for methodology). Assuming this rate is the average for four quarters (annualized), the Kansas economy would decline by 66.6%. In the adjacent table, we compared the 66% annualized drop to the annual decline during the Great Recession. Kansas’s real GDP fell by 6.1%  from Q2-2008 to Q2-2009. By comparison, the economic decline noted by April jobs is at least ten times larger than the Great Recession. Take the drop in that Kansas economy from Q1-2020 to Q2-2020 and divide it by 365 days in a year. In other words, the economic cost of the April job loss is $66 million/day for an entire year. Time will tell whether the May and June jobs report will maintain April’s stark decline or lessen it.

Going into mid-April, statistics from Homebase Inc detailed the economic devastation caused by the continued lockdown. Kansas local businesses were down 46%, while hourly jobs were down roughly 40%. The May report may show a consistent decline in jobs, as signs suggest the negative economic hit persisted into the latter half of April. 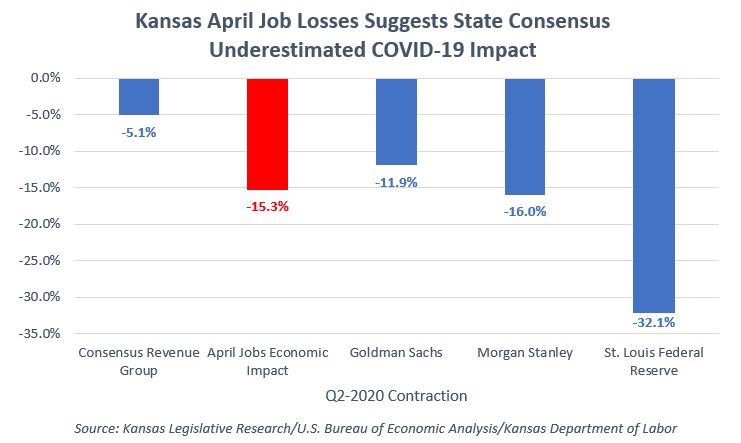 The negative impact is clear. Consensus projections are the outlier, while national forecasters and April jobs are far more catastrophic. It indicates the scale to which the state forecasters are potentially underestimating the COVID-19 impact on the state government budget. Kansas would see a billion-dollar gap outside of state predictions if the April job loss holds throughout the quarter.

For Kansans to recover from the economic shock COVID-19 and government actions, Kansans must feel confident to return to work. That confidence needs a consistent government policy that works toward economic recovery. Such confidence also needs an environment of safety amidst a real public health concern.

Governor Kelly’s lift of the “chaotic” statewide lockdown and “Ad Astra” phase-out plan most certainly helps to alleviate the COVID-19 economic damage. However, the state government can do more to help foster more confidence among families and businesses. Governor Kelly and the Kansas Department of Labor can increase the earnings exemption on unemployment insurance to encourage more job growth. Additionally, there are many options outlined in our “Post-COVID Recovery Plan.” These recommendations include, but are not limited to, clawing back regulations that hinder startup activity, lowering property and sales taxes on Kansas families and commerce, and limiting wasteful state government programs.

As stark as the April jobs report is, it doesn’t mean Kansas’s economic environment is devoid of hope. It’s unlikely the state government has the power and influence “flip the switch” and turn on the state economy. However, the state government can allow Kansas businesses and families a return to normal.

*The jobs report and the unemployment rate stem from two different surveys; the Current Employment Statistics and the Local Area Unemployment Survey. These surveys move together but are not intended to equal each other.

We used the change in Kansas reported monthly payrolls to estimate the change in real GDP. Change in monthly payrolls is the log of the ratio of the current quarter to the previous quarter multiplied by 400. The quarterly payroll log-ratio, along with 3 lags of real GDP growth, was regressed on current real GDP growth. Using data from Q1 – 2005 to Q4 – 2020, we predicted Kansas real GDP for the 1st and 2nd quarter of 2020.

To see our methodology in translating economic performance to state tax revenues, click here. The table below compares Kansas’s total tax estimates from the April report to estimates given from Goldman Sachs, Morgan Stanley, and the Federal Reserve Bank of St. Louis.