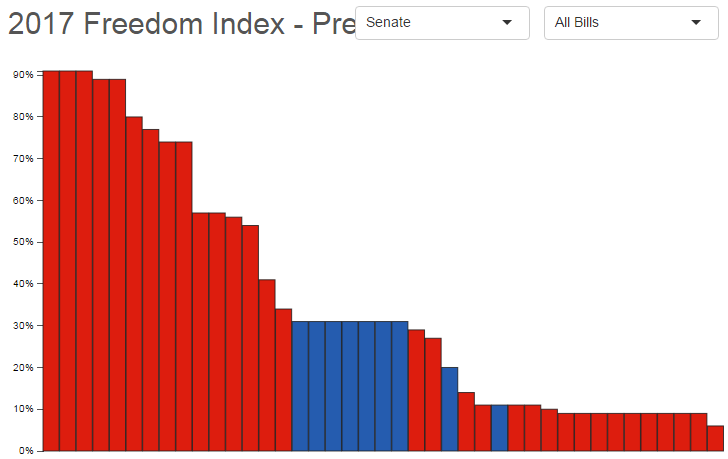 The Freedom Index published by Kansas Policy Institute has repeatedly shown the legislative political division to not be about Democrats and Republicans but about legislators’ view of the role of government, and the above June 2 update of 2017 Freedom Index certainly bears that out.  With a score of 50 percent being considered neutral, there are 13 Senators at the top of the list with positive scores and 13 Senators at the bottom of the list – and every one of them is a Republican.  Republicans are represented by red bars in the above chart and Democrats are shown in blue.

An informed citizenry is an essential element of maintaining a free society. Having a deeper understanding of how legislation impacts education freedom, economic freedom and the constitutional principles of individual liberty and limited government allows citizens to better understand the known and often unknown consequences of legislative issues.

The Kansas Freedom Index is intended to provide educational information to the public about broad economic and education issues that are important to the citizens of our State.  It is the product of nonpartisan analysis, study, and research and is not intended to directly or indirectly endorse or oppose any candidate for public office.