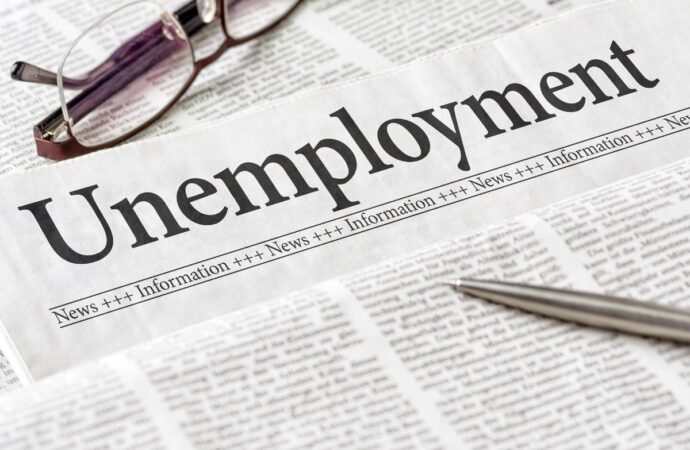 Kansas’ recent job losses may be driven by COVID-19 shutdowns and health impacts. However, findings from the Green Book 2020 say Kansas was in the economic doldrums long-before the COVID crisis. Kansas ended 2019 with the slowest job growth rate in Plains and the 43rd fastest growth in the country.

According to the June jobs report, the Kansas economy is 70,000+ private jobs under its January level. That deserves an in-depth discussion soon. For now, it’s important to grasp Kansas as among the slowest growing states in the nation in 2019. The Green Book 2020 highlights the relationship between a state’s economic health and the size of its government. The table below pulls private jobs data from the Green Book 2020, as recorded by the Bureau of Labor Statistics (BLS), and by the Bureau of Economic Analysis (BEA). When it comes to BLS private-sector jobs (private firms in the unemployment insurance system), Kansas grew 8.3% over the past two decades. BEA private jobs (all private jobs plus sole proprietors), Kansas fared slightly better over the 20 years, with a 13.2% growth rate. However, regardless of measure, Kansas’s job growth paled in comparison to most other states. Kansas ranked the 43rd fastest (BLS) and the 42nd fastest (BEA) growing state.

This data makes clear that Kansas’s anemic job growth isn’t a regional problem. Among Plains states and economic peers, Kansas is the 2nd slowest-growing state by either BLS or BEA jobs measure. The adjacent table includes the growth rates of states with & without income taxes and the ten lowest/highest tax burden states. No income tax states have nearly double the growth rate of income taxing states. No income tax states also grow more than three times faster than Kansas. The 10-lowest burden states are more than 50% faster than the highest-burden states. They are also more than three times faster than Kansas. 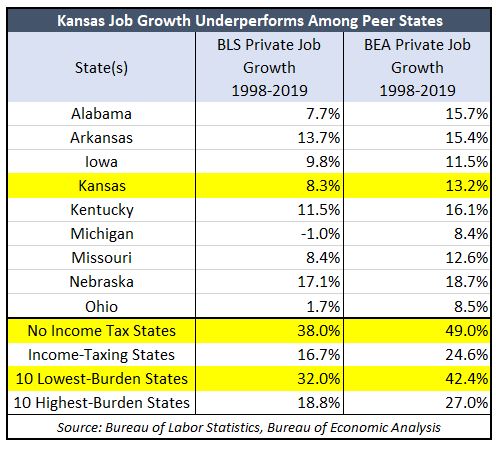 While not exhaustive, state job performance suggests that state that tax less tend to see faster job growth. This is because states with lower tax burdens take fewer resources from their respective private sectors, allowing them to flourish. Besides, fewer taxes means fewer tax dollars for the government to spend, which means less government duplication of private-sector efforts. A decreased “crowding out” also helps the private sector grow faster. As of 2020, Kansas has the 9th highest state and local sales tax rate in the country, one of the highest top marginal tax rates in the Plains region and is home to the highest effective property tax rate in the nation. Such burdens grow Kansas government coffers but at the expense of Kansas families and businesses.

According to the data compiled in our Green Book 2020, Kansas was a notable job growth laggard. This created anemic job performance was made worse by the COVID-19 pandemic. To grow the available jobs for Kansans, policymakers should look at reversing its tax climate.