5 things you need to know about property taxes in Kansas 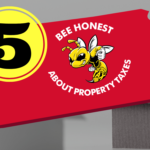 The heavy burden of high property taxes is taking a toll on Kansans. But, there are solutions. Our local governments should address this crisis with a sense of urgency and stop the practice of backdoor tactics that raise property taxes without a vote.

It’s time for transparency and accountability. Here are the top five things homeowners need to know about property taxes in Kansas.

Property tax increased by 151% between 1997 and 2018, or more than three times the inflation rate of 50%.  Property tax for local government (cities, counties, townships, etc.) totaled $2.7 billion in 2018 or about 54% of all property tax.  Local government also imposed the largest increase, averaging 168%. 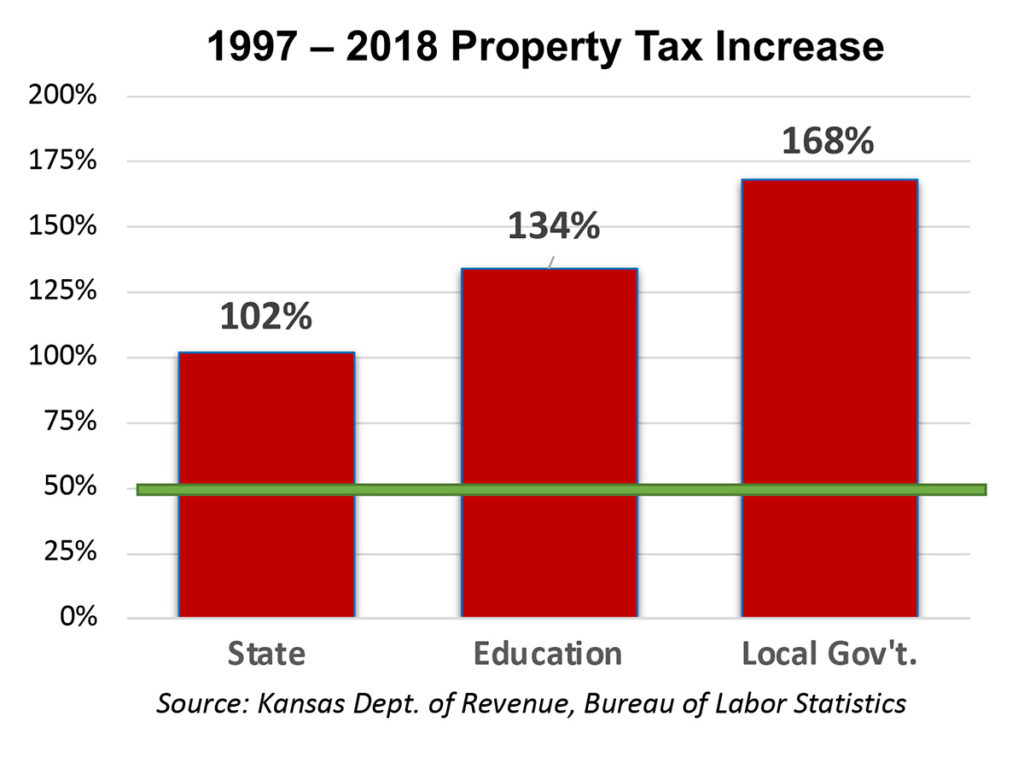 Public schools and community colleges account for about 45% of the total, taking in $2.2 billion, and only 1% of property tax goes for the operation of state government.

Some city and county officials say they’re ‘holding the line’ on property taxes, but voters are fully aware  that property tax has been rapidly increasing because of valuation changes.

This chart shows Riley County increased property tax by 265% between 1997 and 2018, according to the Kansas Department of Revenue. 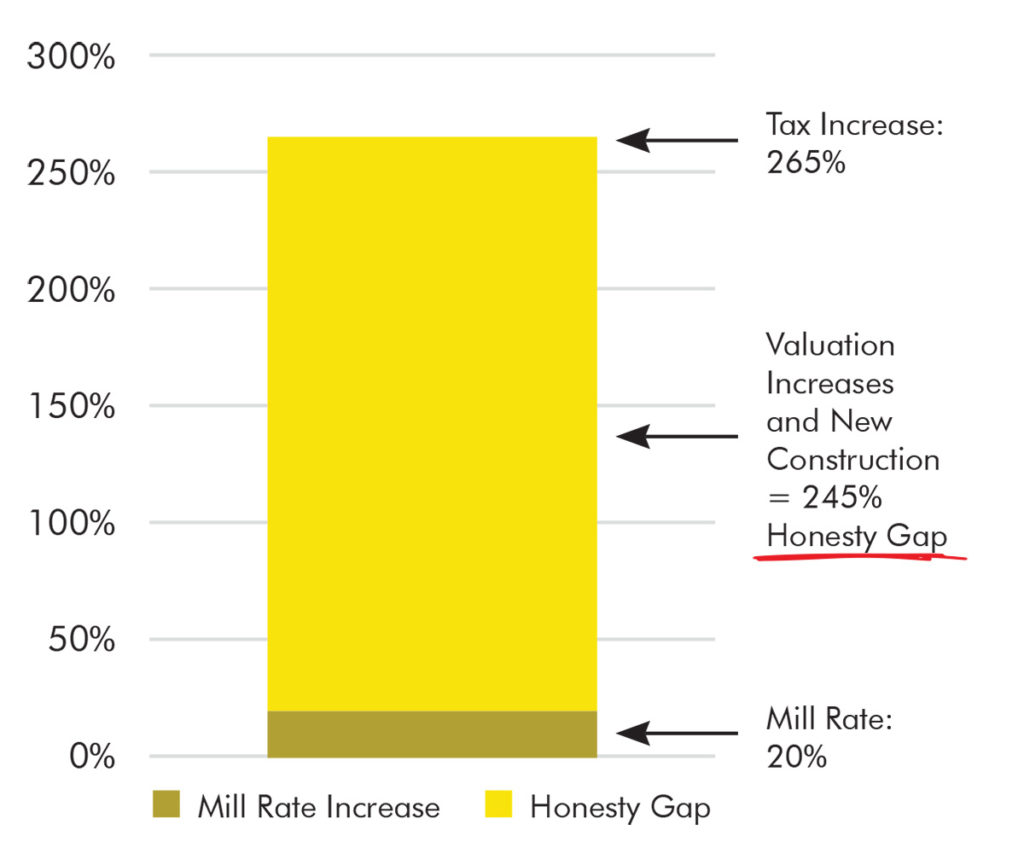 And yet the mill rate only went up 22%. That huge, 245-point difference between the actual tax increase and the change in the mill rate has created an honesty gap in taxpayers’ minds.

Mitchell County has the largest honesty gap among counties.  Property tax for county operations jumped 402% while the mill rate increased by 120%, creating a 282% honesty gap.

3. Legislation to close the honesty gap

Senate Bill 294, which is being discussed in the Kansas Senate currently, is modeled after the Utah legislation that has successfully reduced property tax rates.  It simply requires city and county elected officials to vote on the entire property tax increase.

SB 294 doesn’t limit spending and elected officials don’t have to get public approval.  They just have to vote on the entire tax increase they impose each year. 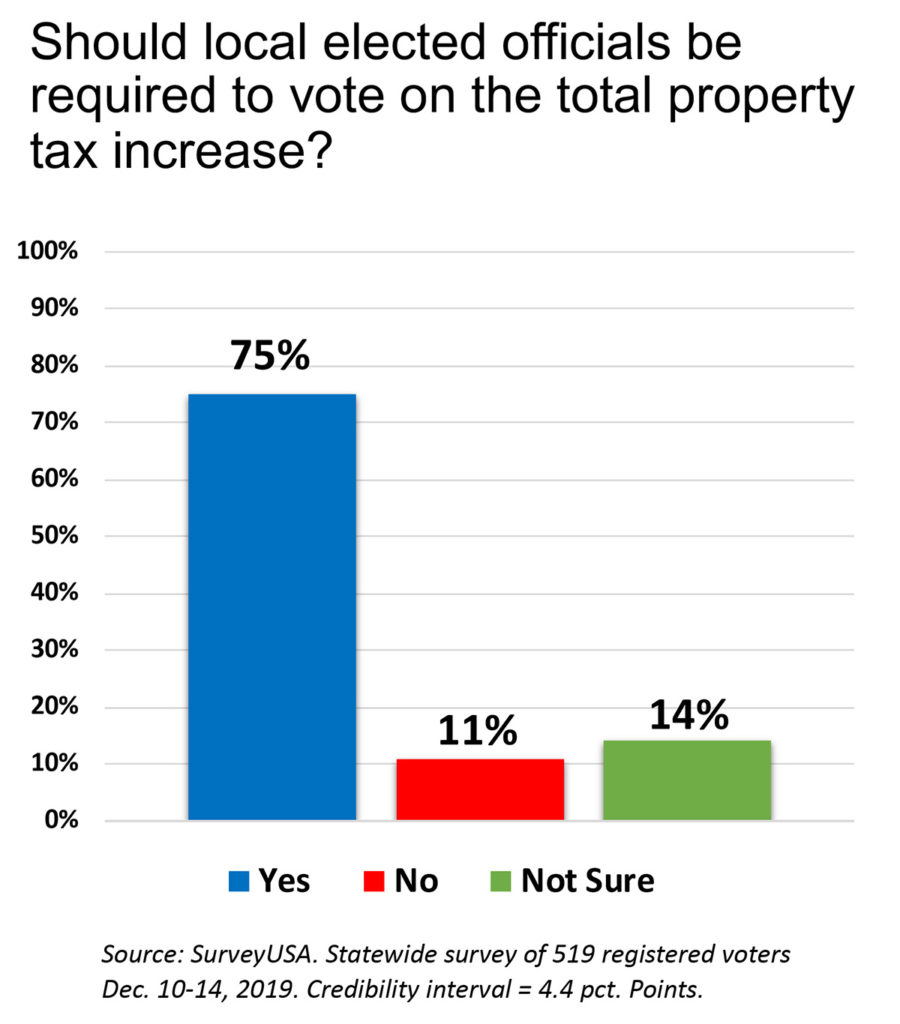 Cities and counties oppose SB 294 but voters overwhelmingly support this idea.  A December 2019 public opinion survey conducted by SurveyUSA on our behalf asked whether local elected officials should be required to vote on the total property tax increase.  75% said ‘yes,’ and only 11% said ‘no’.

Support crosses all ideological and geographical lines.  73% of self-described liberals and moderates and 80% of conservates favor the change.  Geographic support across the four regions (Western, Eastern, Wichita area, and Kansas City area) ranges from 72% to 78%.

4. Kansas has the highest rural property tax in the nation

Kansas’ rural rankings, comparing the largest county seats in non-metropolitan areas with a population between 2,500 and 10,000, are among the worst in the nation. Iola represents Kansas and has:

Comparing the largest city in each state, Kansas has:

Property tax is an especially large barrier to economic growth in rural areas.  The 4.4% effective tax rate on commercial property in Kansas is more than double the rate in Missouri and Nebraska and more than four times the ETR in Oklahoma. 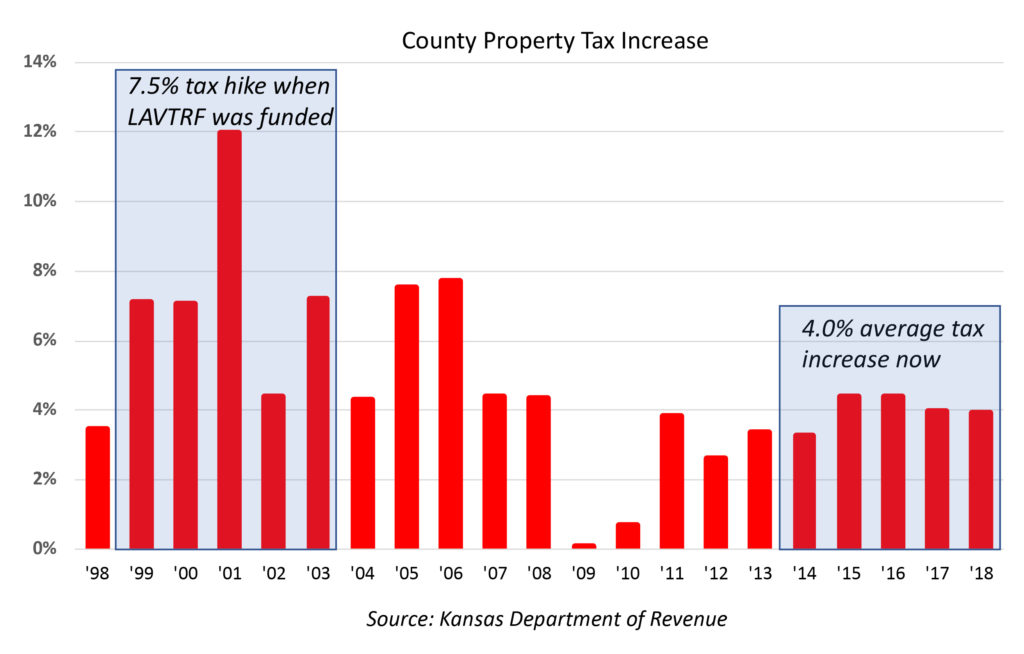 There is no enforcement mechanism in LAVTR.  In other words, cities and counties don’t have to prove they reduced property tax or even hold property tax flat.  But even if it produced dollar-for-dollar local property tax reductions, the program merely leads to higher state sales and income taxes.

Kansas is already facing long-term budget deficits, so giving state money to cities and counties only increases the deficit and puts more pressure on sales and income tax increases.