Houston, we have a spending problem 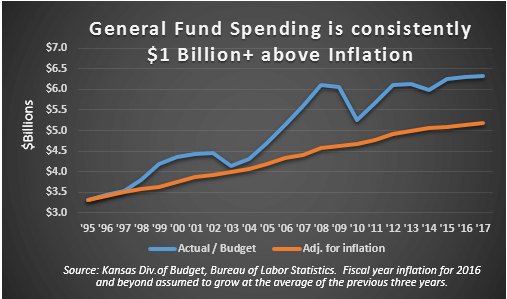 Hyperbole-laden claims from special interests, certain legislators and editorial writers are giving Kansans and the world the impression that revenue shortfalls have led to apocalyptic spending cuts.  That’s not true, of course, but the battle for control of the message is about something much bigger than agency spending levels.  In Chapter 4 (Lessons from Kansas: A Behind the Scenes Look at America’s Most Discussed Tax Reform Effort) of “Rich States, Poor States,” authors Arthur Laffer, Stephen Moore and Jonathan Williams explain that Kansas’ tax reform “… has served as something of a proxy war between big government advocates and those who would prefer to shrink the size and scope of state government.”

Revised budgets for FY 2016 and FY 2017 just approved by the Legislature show that another new General Fund spending record will be set this year at $6.298 billion and next year’s $6.325 billion will set yet another record.  Let’s repeat that for the sky-is-falling crowd. General Fund spending is going up, not down, and is at record-setting levels. 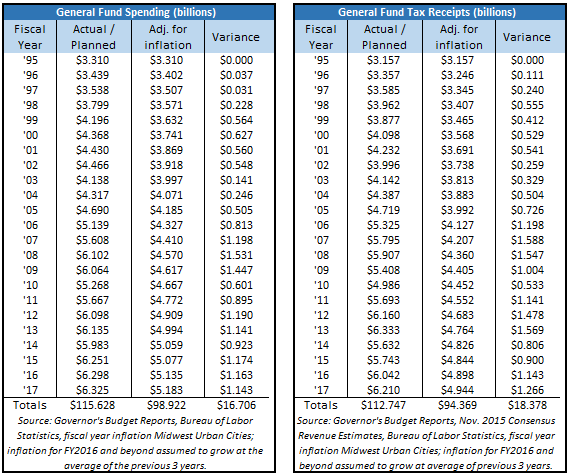 Big government advocates don’t want to admit this, because the amount of taxation needed to provide necessary services is simply driven by the amount each state chooses to spend on those services. Simply put, states that spend less, tax less. States that tax income spent 48 percent 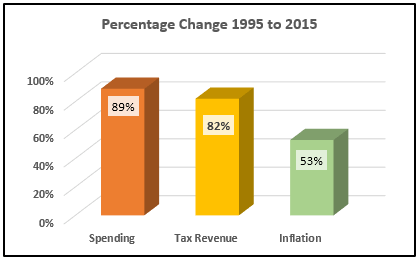 Now that the Kansas budget is finalized, legislators can turn their attention to the tremendous opportunities in the Alvarez and Marsal efficiency study, which uncovered more than $2 billion worth of savings over a five-year period.  A few hundred million in savings would go a long way toward solving that gigantic spending problem.

[i] When the majority of legislators in both parties would not support efficiency measures to balance the budget last year, the state sales tax rate was increased from 6.15% to 6.5% effective July 1, 2015.