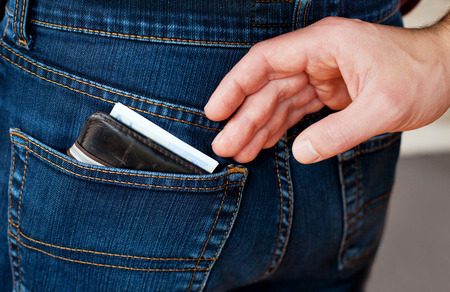 Pay increases for Kansan families were undermined over the past year by inflation, causing a loss on average as changes in salaries failed to keep up with big price increases. At the same time, Kansas state income tax increased from inflation-drive wage increases. 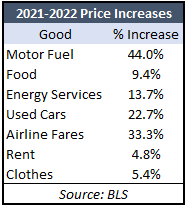 From April 2021 to April 2022, Kansans’ average nominal weekly earnings increased by 7.4% while inflation for the Midwest was 8.2%. On an annualized basis, this means that the average Kansan worker may appear to have gained $3,501 more to their wages, they would have had to make $3,882 more just to keep up with inflation. On that basis, the average Kansan lost $381 in real income due to inflation last year.  But the loss is likely much more for many people, depending upon how they spend their money, as detailed in the adjacent table.

Kansans are also paying higher taxes as a result of inflation, which puts them in a deeper economic hole.  The Kansas Income Tax is based in part on a percentage of the taxpayer’s income. For instance, taxpayers filing alone making more than $30,000 pay $2,505 as well as 5.7% of their income. Federal tax tables are indexed to avoid taxes inflation-driven wage increases, but Kansas doesn’t do this. So, the incremental state income tax for those in the 5.7% bracket on the annualized $3,501 increase is $200.

With the last economic quarter having negative GDP growth, some economists have expressed concerns over an upcoming wave of stagflation: a combination of high inflation and a stagnant economy that means high unemployment and increasing costs of living. Stagflation was last seen in the U.S. in the 1970’s during an oil crisis that constrained transportation and other economic activity. Sound familiar?

Now, just as in the 1970s, years of short-sighted decisions (i.e., Nixon price controls, Great Society spending, etc.) created an inflationary tinderbox upon which the oil shocks landed and sparked inflation. Today, government shutdowns froze demand upon which shortages in key jobs like truckers have caused the “supply-chain crisis” and driven up the price to create and ship goods. Simultaneously, billions in federal aid from the CARES Act, ARPA, the $1 trillion transportation infrastructure bill, and billions in stimulus checks or other cash relief to people and businesses means that there’s a lot of cash to spend. Constrained supply and artificially high demand have driven prices up. As Milton Friedman said, “Inflation is always and everywhere a monetary phenomenon in the sense that it is and can be produced only by a more rapid increase in the quantity of money than in output.” In layman’s terms, too few dollars chasing too few goods.

Inflation is an issue bigger than the Kansas government alone can solve: so what does it mean for legislators? The answer is simple: enact policies that reduce the cost of government and use the savings to cut taxes. Some ideas include:

Just a little more consideration as to whether that new government position is needed, if procurement could wait, or whether that new expenditure is really worth its value saves Kansas families money in taxes they don’t have to pay. That could make all the difference in keeping the cost of living low.