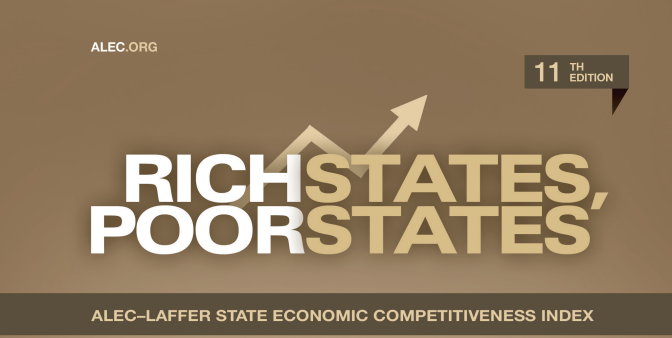 The annual “Rich States Poor States” report published by the American Legislative Exchange Council ranks Kansas #26 in Economic Outlook for 2018, which is unchanged from the previous year. 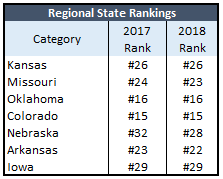 Among regional states, Missouri (#23), Oklahoma (#16), Colorado (#15) and Arkansas (#22) have higher ranks while Nebraska (#28) and Iowa (#29) are slightly lower.  Missouri, Nebraska and Arkansas improved their overall ranking while all other regional states remained the same.

The Economic Outlook rankings are a forward-looking forecast based on the state’s standing (equal-weighted average) in 15 important state policy variables. Data reflect state and local rates and revenues and any effect of federal deductibility.

Kansas fell from #15 to #24 for Top Marginal Personal Income Tax Rate as a result of the big 2017 income tax increase, which also caused a drop from #46 to #47 for Recently Legislated Tax Changes and from #25 to #27 for Personal Income Tax Progressivity.  Income Tax Progressivity was measured as the difference between the average tax liability per $1,000 at incomes of $50,000 and $150,000; the ranking decline on this measure means residents at those income levels are paying a higher tax rate on the same income than prior.

Kansas also fell from #27 to #28 for Top Marginal Corporate Income Tax Rate; there was no change in the corporate rate by Kansas fell because other states reduced rates.  Authors Steven Moore, Arthur Laffer and Jonathan Williams say this shows how states can become less competitive even by doing nothing.

Ironically, ranking declines from actions taken by the 2017 Legislature were offset by gains from actions taken by previous legislatures.  Kansas improved from #29 to #22 for Debt Service as a Share of Tax Revenue, which is defined as interest paid on debt as a percentage of total tax revenue based on information comes from 2015 U.S. Census Bureau data.  The ranking for State Liability System improved #19 to #18 based on state tort systems, with information comes from the U.S. Chamber of Commerce Institute for Legal Reform 2017 Lawsuit Climate Survey. 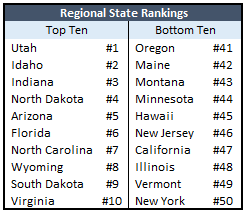