Kansas and 17 Other States Lose Private-Sector Jobs in May 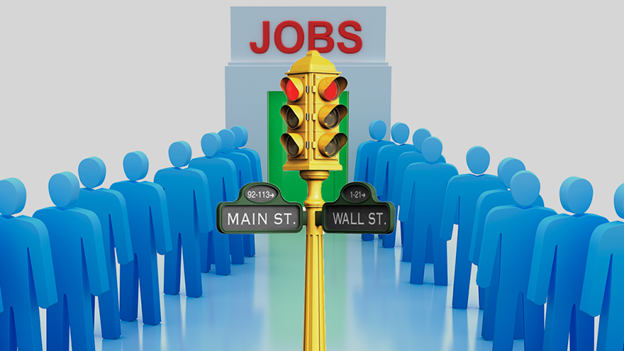 Updated jobs numbers for April show that private-sector jobs were 500 more than what was estimated last month; previous job numbers are routinely updated in subsequent months to reflect more accurate information. At the same growth rate that Kansas has experienced since the start of 2021, the state will fully recover to its pre-pandemic level of jobs sometime well into 2023. 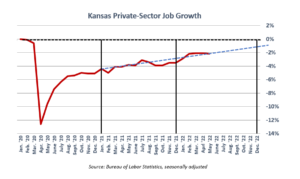 The main job losses came from the Leisure and Hospitality, Financial Activities, and Retail Trade industries, which all lost 1,300 jobs each last month. Construction lost 400 jobs as well. Meanwhile, Education and Health Services and Professional and Businesses Services (primarily around Administrative Support) saw job gains of 900 and 1,500 respectively. Other industries like Manufacturing and Wholesale Trade saw gains and losses of below 300 jobs. At the same time, government grew by 100 jobs in Kansas. These definitions are those used by the Department of Labor.

The unemployment rate in Kansas sits at 2.3%, which is lower than the 2.4% in April. At the same time, Kansas’ labor force participation rate increased from 66.3% in April to 66.5% in May. Kansas is still below its pre-pandemic participation rate though, which in January 2020, was 66.9%.

The low unemployment rate is good, but the state is 25,200 jobs below its January 2020 level. Employers are struggling to find qualified people who want to work. If Kansas is unable to create jobs, people who want to work may migrate elsewhere to find them; this would continue a four-decade trend in Kansas of economic stagnation and outmigration. 18 states have recovered and exceeded their pre-pandemic job level, including nearby Colorado and Arkansas. Nebraska is only 400 jobs away from complete recovery.

This week, the Federal Reserve announced a hike of the federal funds rate in an attempt to fight ongoing inflation that is eating into Kansans’ wage growth. A higher federal funds rate leads to higher interest rates at banks, which discourages businesses from taking loans and spending while simultaneously creating a greater incentive for people to save their money instead. The consequence of this is that there could be less job growth in the future due to less business spending.

A key way that Kansas governments can help families and businesses make it through today’s high inflation is by approaching another government cost on the economy: taxes. From simple reforms like indexing state tax brackets for inflation to more long-term goals like cutting back ineffective subsidies and discretionary spending, legislators have the chance to keep money in taxpayers’ wallets, and that makes all the difference.