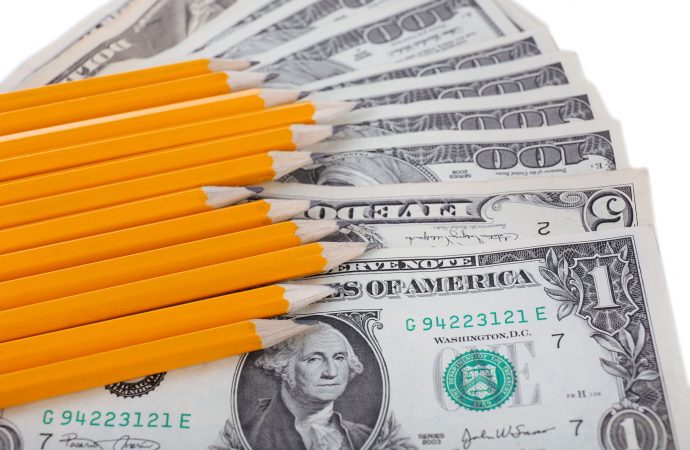 When Governor Kelly signed the school funding bill in 2019, she knew it would create large budget deficits within two years.  One highly placed source asked her what she would do if the state ran short of money, and she replied, “Well if we can’t afford it, I’ll just tell the court we can’t afford it.”

When the COVID situation made the situation exponentially worse, even one of her staunchest allies, Senator Anthony Hensley, said, “I don’t know if she has any choice but to cut funding for K-12 education.”

But facing at least a $653 million budget deficit next year, Governor Kelly says she’ll balance the budget by delaying loan payments, deferring $77 million in school funding to the next year, and by using a few other accounting gimmicks.

She could have stopped the $120 million funding increase in the budget for next year.  Educators would call that a ‘cut’ but it would only hold funding steady.  KSDE estimated schools will spend about $15,000 per pupil this year before they shut down early, and adjusted for the cost of living, Kansas schools already had the 15th highest per-pupil spending in the nation back in 2018.

She could have saved taxpayers about $300 million by reducing state aid for districts that have excess carryover cash and letting them use unspent aid from prior years that’s sitting in the bank.

District operating cash reserves increased from $468 million in 2005 to $962 million last year, and most of the increase represents state and local taxes received but not spent.  School officials aren’t bashful about saying they don’t have enough money, but they didn’t complain when they had $468 million in the bank in 2005.  So any district that has increased the percentage of cash to expenses held should be able to operate at those levels again. 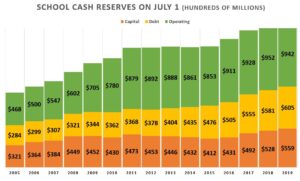 The median ratio of operating cash to operating spending has risen from 9.7% for the 2006 school year to 17.8% for the 2019 school year, and it could be higher this year.  Schools got all of their funding but missing two months of on-campus activities will probably lead to higher cash reserves.

These two options are just the beginning of a long list of opportunities to operate schools more efficiently.

Governor Kelly showed her disdain for taxpayers last month when she vetoed property tax reform at the behest of city and county officials, and yesterday’s budget-balancing gimmicks won’t be the last time.

Deferring loan payments and other spending just pushes deficits into the following fiscal year and sets taxpayers up for another big tax hike down the road…just as we predicted last year.