The first Kansas legislative session has passed. To finance a record-setting budget, Governor Kelly has consented to both an income tax and sales tax increase. However, the latest information from the Kansas Division of the Budget says it’s not enough. The government is in a hole; for every dollar Kansas deficit spends, another dollar families go without.

The state government is probably aware of the impending budget hole their record-setting spending creates. Over the 2019 legislative session, Governor Kelly twice-vetoed measures to return incidental tax revenue to Kansans. These vetoes technically became a tax increase to the tune of $65 million. Afterward,  the Kansas Department of Revenue (KDOR) unilaterally enforced sales tax collections from out of state businesses, particularly small firms. Kansas Attorney General Derek Schmidt, based on the Wayfair decision, believes such administrative action comes with little authority and invites lawsuits. Yet, KDOR intends to pocket tens of millions of dollars from the confusion of the business community. Despite these two non-legislatively approved tax increases, the fiscal gap does not close. Now, the Governor has created a tax council, with a charge to close the shortfall with the smallest tax increase possible. 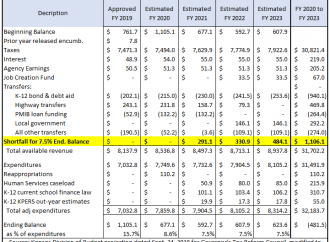 To that end, the Budget department provided a snapshot of the state budget.  We modified their projection to comply with state law requiring an ending balance of at least 7.5%, which shows legislators and Governor Kelly must cut spending or tax an extra $1.1 billion by 2023. Also, that $1.1 billion shortfall assumes roughly $470 million is also siphoned from the state highway fund.

Some say that despite a large deficit, Kansas is rebuilding economic growth. However, the unchecked spending and impending shortfall have done little to turn around Kansas’s economic performance. Now, signs show it’s getting worse. In the fourth quarter of 2018, Kansas personal income growth was the 16th fastest in the country. By the next quarter, Kansas personal income growth was the 36th fastest. Now in the most recent quarter available, Kansans’ personal income is ranked the 43rd fastest in the country.  Such plummeting performance in income comes at a time where fleeing Kansans are creating U-haul shortages, and Kansas is the 10th least tax-friendly state in the nation.

Despite the spending, the Kansas economy hasn’t improved relative to other states. There are also more Kansans going than coming. Another tax increase dissuades new businesses from settling here and further amplifies our population decline. So if nothing changes by 2023, higher taxes are all-but-certain.