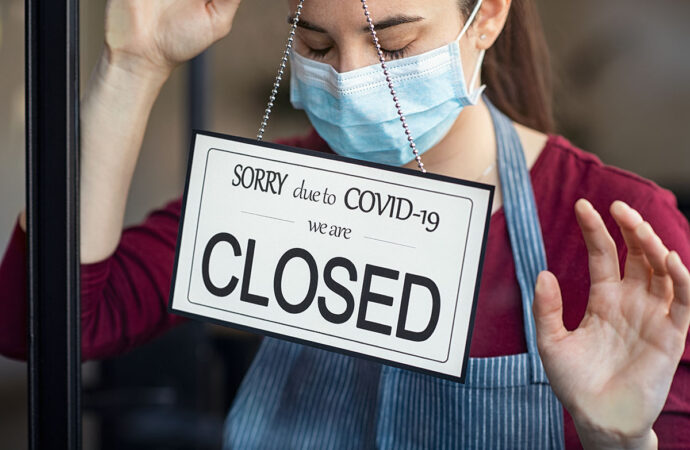 As a recap, the monthly jobs reported from the Kansas Labor Department and most media outlets are not the true count of jobs in Kansas. They are, in fact, an estimate, a prediction of what the Kansas Department of Labor (KDOL) thinks businesses will report from their Multiple Worksite Report (MWR). When enough MWRs come in, the federal Bureau of Labor Statistics will revise the job predictions to match.

The chart below compares KDOL’s preliminary jobs report (blue) with the finalized count of jobs from Kansas businesses (orange). For example, in April 2020, the media and KDOL reported that Kansas lost an estimated 11% of private jobs. However, when actual business’ employee & wage reports came in, the April contraction was a 12.4% decline. Taken all together, this means instead of initial reports, Kansas lost 45,650 private jobs from 2019 to 2020, Kansas lost 56,800. That is roughly 10,000 fewer private jobs than initial reports. It strongly suggests the Kansas lockdown had a higher economic cost than expected. 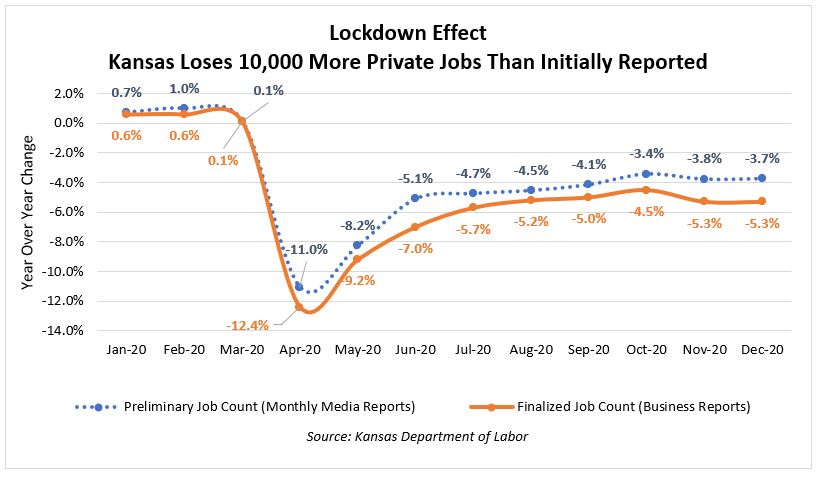 We can observe the devastating effects of the on the chart below.  2019 was already the 3rd slowest job gain over the past decade. It resulted from another government intervention, the biggest tax increase in state history. Meaning that Kansas’ economy was struggling before COVID landed on our shores. Today, eight years of private job growth have disappeared. Kansas has only recovered 62% of the jobs lost from the April 2020 lockdown, with no clear timeframe for a full recovery. 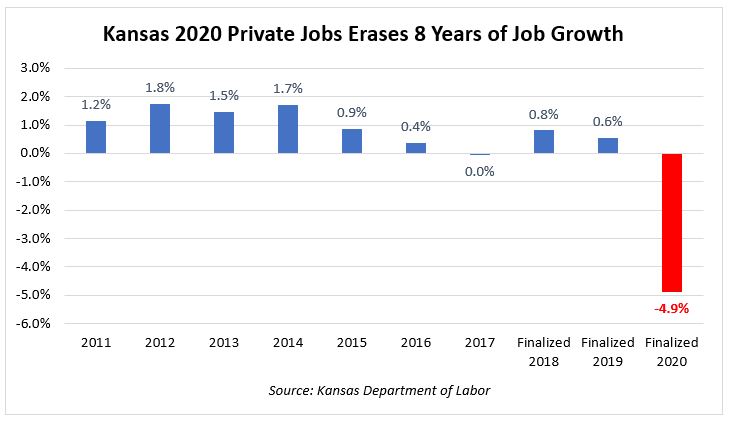 Supporters of continued lockdowns will say this economic downturn stems from the virus itself, but that isn’t the whole truth. Such an argument thinks if the Governor did not tell a Kansas business to close, the pandemic would have done so regardless. That is like saying that a household cutting their budget by 25% and a government official doing it for them would result in the same decisions. It’s like the government telling you to buy over-the-counter medicine to save money. However, you realize buying store-brand cereal can save the same amount. The result may appear the same on paper, but the impact on your family is significant. The same is true of business decisions in the face of the supply chain or service disruptions during the pandemic and one-size-fits-none health orders.

Roughly 130,000 private jobs disappeared last year. In Kansas, businesses shed jobs of their own accord but rather by political decision-makers. Kansas likely saw a much sharper drop in employment. It will also be slower to recover from it. The difference between layoff and lockdown is an important distinction. Moreover, that distinction has effects that do not go away with a legislative promise never to do it again.

Government policy that raises taxes discourages work and then arbitrarily chooses which livelihoods should end is not a growth framework. Additionally, the government’s inability to handle other tradeoffs such as unemployment fraud and the massive demand for relief proves government shouldn’t pursue such action again. Economic planning has consequences, and it comes at the expense of Kansan families and businesses.