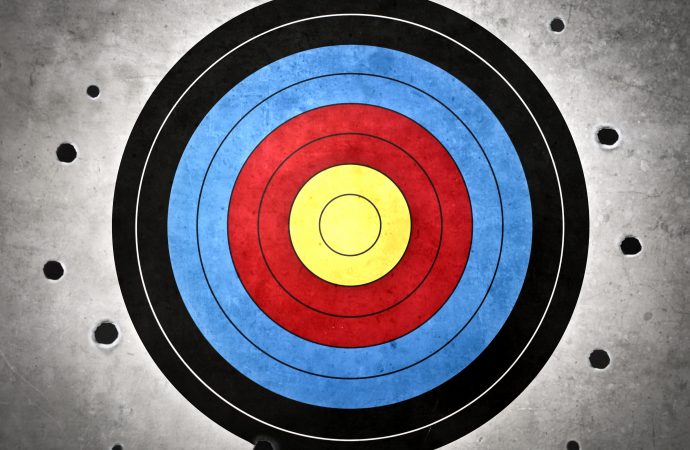 When it comes to making predictions, they say that the only good thing about economic forecasters is that they make the TV weathermen look good. Kansas’s economic and tax revenue forecasters, known as the Consensus Revenue Estimating Group or CRE are no different, and they have a history of missing their estimates. As a result, these misleading estimates set the initial budget, becoming a factor in record state spending.

In April 2019, representatives from the Governor Budget Office, Legislative Research and economists from KU, K-State and Wichita State met to forecast state tax collections. They meet twice a year to predict economic conditions and subsequently, state tax revenues. Whether it is before significant tax policy changes or after, the CRE guesses are rarely within 2% of actual tax revenue.

Perhaps it is easy to see why. The table below highlights CRE’s guess on personal income. This economic indicator is the basis for estimating both individual income tax and sales tax revenues. At their November 2016 meeting, the CRE guessed 2017 tax revenues. That guess came from a belief income would be 3.9% higher than in 2016. When the CRE met in April 2017, they predicted personal income would grow 4%. By November that year, expectations dropped dramatically to 1.5%. Ultimately, the actual personal income growth ended up being lower still, at 1%. Move to the 2018 column, and the CRE started the inaccurate estimation all over again. 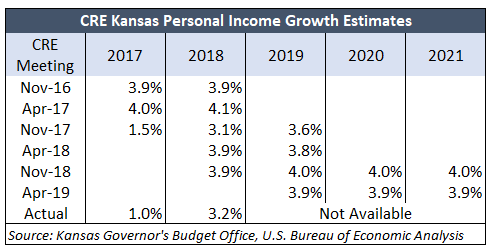 Clarifying the point, forecasting economic conditions is hard under the best of circumstances. As the CRE gets closer to the period they are estimating, their forecast should be more accurate, and it shows. Their November 2018 guess of 3.9%, is much closer to the mark than their prediction made in April 2017. The downside is the legislature sets the budget from the first predictions and rarely adjusts accordingly. November 2016’s estimated tax revenue, stemming from a rosy guess of a 3.9% personal income growth, is the basis of the 2018 budget. The legislature didn’t pull back taxes and spending once it was realized actual personal income grew 1% and the CRE overestimated. Thanks in part to the CRE and the inability to adjust the budget, fiscal year 2019 is now the most massive budget in state history.

CRE only lowered their estimates on sales tax receipts, the only primary tax stream with no policy changes.  Sales tax and state economic performance are connected. Like a rising tide, if the economy improves, then so will revenue from these tax sources. CRE’s methodology indicates that changes in personal income predict a shift in sales tax. The April 2019 CRE dropped personal income growth 0.1 percentage points. That lead to a $15 million downgrade for sales tax revenues this year, and a $25 million decline in 2020.

In the latest tax revenue report, Kansas gained $400 million more than the same time last year. Most Kansas media didn’t report the context surrounding the gain, suggesting the improvement in coffers is a good sign. However, the fact is that 97% of the $400 million increase comes from hiked taxes. Yet that is absent in media reports. Kansas individual income taxes rose for three straight years. Kansas corporate income taxes are higher due to federal tax reform expanding the definition of taxable income. Finally, both individual and corporate income taxes rose due to the Governor’s veto of the federal tax windfall, the “found wallet” we’ve mentioned before.

Remove the tax hikes of income taxes, and the 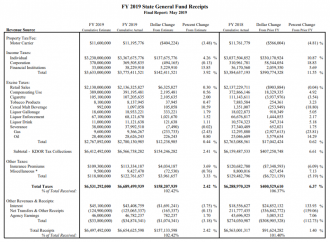 re isn’t much to celebrate about the state’s revenue snapshot. Though sales tax is finally above expectations, it is still well below the growth in prices of 1.7%. With sales tax collections ticking slightly downward, Kansans aren’t buying as many goods and services as last year. Prices have grown faster than what Kansans are willing to spend. Couple this with recent tax increases and Kansas has a problem. The CRE’s far rosier Kansas economic expectations are partly to blame for spending hitting a new record level.  Kansas continues a four-decade trend of economic stagnation with a looming 1.4-billion-dollar tax increase. The sooner state officials approach our economic challenges with sound policy, the sooner we change the trajectory of our Kansas economy.