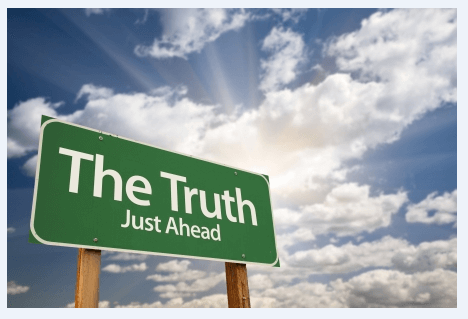 Those saying the current trajectory of state spending won’t lead to a deficit or tax increase aren’t being honest. A new profile prepared by the Kansas Legislative Research Department (KLRD) shows the state budget creates a $1.4 billion deficit over the next four years. This happens regardless of Governor Kelly’s veto of the tax windfall bill.

Another way to look at the state budget is through a profile that accurately reflects reality. Most Kansas media reports on the budget don’t include the fact that state law must maintain a 7.5% ending balance. The table below breaks down the Kansas budget into three key parts. The incoming revenues, the outgoing expenditures, and the additional revenue needed to maintain a statutorily required 7.5% ending balance. Starting this July (FY 2020) to July of 2023 (FY 2023), the amount of money needed to balance the budget in accordance with state law grows; Couple this with the state’s record spending levels, and it’s easy to realize the issue is not tax policy. The issue is record deficit spending that far eclipses inflation while ignoring state law. 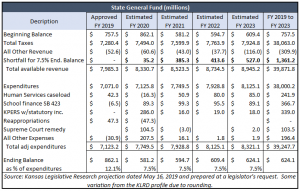 If the Kansas legislature can’t control spending, a billion-dollar tax increase in the next 4 years is inevitable; federal windfall or not. Per the chart below, since the record tax increase of 2017, state general fund spending is set to be nearly $3 billion higher than inflation by 2023. Four decades of stagnating economic growth means Kansas is unlikely to grow its way out of this problem.  Tax increases are all but inevitable. 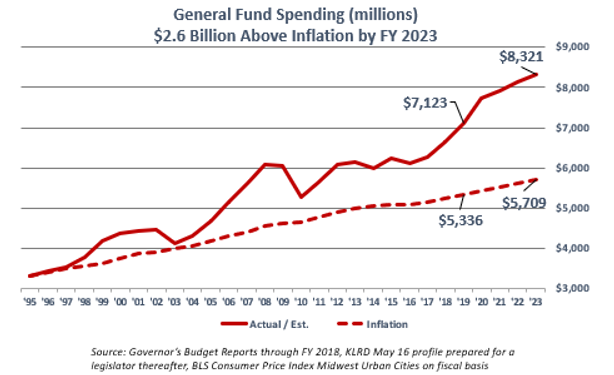 Instead, Governor Kelly vetoed the federal tax windfall bill for a second time, denying Kansans 100% relief from federal tax reform. This was her reasoning,

It will decimate the state’s ability to pay our bills and invest in our people. Just as Kansas begins to stabilize after years of senseless fiscal crisis, House Bill 2033 will create a $1 billion deficit within three years.

Such a statement ignores the reality that explosive state spending is becoming a problem. Solutions and methods to pare down government inefficiencies are out there. Some, like creating a sunset commission, receive little attention during the legislative session. Some the Kansas legislature has already passed, such as Performance-Based Budgeting, remain on the shelf and largely unused. Policymakers must ensure core government services at the best price (tax) to taxpayers.

Famed economist Thomas Sowell once uttered, “When you want to help people, you tell them the truth”. Kansas politicians owe it to the people to tell them the fiscal picture as plainly as possible. Anything otherwise suggests the government is more willing to advance its own interests instead of Kansans.