Scare tactics and false choices: just another Tuesday at KCEG

The Kansas Center for Economic Growth (KCEG) put out a February 16 blog post on state revenue that basically yells ‘fire’ in a crowded theater while obfuscating a clear path to an easy exit.  KCEG Executive Director Annie McKay says General Fund revenue cannot reasonably meet expectations for the remainder of the year, so legislators should reinstate income tax on pass-through business income – as if that is the only option. Ms. McKay shows the average monthly collections needed over the last five months of this year are higher than in the past; she says it is ‘improbable’ that revenue targets can be met and then rushes to push the false choice that higher taxes are the solution.

To be clear, hitting the revenue targets this year won’t likely be easy, but an examination of the underlying 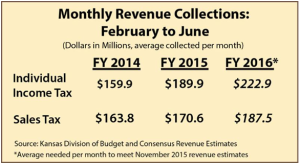 data puts the task in better perspective.  A 17.3 percent increase in individual income tax receipts is certainly large, but it is slightly less than the actual increase that occurred a year ago.  The second half of the fiscal period has been rather unpredictable over the last few years.  There have been some

large swings in refunds paid out (which are deducted from receipts) and the second half of last year was punctuated by large gains and losses compared to the previous year, so the remainder of this year’s performance against revenue estimates could be a roller-coaster ride.

Average monthly sales tax revenue must be 9.9 percent higher than last year but Ms. McKay fails to mention that the tax rate is 5.7 percent higher this year (6.5 percent vs. 6.15 percent), so real tax growth must only be 4.2 percent – exactly what it was a year ago.  The real growth rate needed is greater than has occurred so far this year (about 2 percent) but the potential shortfall is much less than she portrayed.

But even if revenue does come in short of estimates, Ms. McKay’s rush to increase taxes is neither the practical nor necessary solution.  Impacting this year’s budget would not only require a retroactive tax increase, there is no way of knowing how much might produce before the June 30 close of this fiscal year.  Tax-and-spend aficionados like Ms. McKay push
reinstatement of tax on business pass-through income on fairness grounds but they recoil at the prospect of going after the original tax-exempt class – government pensioners.[i]   A tax increase on business will also negatively impact economic growth going forward.

Tax increases are simply not necessary.  Any corrective measures needed should be focused on the real problem, which continues to be inefficient spending.  Ms. McKay advances the false choice that Kansas cannot be a state with no income tax because it lacks ‘advantages’ like Florida’s tourism or Texas’ oil and gas but again, the data disproves her contention.

The amount of taxation needed to provide necessary services is simply driven by the amount each state chooses to spend on those services. 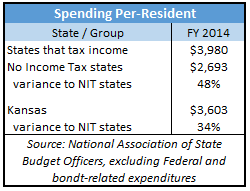 They find ways to fund education, highways, social services and other functions at better prices, and citizens must find good value in those services; collectively, the states without an income tax enjoy positive net migration of U.S. residents leaving states that have an income tax.

Should revenues not meet expectations for the remainder of the year, legislators should continue seeking cost reduction opportunities to close any gaps, such as exist the recently-unveiled Alvarez and Marsal efficiency study that recommends $2 billion worth of savings over a five-year period.

Scare tactics and false choices have no place in policy discussions but that’s just another Tuesday for KCEG.  This isn’t the first, second or even third time they’ve misrepresented the facts…and probably won’t be the last.

[i] State and local government employees do pay income tax on their personal contributions but pension payments largely funded with taxpayer money have not been subject to state income tax for decades.  Government retirees’ tax benefit from this special exemption was last estimated to be $52.5 million annually.