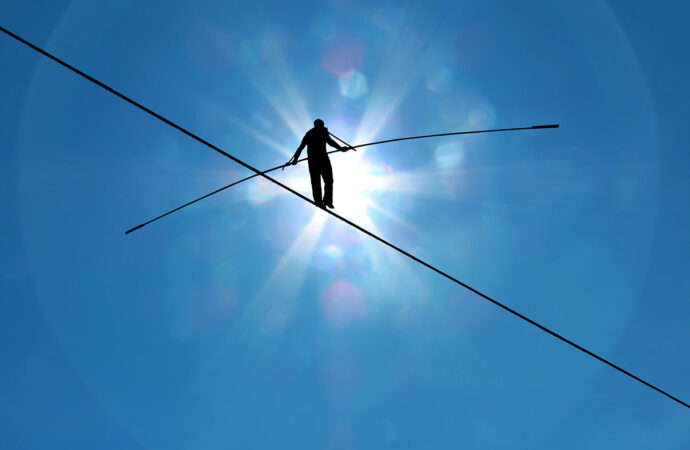 Imagine the Kansas budget as a tightrope walker, with taxing and spending on opposite sides of their balancing rod. If the government spends significantly more than it taxes, this leads to deficits and  “bust-type” budgeting. Likewise, if the government collects more in taxes than it spends, you end up taking more from taxpayers and get a “boom” in budgeting.  The state should try to stay balanced to avoid the boom-and-bust cycle of government spending. External factors are like the tightrope wire itself. Balancing means nothing if something runs amok and will cause the walker to fall all the same. But how does Kansas account for the multitude of factors affecting its budget over time? While, at the same time, having a tax rate that creates more economic opportunity for Kansas families.

As of 2020, Kansas had no form of a spending or revenue limit. Considering the recent history of ”boom and bust” since the Sebelius years and now a $758 million budget surplus, legislators should make it a priority to support a balanced budget. The current budget surplus also provides wiggle room for implementing changes to the budgeting process in the near term and creating long-term fiscal sustainability.

One opportunity for change is instituting tax and expenditure limits. Commonly initialized as TELs, tax and expenditure limits restrict the growth and spending of local and state governments based on measures such as population or inflation. The rates could either be capped at a fixed level, or the growth rate of spending and revenue intake could be limited by a formula. Depending on how stringent the legislation, or constitutional change, is, it could slow the growth of a state budget by between .75 to 1.11%. For context, Kansas’ general fund spending increased by 4.56% between FY 2020 and 2021. The below graph depicts the difference between actual spending growth and if spending was limited by inflation since 2010. 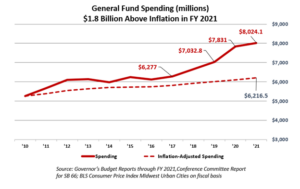 On average, states with TELs implemented have higher gross state product growth, personal income growth, and population growth. Colorado’s Taxpayer Bill of Rights (TABOR) is the only TEL to be implemented as part of a state’s constitution. As a result, TABOR returned $3.3 billion to taxpayers over a decade. In one decade TABOR was active, private job growth in Colorado was 37.8%, but shrunk to 4.5% the next when it was inactive. Today, TABOR is still active, but policymakers should be aware of the ability to circumvent a TEL through different spending procedures. For instance, a study by University of Missouri professors found that stricter TEL laws were associated with local level governments receiving more state aid or diversifying their revenue sources to circumvent a TEL.

Let’s say that a TEL is established in Kansas, and the revenues do not grow as fast as we’d hope, and this creates issues in the budgeting forecast process. For this purpose, it’s good for the state to have a rainy-day fund in case revenue receipts drop below a certain amount. Since 2016, Kansas has had one of these statutory funds, however, is ranked dead last in the country in Rainy Day Fund health according to the Tax Foundation because the state hasn’t put a single dollar into this fund. This fund should be specifically set aside for accounting for deficits and no other purposes.

The idea of a TEL isn’t new to Kansas: just last session, HCR 5010 was proposed which would limit the growth of spending by the inflation rate. Not to say the HCR 5010 is perfect but it suggests the idea is already a topic of conversation in Topeka. TELs would fit well with Kansas’ recent success with SB 13, or the Truth and Taxation legislation, which required more public consideration regarding property tax increases. At the end of the day, taxpayers are the people who must catch the government tightrope walker when it falls. It’s unfair to make taxpayers foot the bill when the government isn’t responsible for its budgeting. It’s like going out to lunch on a friend’s tab and ordering the most expensive dish in the restaurant…three times over. The government has an obligation to maintain a balanced budget to create a stable environment for its citizens.