Time’s Not Yet Up for More Kansan Tax Relief

During the last weeks of the Kansas legislature, many policies were moved from their original bills to other pieces of legislation – an annual occurrence. Kansans can expect to see some tax relief, but legislators should consider more ambitious reforms to stay competitive with other states.

Highlighted provisions of the passed HB 2239 and HB 2597, which awaits the legislature’s return in late May, appear within the table on the right. But, as with most bills, the tax policies here range from good to bad. This piece focuses solely on some of the biggest implications for most Kansas taxpayers and not concerning provisions in other areas of tax law.

The long-awaited “trailer bill” to the state’s Truth in Taxation laws – specifically, more public notification requirements for governments when a tax hike is being considered – was moved from HB 2597 to HB 2239. The provisions of HB 2239 will become effective on July 1, 2022.

HB 2597 still contains an expanded income tax exemption for people on Social Security, increasing by $5,000 annually until the income tax itself is phased out. Similarly, there’s a new subtraction modification that would exempt up to $2,000 of retirement plan income for single filers as well. Kansas is ranked as the 3rd worst state for retirees according to Kiplinger’s because private retirement plans and out-of-state pensions are all fully taxed. These policies are moves in the right direction, but the retirement taxes are still a high, unfair burden that pushes retirees out of Kansas and to other states.

Increased standard deductions were something originally in HB 2239 but didn’t end up in the final bill. Instead, HB 2597 enacted indexing of standard deductions to inflation, which is still a good change, but less direct tax relief for everyday Kansans. HB 2597 also allows businesses to claim carried back losses, an employment credit disallowance exemption, an exemption from sales taxes on utilities, and property tax relief based on whether a business was shut down due to quarantine.

The fiscal note on the Conference Committee Report Brief for HB 2597 shows General Fund revenue would be reduced by $174 million in FY 2023.  Ironically, April revenues came in $175 million above the estimate, so the first year’s cost is already covered. 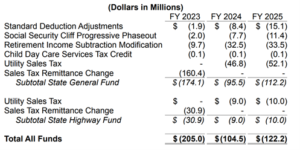 2239 passed with the important measure of SALT Parity  – which means that pass-through entities can elect to pay state income tax at the entity level and then claim a deduction at the federal level for state and local taxes paid. The Treasury Department and IRS have endorsed SALT Parity reforms as a means to resolve tax deduction cap issues from the 2017 Tax Cuts and Jobs Act. All of these policies are good stepping stones for businesses still trying to find their footing in a rapidly changing economy due to inflation.

What’s Next for Tax Relief?

Meanwhile, over the past year, Iowa, Indiana, Arizona, and Mississippi have all enacted sweeping income tax reforms by going to a lower flat rate with the goal of eliminating the income tax in the future. According to KPI’s Green Book, states that do not tax income have higher job growth, wage increases, GDP growth, and domestic immigration compared to states that don’t. While eliminating the income tax is an ambitious goal that would require long-term spending adjustments, something like universal rate reductions could put more money in Kansas families’ pockets.

There’s still time at the legislature’s return at the end of May for the return of standard deduction increases or more tax reform. Legislators from both sides of the aisle have expressed interest in more tax relief before the end of the session. With an ever-growing cash pile from tax money, the opportunity is now for pro-growth tax relief to lessen Kansas’s burdens on families and businesses.