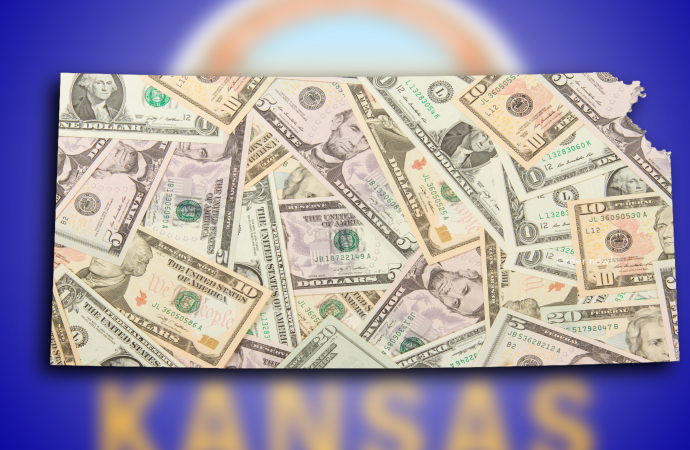 Kansas Governor Laura Kelly has proposed a $250 tax rebate for every taxpayer in Kansas next year. The $455 million price tag on this policy is proposed to be paid for using an anticipated $2.9 billion tax surplus by June of 2022. While one-time election-year rebates are a form of tax relief,  taxpayers are far better off with permanent rate cuts.

The place to help Kansans save some cash is with the income tax.  Kansas also has a high sales tax rate, but taxes on productivity are proven to be the most harmful to people and economic growth.  The Tax Foundation says a landmark study by economists at the Organization for Economic Cooperation and Development (OECD). Personal income taxes were found to be second-most harmful to growth.  A reduction in the corporate income tax also benefits individuals, as the Tax Foundation says studies show that workers bear the brunt of corporate taxes through reduced wages.

For the sake of simplicity and to show how individuals are better off with rate reductions than election-year rebates, let’s look at small changes in marginal income tax rates as an example. 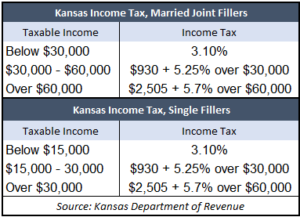 Kansas has a top marginal income tax rate of 5.70%, which ranks middle-of-the-pack compared to states across the nation. Imagine a married couple of a teacher and a police officer with two children whose combined income is $100,000. If they file jointly and take the standard deduction, they would be paying $3,816 on taxable income of $83,000.

Of course, rate reductions can initially be paid for with budget surpluses but spending must be brought under control for tax relief to be sustainable (as KPI proposed during the Brownback tax cut years). Gov. 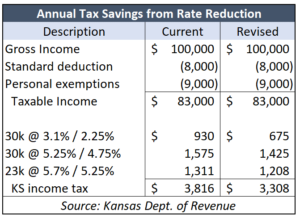 Kelly’s proposal, at least as discussed so far, does nothing to control spending long-term nor does it constrain long-term excess tax collections. If her goal is really to help Kansas families, she would work to trim spending to provide long-term relief.

At the same time, Kansas has uncompetitive, high tax rates on most businesses.  In fact, the Tax Foundation says Kansas has the highest effective tax rate in the nation on mature businesses overall. Specifically, mature research and development, data, shared services, and manufacturing firms face the highest effective tax rate in the nation. This could explain why a large business like Cerner recently moved its campus across State Line to Missouri, despite receiving large subsidies to build their campus. In Governor Kelly’s rebates proposal, C-Corporations receive no relief. This isn’t strong help for Kansas businesses that have lost significant economic amounts over the pandemic.

Keeping firms in Kansas means lowering effective tax rates on all businesses. This can be partially paid for by eliminatin 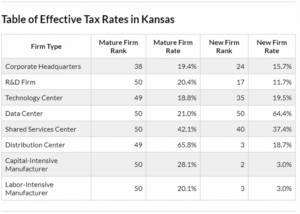 g subsidies across the state which haven’t produced economic growth different from what normally would occur in the market. Cities like Miami have seen massive business growth in new industries like digital finance and cryptocurrency from competitive tax rates and general enthusiasm towards drawing businesses into the state.

Democrats and Republicans should avoid one-time promises in an election year and instead prioritize long-term relief instead of temporary rebates. Policies like performance-based budgeting and tax and expenditure limits help control and guide spending and taxing habits. According to the Tax Foundation’s recently released 2022 State Tax Climate Index, Kansas is ranked #24 nationwide for the best business tax climate. Finding ways to slow down the growth of spending and thus reduce taxation would make Kansas a more appealing state for economic development in the future. The Kansas government shouldn’t lose sight of long-term relief while chasing short-term policies.