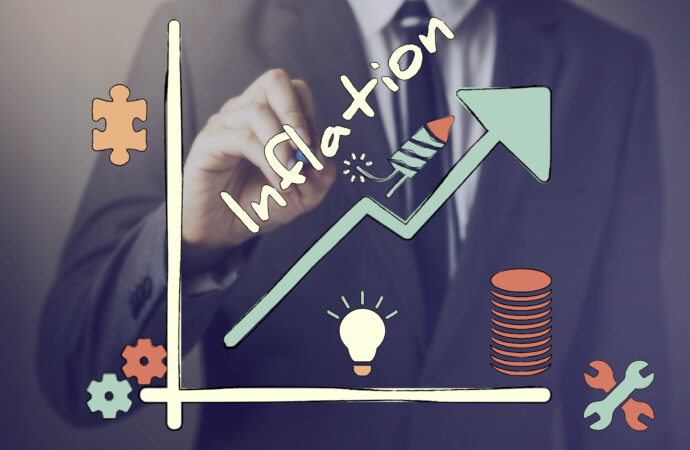 Whether at the gas pump or grocery store, Kansans are feeling the effects of high inflation. Prices in the region are about 7.9% higher than they were a year ago – the highest inflation the region has seen since at least the 1980s. What’s causing this inflation though and what policies, if any, could be done to fix it? Can this be done at the state level at all?

The answer is two-fold:

Suppliers have had difficulty providing goods during the COVID-19 pandemic. This ranges from business closures to workers leaving the labor force or not looking for work all of which results in shortages and various other limitations that exist to pre-pandemic business interactions. This has resulted in the news headlines’ “supply chain crisis” because goods and services are struggling to be produced and delivered to consumers. From an economic perspective, supply is constrained. It is not uncommon to visit a restaurant with open tables but still have a wait. There just isn’t enough help to run at close to max capacity. Or, drive around town and see how many “help wanted” signs you see.

The CARES Act was passed in March of 2020 and devoted $1 billion to Kansas state and local governments. That’s been followed up by additional ARPA funds in December 2020, whose full funding will come in May of this year. ARPA included $1.6 billion for the state, $100 million for Sedgwick County, $72 million for the City of Wichita, and hundreds of millions more for other counties and cities in the state. This isn’t mentioning the billions more in stimulus checks and other cash transfers sent to Kansans across the state. On top of that, various other federal funds such as the $1 trillion infrastructure bill have the potential to send millions more to Kansas.

The result of these two things is an economy with a lot of money to spend, but a backlog in the goods and services upon which to spend it. As a result, high inflation has arrived.

The supply chain issues aren’t going anywhere soon, and inflation isn’t something that the Kansas government can solve on its own. So why talk about it? Because the national crisis is an example of the consequences of large government spending and how it can create unexpected burdens and even increase the cost of living.

Consider Kansas – which has the 3rd highest ratio of general-purpose governments and the 2nd highest ratio of state and local government employees to population. To support this government apparatus we have some of the highest property taxes in the country and rank 19th in highest tax collections per capita – according to information found in KPI’s Green Book. 21st-century businesses like data centers have the highest mature tax rate in Kansas compared to other states, and rural businesses and properties have list-topping high rates as well.

Spending and taxation are two sides of the same coin: to spend more requires taxing more…since Kansas cannot run up debt like they can in Washington, DC.

Even something with the best of intentions – the initial COVID “relief” – can have far-ranging and unexpected consequences. Also, what seemed like a good idea at the time – government payments to the “takings” of government shutdowns – must now be unraveled. This is like Kansas’ governmental sector. In short, much of the Kansas government is a legacy from a previous era when the population was more evenly spread across the state.

This is a predicament state and local governments can resolve with more efficient spending. For instance, Kansas counties whose populations were between 6,000 to 10,000 people in 2018 varied in their per-resident spending from a high of $3,038.58 to a low of $949.97 with an average of around $1,402.61. Despite these counties being roughly the same size, there were some spending more than triple per resident to provide the same basket of services. Policies are as simple as auditing discretionary expenditures, not replacing employees who retire or otherwise leave, and continually evaluating the size and scope of programs relative to cost and population.

Controlling the cost of living because of policy is a duty of responsible government – be it the White House, Topeka, or your local city hall. Keeping costs low allow Kansans to spend their money and flourish.