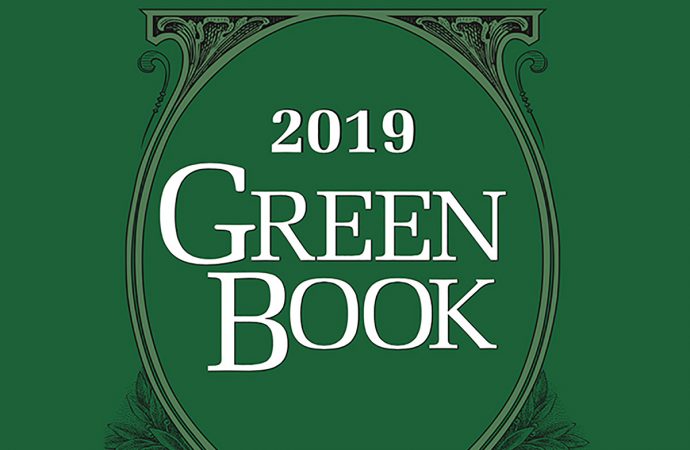 Some of Kansas’s low economic performance may be tied to the fact that property taxes are growing too fast. In fact, 65 KS counties saw triple-digit property tax growth despite their populations shrinking. The Lincoln Land Institute found that Iola, KS has the highest rural property tax rate in the nation. By contrast, there is a consistent finding that higher economic performance follows lower taxes. KPI’s 2019 Green Book – an annual publication since 2014 – shows this fact with spending and tax information for cities, counties, and states across the country.

Whether it’s jobs, wages, migration, or overall economic performance, Kansas sits in the bottom half to bottom third of growth in all 50 states. States that take fewer resources from families and businesses tend to see stronger private growth than Kansas. These same low burden states also perform markedly better than states with the highest tax burden. While it is likely other lurking variables may explain these economic performance rankings, tax policy plays a leading role in economic outcomes. Plus, tax policy is directly within the scope of government; and so if lower tax policy assists growth, then why not pursue it?

When it comes to state spending, it should be no surprise that state governments that tax less, also spend less. The table below outlines the burden Kansas and similar state governments place on their taxpayers. In welcome news Kansas spends less per resident than the national average and most of its economic peers. Yet, Kansas is filled to the brim with government employees and agencies. Kansas has the 3rd highest number of state and local government workers per capita, leaving only two states with more state & local government workers per resident. Kansas is also the 3rd lowest number of residents per general purpose government unit. 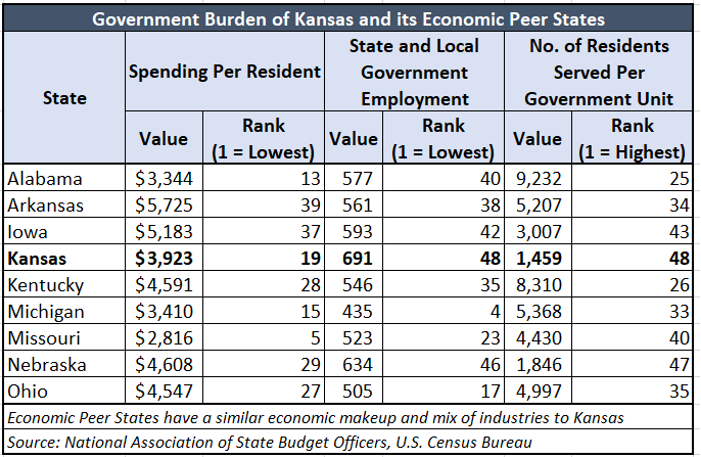 Why is this a problem? Too many government jobs hurt private sector job growth. Private job growth slows, as the number of potential applicants to fill them shrinks as government jobs grow. Employers must bid against their own tax dollars to compete for qualified job applicants. In addition, too many government jobs increase the chance duplicative services are being provided. There shouldn’t be government services competing against individuals while private organizations are supplying the same thing. Kansas government may be inefficient, as there is one Kansas governmental unit for every 1,400 Kansans. Therefore, should a state with 3 million residents have nearly the most government employees in the country? Should a state with 3 million residents have roughly 2,000 governmental units? The answer is “No”.

Slowing private sector growth and growing government are perhaps two drivers of a disturbing trend noticed throughout Kansas; rising property taxes. Many local governments aren’t seeing a natural growth in tax revenues with a slow growing economy. If policymakers are committed to large numbers of staff and agencies, then property tax rates will rise. Here’s what we noted in the 2019 Green Book.

The 2019 Green Book should stand as a wake-up call for Kansans about the failing health of our state’s economy. The Kansas economy is slowing, and, in its place, government is growing. No one wants a society where individual well-being and economic opportunity are undermined by an ever-expanding public sector. Governments throughout Kansas should follow the private sector, not lead it. Government must enter the 21st century. It’s growth shouldn’t swamp business and families.  KPI’s 2019 Green Book is a tool to help government grow the economy through private sector jobs, higher wages, and a smaller out-migration. We shouldn’t have to settle for mediocrity.