July 2021 Job Numbers: Some Private Growth with Room for Improvement 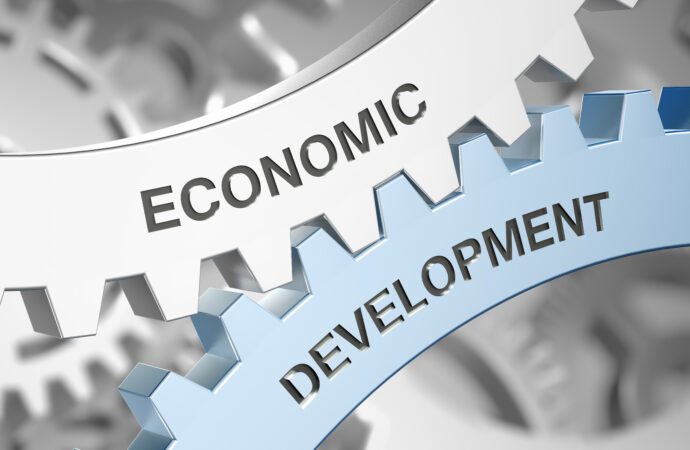 The Bureau of Labor Statistics’ July 2021 job numbers are good news for Kansas’ COVID-19 recovery and economic growth. Over the past month, the state added just under 6,000 new private jobs. If it continues at this same positive growth rate, the state is expected to return to its January 2020 amount of private-sector jobs by November 2022. As a percentage of jobs, this growth from June is on par with similar patterns in Missouri, Nebraska, and Colorado. Kansas’ growth is better than Oklahoma’s growth, but somewhat behind Iowa’s July growth. 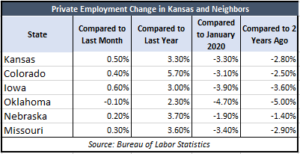 Some of this economic success likely derives from new tax policies that were passed over Governor Laura Kelly’s veto earlier this year. These reforms moved Kansas up from 35th to 24th on the Tax Foundation’s State Business Tax Climate Index. Important changes include a sales tax collection harbor for small remote sellers and marketplace facilitators, excluding global intangible low-taxed income in a manner our neighbors have already adopted and allowing taxpayers to fully see the effects of the 2017 federal tax cuts by granting itemized deductions on state individual income taxes and other optimizations with federal tax policy.

Another potential reason for these new jobs is the phasing out of the $300 federal unemployment benefit in Kansas on September 6th as more people go out to find work. While other funds may be used to pay unemployment benefits past this date this big deadline is likely driving some behavior. If the state of Kansas were to extend these benefits, they should take an approach more like our successful neighbor Colorado and as well as the benefit ending states of Arizona and Montana. Instead of providing the benefits as a weekly check, the state could provide the funds as a signing bonus to employees after receiving a job. This would be more effective in setting employees up for long-term employment through the end of the COVID-19 pandemic and afterward. Options such as work-sharing benefits could be effective as well.

Commitment to private-sector job growth and healthy business operations in the state are steps in the right direction. Unfortunately, recent economic conditions across the state resulted in a 6% drop in Kansas’ population as citizens moved to healthier tax environments through domestic migration. According to the Lincoln Institute of Land Policy’s definition of a rural area, Kansas has the sixth-highest effective property tax rate across the country. This money is going to pay the state’s 692.5 government employees for every 10,000 residents, which is the 3rd highest ratio of the 50 states.

These job numbers are good news but aren’t the stopping point for potential policies to spur growth. Regulatory sandboxes contributed to Utah’s continued position as the fastest growing economy in the country, and could very well promote business development and entrepreneurship here. Instead of spending money on STAR bonds which have re-directed economic growth instead of promoting it, Kansas could spend taxpayer money on large infrastructure projects or public education to support the creation of new businesses from the outside. Picking winners through the economy doesn’t work for sustained growth. Creating a fair and open playing field for business does.