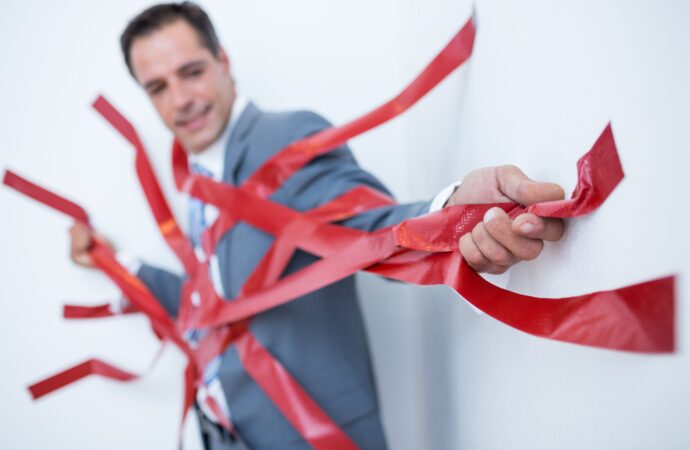 Kansas’ 72,645 regulatory restrictions consist of 3.3 million words, which would take the average person 185 hours to read completely. The Mercatus Center’s new study Cutting Red Tape in Kansas: A Menu of Options outlines Kansas’ current position as a regulatory environment and what new directions the state could take to being an even more competitive state economically. By number of regulations, Kansas is the 8th least regulated state in the nation. However, on a per capita basis, Kansas’ 24.9 regulations per person is above the national average of 19.6.

The first step Kansas should take is changing its perspective on how regulatory reform should work. This involves viewing reform as preventing the broad picture of regulatory accumulation rather than picking apart each individual regulation. Between 1975 and 2011, the number of pages in the Federal Code of Regulations increased by 138%. Between 1949 and 2005, federal regulation was estimated to lower the growth rate of the US economy by 2 percentage points annually. That means our economy today would be $39 trillion more if the regulation stayed at its 1949 levels. Because of the strong relationship between GDP and societal welfare, this would equate to more products, more technology, more wealth for people, and overall, a higher standard of living for people. The most significant reforms come from re-evaluating how the state and its assorted offices view evaluate, keep, change, or eliminate regulations as a process versus targeting one specific agency and trying to cut away or change regulations.

Kansas could create new offices and positions dedicated to evaluating regulations and reducing overlap or ineffective policies. Under Governor Brownback, an “Office of Repealer” briefly operated to attempt to cut down on regulations. The office was dissolved due to its limited scope since it was born from an executive order. More effective and lasting ways to arrive at the same policy conclusion of regulatory oversight includes embedding review positions inside state agencies, bipartisan commissions which review existing legislation, or more economic analysts positioned inside an independent office in the legislature to grade regulations and their effects. Not only would these offices help gather more information to determine the breadth and effectiveness of regulations, but they would also help make regulations more effective by finding weaknesses or other government waste.

Kansas should avoid government bloat if the state pursues these new offices. There are also policies that decrease regulatory burdens, but don’t involve new offices. One idea is attaching sunset provisions to regulations, which sets an expiration date on enacted policies. If the policy is working, it can be renewed. If it’s not, it can expire. This sets time limits and priority to addressing regulatory issues that normally are hard to find when it comes to editing thousands of pages of regulation. For every regulation enacted, there could regulation removed. Or, if a regulation imposes new costs, costs from other regulations should be removed. Another simple option is having transparent, open rulemaking hearings where interested people could come in and see regulations being discussed and contribute their own thoughts.

All regulatory bodies should seek to be as effective as possible in their policy implementations. Independent review, more incentives for policymakers to update outdated legislation, reductions of regulatory accumulation, and increased transparency are all goals that everybody affected by regulations would want to see more of. In turn, this would lead to more business growth and a more competitive Kansas economy. Current discussion of high inflation amidst Kansas’ economic recovery from the COVID-19 pandemic has sparked worries about future job opportunities. Regulatory reform in the upcoming legislative session could bring about a boost in job creation and flexibility for businesses to recover and thrive.