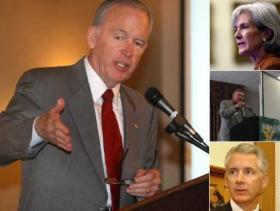 With generous in-kind campaign contributions from media, four former Kansas governors announced the formation of their political organization, intended to “restore Kansas back to fiscal health” by getting candidates elected who ostensibly share their viewpoint.  It’s all too common for politicians of both parties to stretch the truth (to put it kindly) but the sanctimonious hypocrisy in wanting to go ‘back’ to fiscal health ignores the impact their policies had on the fiscal health of citizens.

Responsible journalists would have provided some perspective on ‘the good old days’ but instead, media dutifully wrote what amounts to little more than press releases for the political effort to rid Kansas of fiscal conservatives.  Had media bothered to look, they would have found some eye-opening economic facts from the reign of former governors John Carlin (1979-87), Mike Hayden (1987-91), Bill Graves (1995-03) and Kathleen Sebelius (2003-08).[i] 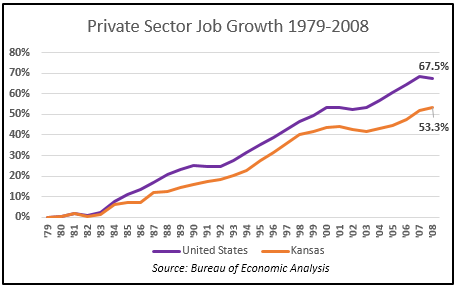 employment grew 53.3 percent between 1979 and 2008 in Kansas, far less than the national average of 67.5 percent.  To put that in perspective, there would have been 132,495 more private sector people employed in 2008 if Kansas had kept up with the national average. 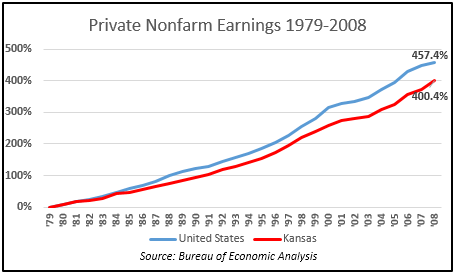 of residence adjustment.  This critical component of Personal Income grew 400.4 percent between 1979 and 2008 in Kansas, but once again, considerably less than the national average of 457.4 percent.   Similar to job growth, Kansas began falling behind under Gov. Carlin and the gap grew progressively worse over time.  The compounding effect of that difference is enormous.  Had Kansas kept pace with the national average, private nonfarm earnings would have been $127.4 billion greater between 1979 and 2008!

While the private sector took a pounding during the Carlin/Hayden/Graves/Sebelius era, government spending exploded.   General Fund spending shot up 532 percent between 1979 and 2008 while inflation was just 183 percent; had spending just kept up with inflation, it would have been $3.4 billion less in 2008 alone.  All Funds spending grew nearly the same, at 527 percent. 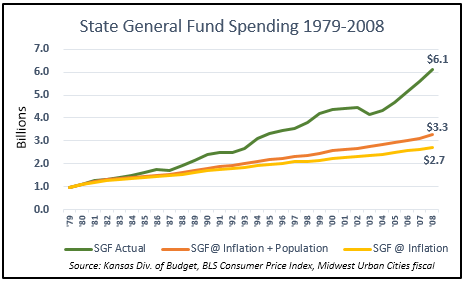 Even adjusted for inflation and population growth, spending would only have grown by 238 percent and would have been $2.8 billion less than actual in 2008.  Over the entire time span, General Fund spending would have been $29.2 billion less if it had just been increased for inflation and population.  The court-ordered school funding increase accounts a small portion of the increase but most of it simply reflects choosing to spend a lot more.  And when governors and legislators choose to spend $29 billion extra, it means they choose to stick taxpayers with $29 billion in unnecessary taxes.

The KPERS under-funding debacle began in 1992 when now-deceased Joan Finney was governor, but governors Graves, Sebelius and Parkinson allowed the under-funding to continue.  And there were also nine school funding lawsuits during the ‘good old days’ (Knowles, Mock, USD 229 and six renditions of Montoy).  Shawnee County District Judge Terry Bullock even ordered schools closed in 2004, although the Supreme Court stayed that order.

Economic stagnation, explosive spending, excess taxation, KPERS under-funding and school lawsuits can’t be blamed solely on the four governors; they had lots of help from legislators in both parties, including several on the masthead of the new political organization (Dick Bond, Rochelle Chronister, Steve Morris, Charlie Roth and Sheryl Spaulding).  But for them to refer to their reign as ‘prosperous’ demonstrates, at the very least, that government prosperity matters more to the members of their new political organization than taxpayer prosperity.

[i] Former Governor Joan Finney (1991-95) is deceased.  Kathleen Sebelius resigned from office in early 2009 to accept a cabinet position in the Obama administration.